The last few weeks have been extremely busy for me with a convalescing doggo (who recently had knee surgery) and studying for an exam but luckily I was able to take a break and spend most of my Sunday at the Denver Pop Culture Con, hosted by Pop Culture Classroom. In case you’re not aware, Pop Culture Classroom is an amazing non-profit which aims to increase literacy and celebrate diversity through the medium of popular culture. They offer guides for teachers, programs for kids of all ages and just generally make the world a better place. So when you come to DPCC, you get the warm and fuzzy feeling of supporting their mission! As per their usual, DPCC hosted an amazing number of panels on every aspect of pop culture from film to comics to books to streaming. Not to mention all of the fun cosplay to see! I was able to catch three panels for Day 3 of the con and my thoughts are broken down below, along with a bit on my general thoughts on the 2019 con.

Adapting TV/Movies to Books and Back Again 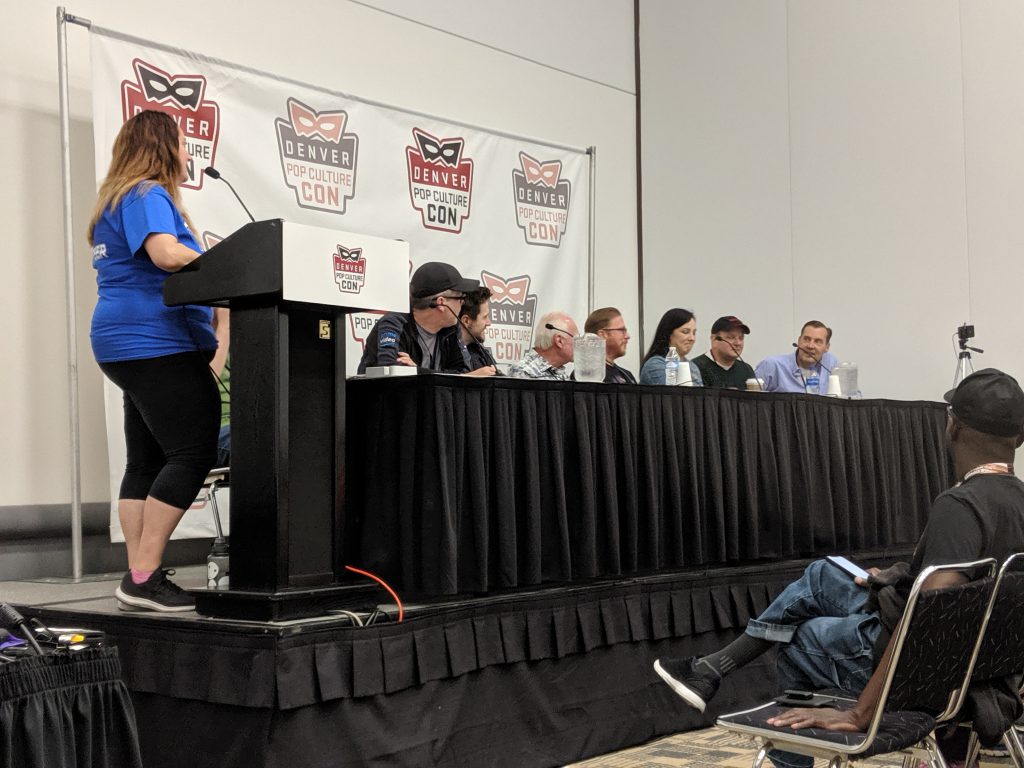 This panel was a very interesting look into the world of adaptations for both books and screen. Terry Brooks, Tyler Corey Franck, Daniel Abraham and Blake Crouch have all written books which have been adapted to TV shows and Pierce Brown’s series was picked up for a movie with Universal and has since been shopped around as a TV show instead after a lot of trials in trying to make it work. Miles Millar and Alfred Gough are screenwriters who have worked both on Smallville and with Terry Brooks on the Shannara TV series on MTV. Delilah Dawson was the lone viewpoint of an author who had adapted already established worlds, Star Wars and Firefly in particular, to books. So this was one of the best panels as far as well-rounded experience and a look at all aspects of adaptations.

This was a great group of panelists who interacted well together and bounced off of each other’s comments to give the attendees a better sense of the process for adaptations and the role of authors in that process. Terry Brooks and Blake Crouch were both immensely pleased with their relationships with the screenwriters, how they’d been able to provide input but basically just had to let go so that the screenwriters could adapt their stories for a different medium. It was also really interesting to hear how challenging screenwriting can be since you have to balance input not only from the authors but also from directors, studios and even actors who don’t approve of the direction that the script is taking their character. All of them really emphasized the level of collaboration necessary to make that system work. And it was interesting to hear how Dawson’s process differed as someone who’s working within an already established IP. And how fast she has to write! Some of her deadlines have been as short as a few months to write an entire Star Wars book, sometimes requiring her to have days where she has to get in 12,000 words just so she can make the deadline! While I haven’t always been the biggest Dawson fan in terms of writing, I admired the dedication and upbeat attitude she had about getting to play in sandboxes like Star Wars and Firefly. This panel was a great example of DPCC’s dedication to provide fans with a new perspective on some of their favorite series!

“What Do I Call a Female Knight?”: Women Warriors in Our Fiction 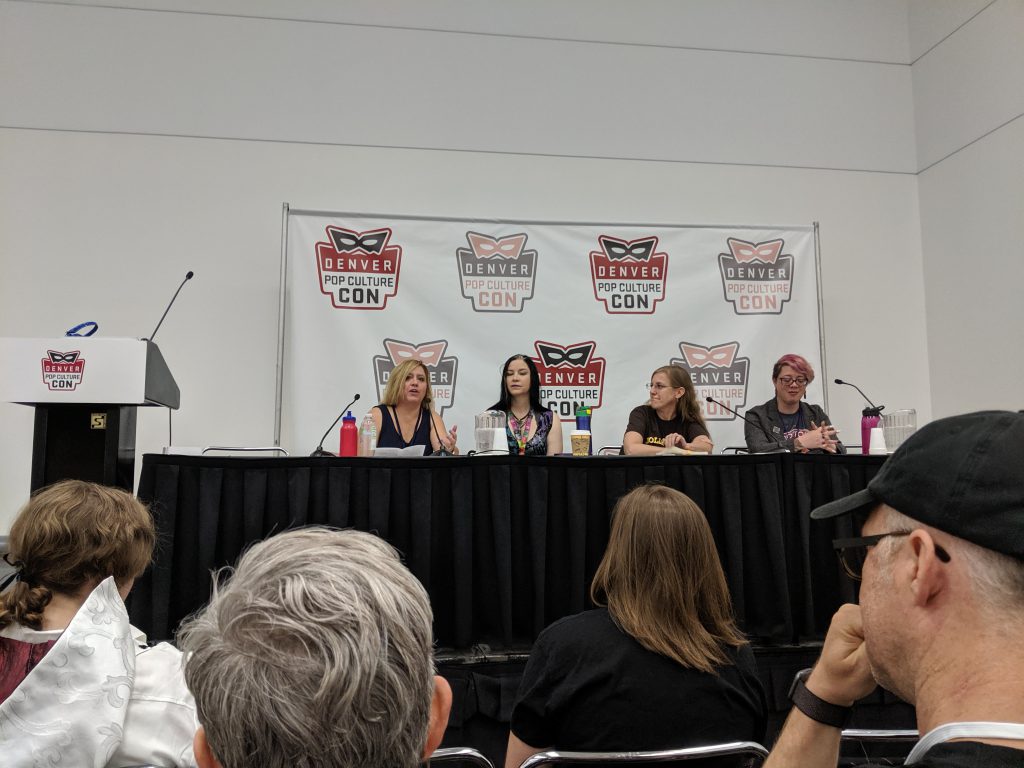 Earlier this year, we saw the end of the massively popular epic fantasy TV show Game of Thrones and whether you were satisfied with the ending or not, it’s hard to deny how much some of the characters came to dominate public discussion. And while the idea of strong female characters is certainly nothing new, characters like Brienne of Tarth helped to renew this idea of how fiction treats female warriors and the tropes often involved in those portrayals. For this panel, several female authors and editors talked about the triumphs and challenges of women warriors in fiction. Carrie Vaughan, Betsy Thornbush and Caroline Kay all write SFF stories of varying types and Vivian Caethe edits a SFF anthology.

As someone who is involved in HEMA and historical re-enactment, the idea of getting asked about whether women really fought is not a new one to me. No matter how many portrayals of historical female fighters we have, Lagertha in Vikings and the Lady of Mercia in the Last Kingdom being just a few, this question never really goes away. I actually was a bit disappointed by this panel. I was hoping to hear about some of the great examples we’ve seen in young adult fantasy and more recent examples, maybe to talk about some of the truly awful portrayals you do see in some of the Game of Thrones characters but mostly the panel centered around a discussion of how to write “strong” characters who aren’t one dimensional creatures. I was hoping for a more nuanced discussion but as Carrie Vaughan said, it’s not like we haven’t been having this discussion for decades. I did really appreciate Vaughan pointing out that there is no hard line between genders. It’s not necessary to make a female knight cry or love flowers to show that she’s got female bits, you can focus on the person and how they present themselves rather than adhering to women are good at this and men are good at this. Despite my disappointment with the examples, I did appreciate the desire for more well-rounded characters, which is often a gripe I have with character development in fiction. And if it’s a subject you’re interested in, I just finished Women Warriors: An Unexpected History by Pamela Toler and it was an amazing exploration of historical women warriors that I’d highly recommend!

Prepare for Mirth: Humor in Face of Fiction 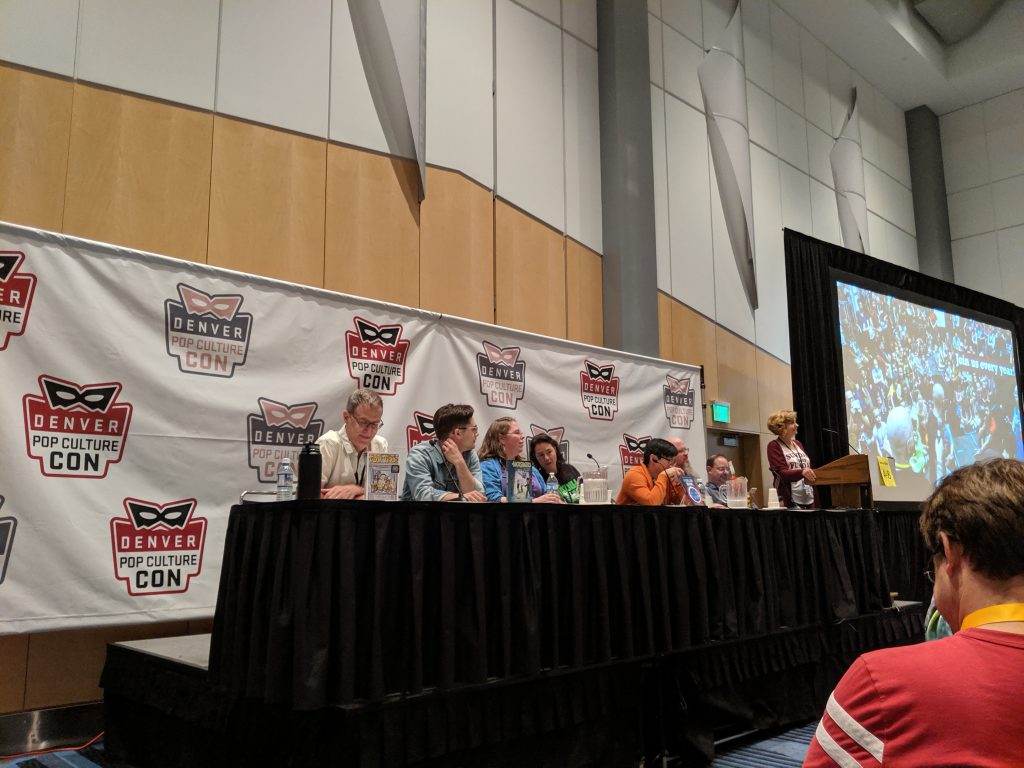 As someone who prefers at least a bit of humor in my stories, I was particularly looking forward to this panel. I’ve enjoyed following Scalzi on Twitter even if I haven’t gotten to read any of his books yet and I enjoy Kevin Hearne’s sense of humor but it was a great introduction to the other authors, all of whom wrote either fantasy or science fiction but for a wide range of audiences from middle grade to adult.

The panel got into a great discussion of how humor can be utilized in fiction and how to keep it from feeling too forced or monotonous which can often be a problem. The panel started off by talking about examples of humor being done right (MASH, Good Omens, Drop Dead Gorgeous, Guardians of the alaxy, Avatar and Tootsie on the TV/film side and Terry Pratchett and Douglas Adams on the book side) and how it can feel when it doesn’t go right. To their credit, the panelists largely used themselves as examples of that second thing or generalizations as they didn’t feel comfortable calling anyone out. The issues that came up over and over throughout the panel was that humor is personal and either works for people or it doesn’t, everyone has their own particular brand of humor and it can even be subjective to the mood you’re in. The panel also had a lot of great advice for aspiring writers. Kevin Hearne (who was a delight) mentioned how a comedic character in his Iron Druid series actually brought fans to tears when they had a very serious moment deep in the series and that it can add a lot of drama to have that change in tone. Scalzi pretty much nailed where some satirical fantasy has fallen flat for me, which is the idea of having a rhythm with your comedy. If it’s just joke after joke after joke, it becomes monotonous. There needs to be time for recovery in between the humor or it just ceases to be funny. It was also super interesting to hear how being a humorous writer changes the writing process. For several of the authors, Julie Wetzel and Andy Mientus in particular, they rely on beta readers or editors to let them know if a joke is actually funny because after enough times of looking over it, they can’t tell anymore. While it’s unlikely that I’ll be turning into a humor writer any time soon, it was fascinating to hear about the process and their thoughts on humor in general. Not to mention giving me a whole new list of books to check out!

There has yet to be a year where I came away from Denver Comic Con/Denver Pop Culture Con disappointed. Two years ago, there was an incredible line-up of comics panels but not that many authors. Last year, there was an amazing line-up of authors panels but slightly fewer comics. And this year, it was a pretty good balance even though I wasn’t able to catch any of the comics panels due to RL intrusions. I’m hoping that DPCC continues to really support the comics and author panels because it’s truly amazing to see the educational level that they offer. I talked to Katherine Arden (who was at DPCC last year) earlier this year and I remember her saying how DPCC was the first con she’d been to that focused so much on panels. As a con-goer and fan in general, I can’t express how much I appreciate that focus! And I’m already looking forward to seeing what’s in store next year!