Skip to content
Home » The Living Card Guy: Myths and Legends of Jewelry

Myths and Legends of Jewelry

Today I would like to talk about how excited I am for the Legends of the Five Rings announcement that happened! We have all been waiting for a while to hear more about the LCG reboot of this game and a lot of information has come out in the last week or so. We have the announcement article from FFG. We have the Team Covenant interview with the design team. We also have a general influx of new people creating content around the announcement, like me! It is an interesting time to be in the gaming world and this article will let you know why. Also, yes I am aware the Five Rings is not like the Mandarin’s 10 rings of power, but it was a funny joke.

Actually let’s start there. Legends of the Five Rings is a game about pitting your nations military might and political prowess against 6 other nations in the world of Rokugan. The world of Rokugan is a more mystical version of ancient Japan. The five rings aspect comes from the idea of the five elements referenced in the book written by the swordsman Miyamoto Musashi. He wrote about the five books (in addition to the rings) which are represented by the elements Earth, Water, Fire, Wind, and Void. In the game, the five rings represent the effects when you resolve a conflict. If you choose earth, you get a different effect than if you choose fire. Those effects are not known at the moment, but it seems like an interesting and different way to integrate the rings into the game. I say differently because in the CCG the rings were actually cards that represented a win condition. This is one of the many shifts in the game and different people have different opinions about those changes. I don’t think this is the first time I have used this image but I ain’t changing now!!

Before I go into more of the criticisms of the game’s changes I would like to discuss all the changes I noticed. As mentioned before the rings are no longer a win condition, they are part of the conflict phase. Honor is the victory currency of the game. If you get 25 honor you win the game, if you ever hit 0 honor you lose. Honor as a win condition is similar to the old game, but the large change is how you bid honor at the beginning of the round to draw cards; for each honor you bid you draw one card. If you over-bid your opponent you will owe them the difference in honor but still get to draw all your cards. Finally, the characters you play from your dynasty deck are no longer permanent. What does that mean you ask? Well in most games once you pay for a unit or character you get to keep it in play until it dies. In this game you have to invest in your characters using fate. In order to play a character you have to pay its fate cost, then for each extra fate you spend on the character it will stay out for additional turns. A lot of these changes have people either really excited or really offended. Let me explain. 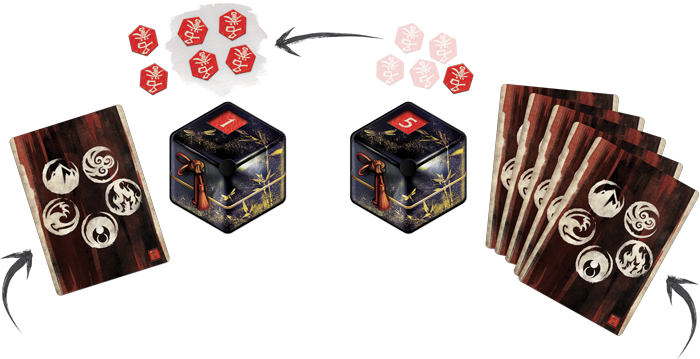 People I have talked who are new to the game or that only played it for a bit seem too excited to see what FFG has put together. Lack of card permanence on units and bidding to draw are both very interesting mechanics on their own. Do you over-invest in a unit and have less fate to play your other characters or just play a unit this turn and save your fate for later? Do you bid lots of honor to recoup your hand but lose a stable grasp on victory, or do you take it easy and go for an honor win? Interesting questions arise from both of these mechanical changes. However, players of the CCG who were very invested in the old culture and metas for L5R seem off-put and offended by the changes. During a discussion with a friend, he brought up how bidding honor goes against the theme of the game. Honor is the most important thing in Rokugan and bidding it as a mechanic seems like a misunderstanding of how it works. Also the five rings being a win condition was a whole mechanic around which decks were built, but a lot of the decisions FFG made were to “speed up” the intensity of the game. In the Interview with Team Covenant Brad mentioned the best part of the game being the epic conflict, and how their changes try to focus on getting to that. During the discussion I had, it seems like that was a misunderstanding of the best parts of the game.

See, the main thing we changed was the art! Now all the characters look more like their HBO counter parts!

It is interesting to see how people react when their old favorites are redone. We also got to see some of this reaction when AGOT 2nd edition got released. In the past FFG has taken two other CCG’s and made them into LCG’s. This was far before my time, but I would be interested to hear more about that, so if you know about the Call of Cthulhu transition or the AGOT CCG transition comment and let me know if we saw similar backlash? How do you feel about the Legend of the Five Rings announcement? Excited, pensive, angry, tentative? Let me know in the comments as well. Living Card Guy out!