Continuing my adventures into the nostalgic past, I find myself actually wanting to discuss a game that’s particularly close to my heart. But this particular game, dear friends (or associates, colleagues, indifferent subjects, whatever) needs to be investigated from the ground up. I am referring to the legendary Nintendo series, StarFox.

Point 1: The First of its Kind

Originally released on the SNES, this game was very different from most of its kind. I don’t remember many Flight Combat simulator games being half as successful and quite as cool, with a legendary set of badass pilots. You, of course, play as the titular character, Fox McCloud, who is a phenomenal pilot of the experimental AR Wing. You’re flanked by the three exceptional members of the Star Fox team, Peppy Hare, Slippy Toad and Falco Lombardi. You fly along side them, which was an interesting concept for games at the time. See, there are small scripted sections where Falco, Peppy and Slippy will actually come up on screen alongside you and fight too, shooting down certain enemies. Occasionally, they’ll get into trouble and a few enemies will tail them, and you’ll have a few limited opportunities to shoot their bogeys down. 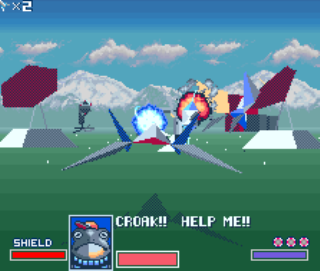 Remember this. This is important.

It also introduced another sweet concept: branching paths. Which brings us to…

Point 2: Where Angels and Toads Fear to Tread 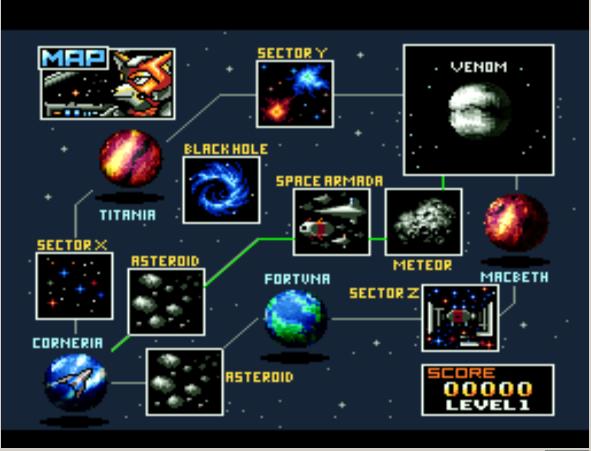 I knew I shoulda toined left at Albuquerque!

To this day, that friggin’ map vexes me. Which way do you choose? Do you take the shorter path through the Asteroid Belt and Space Armada and Meteor, which swarms you at every level with vast numbers of powerful enemies? Or do you take the relatively “easier” path, through Fortuna and the Scottish Play, with a stop in Sector Z? Or are you among the Elite pilots who can fight their way through the slaughterhouse that is Sectors X and Y, and the death world Titania? Or do you take the secret shortcut through the Black Hole? Is it too risky? HOW DO YOU CHOOSE??

Regardless, all paths lead to Venom, the home base of the warlord Andross, who in this game is a giant silver… face.

This is the final boss. He sucks. I mean that literally.

Andross is actually an Ape of sorts, and apparently a mad scientist as well. (It was the 90’s, every badguy was Science based). His aim: to gain control of the entire Lylat system. And who can stop him? Only a badass team of mercenaries led by you, Fox McCloud! Let’s get it on!!

So again, this gave was very innovative for its time. The graphics were implemented in a new way using 3D polygons instead of direct pixel art, which actually led to the invention of the Super FX chip, which changed a lot of how the Super Nintendo cartridges handled games. Not only that, but the gameplay is really awesome and fun, and had interesting consequences to the choices you made. Like rescuing your teammates! I mentioned that very briefly, but there were actually very real consequences for not rescuing Slippy or Peppy when they get in trouble. See, you don’t save them and they keep taking damage, they die. They straight up die. You get a brief message from them as they crash and explode on-screen in front of you. Those guys don’t have extra lives. When they’re gone, they’re gone. It wrenched my young heart the first time I lost Slippy, and the second time I saw Peppy get shot down, I vowed blood vengeance oaths that carry to this day. I swore that I would take down the ones who destroyed my comrades! But the original StarFox was pretty unforgiving and I sucked something awful back then. I was about to throw in the towel and hang up my AR Wing pilots license for good… until a transmission broke crackled through my communications system, and I heard a growling voice bark over radio… “Can’t let you do that, StarFox!”