“Ghost” is a metroidvania where two super hackers hire a mysterious agent in order to infiltrate the Nakamura Space Station and steal the greatest electronic secret ever. Of course, the space station will defend itself, which is where the fun begins: the station’s defenses, with their never-ending arsenal of weapons and artifacts, will have to be destroyed. But the story gets more complicated when the hackers find out about their agent’s hidden ties… 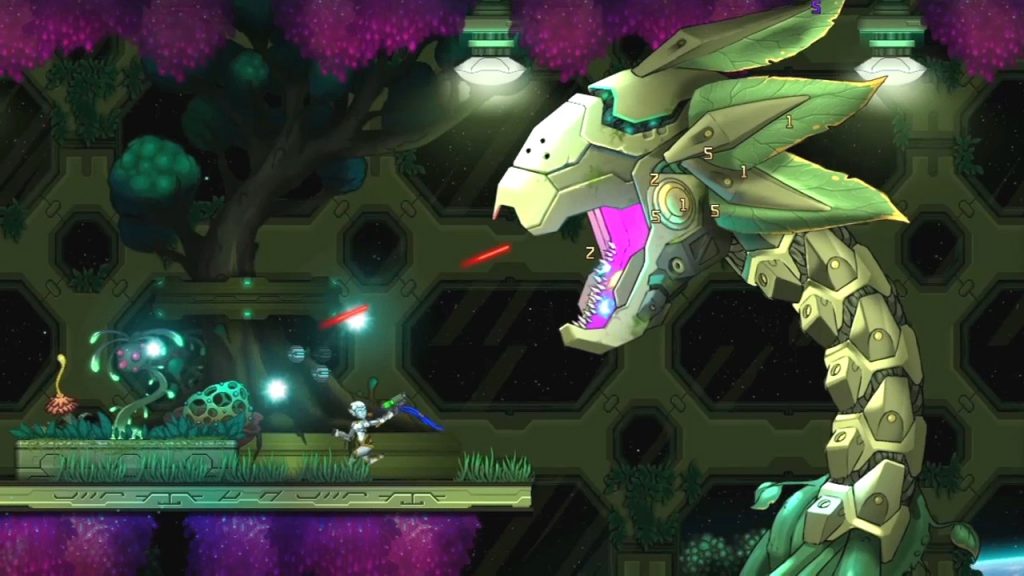 Ghost 1.0 starts out with you being shipped in a create up to a massive space station.  You are a human ghost inhabiting a robot chassis and you are on a mission to explore and uncover the secrets of the space station.  The station is owned by the Nakamura Corporation who design and build intelligent humanoid robot workers.  You are hired by two awkward nerds, Boogan and Jacker, to get the source code for the humanoid slaves.  You will end up uncovering pieces and parts of your own history and of the corruption of the evil corporation.  It’s really a fun sci-fi story and I was genuinely interested in the characters and what happens throughout the game. 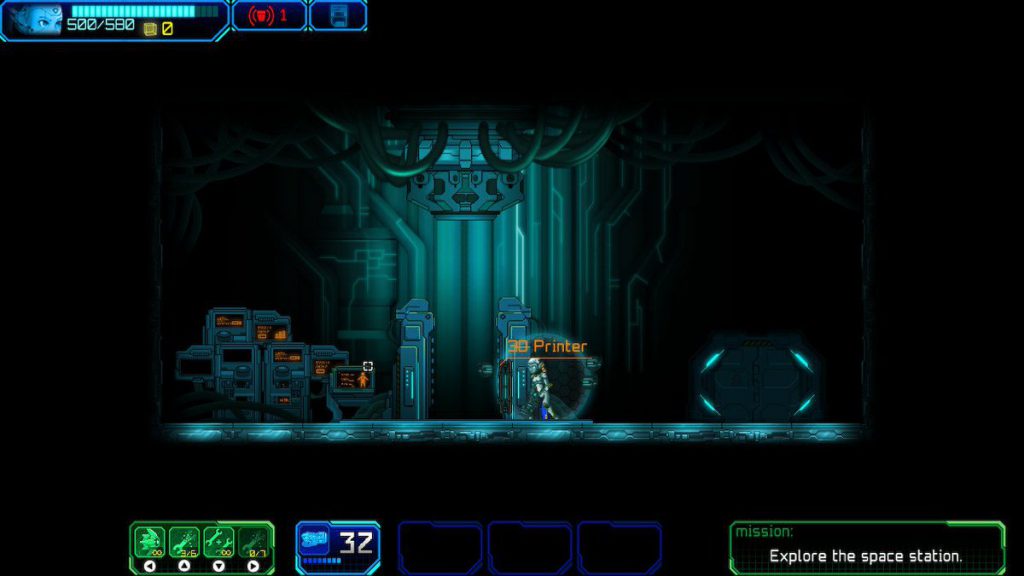 The graphics in Ghost are sort of cartoon like rather than an old school pixelated.  The characters during the cut scene are animated very well and there are scenes of the city and news playing, telling some pieces of the story.  The voice acting is pretty good, each character is well thought out and fits their place in the story perfect which I felt helped tell the story even better.  Many independent games these days rely on the player finding notes and things to tell the story, this game took the exact opposite approach and straight up tells it.  The sound track is nothing super extraordinary but fits the mood well throughout the game. The sound effects compliment Ghost’s different weapons and the various enemies nicely. 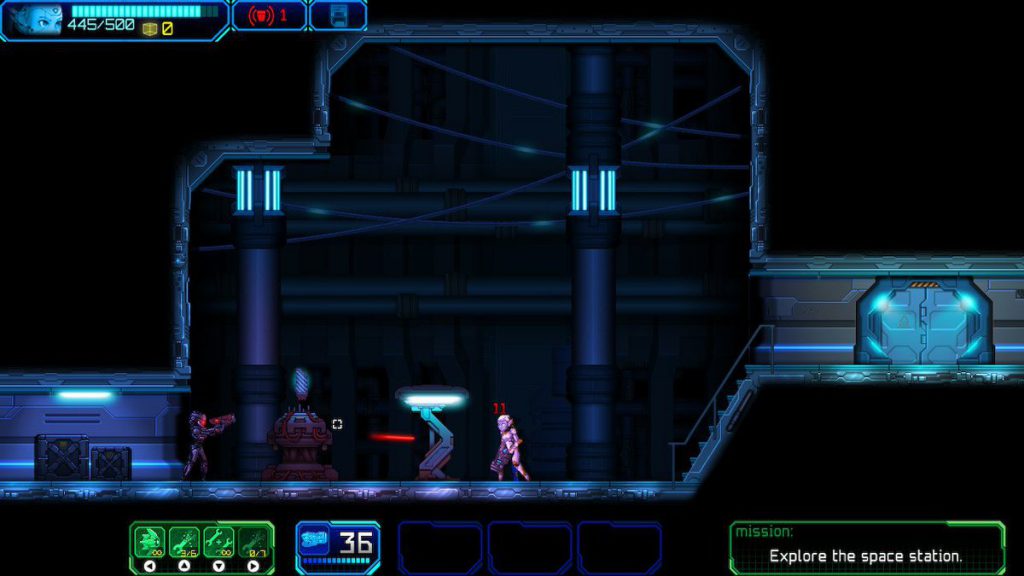 The game play in Ghost is very addicting.  It is a metroidvania, you will be exploring the space station, and coming up to places you will not be able to access until you unlock more items and skills.  The control scheme is interesting as you will move with the left control stick and aim your weapon with the right. You can jump and roll to avoid enemies while still aiming and shooting.

You have a standard laser type pistol as your main weapon which just shoots one laser per touch of the fire button and various other guns that you can purchase and upgrade throughout the game.  Each weapon is different and it lets you experiment and try new load outs. You always have your main weapon, and you can hold 3 secondary weapons at all times though there are more like 20 to 30 extras( I did not count, and I never bought them all)  You can switch though the secondaries with the press of a button. Some are shotgun style, some toss bombs, and some are lasers. There is a massive variety. You can upgrade your main weapon and your skills as well. Enemies are all robotic and vary from small droids to massive tank like bots.  There are also pretty boss battles every once it a while as well.

When you get an upgrade you will have it as long as you manage to save your game before you die.  The save system is very clever as you scan your current bot and it gets saved to the nerd’s database down on Earth.  When you die your bot gets destroyed, but the save locations in the game are 3D printers so the last saved copy of your bot gets rebuilt and you, being a ghost, re-inhabit the newly printed android.  Which brings me to another neat game play mechanic, leaving your bot. You can leave your main bot any time and inhabit an enemy bot to destroy others or open doors from a distance. If your bot gets destroyed you just go back to ghost mode and can inhabit a different enemy or return to your own bot.  It lends to a really fun style of play, and you can pour in skills to make it really fun. You have multiple skill trees, this being one. Another being your related to your nerd friends on earth and how they help you, and the space station. You unlock a skill every once in a while when you are searching for new key cards to unlock more areas to explore.

To buy weapon upgrades, you will be collecting energy boxes from enemies.  There are rooms that you have to trigger an alarm to pass (or you can re-trigger them later just to kill the enemies).  You have to stay alive and kill the incoming bots while Jacker tries to disable the alarm from his post. You will end up getting a large chunk of energy to upgrade and buy weapons after you finish the rush.  When you are done, after a certain amount of time the room resets, but has a higher alarm level, which means it is more difficult. There is a cool risk/reward with going back to rooms at higher levels. If you die, you lose all of your energy and there is no way to get back what you lost, only go find more.  You have to spend it before you die. It made going back over the space station, fast traveling through various 3D printer locations, to get more and keep upgrading, but there were moments where I lost a considerable amount of energy that was pretty upsetting. It can get pretty difficult traversing the space station, as there are enemies in almost every room, as well as laser defense systems.  It was a blast regardless. 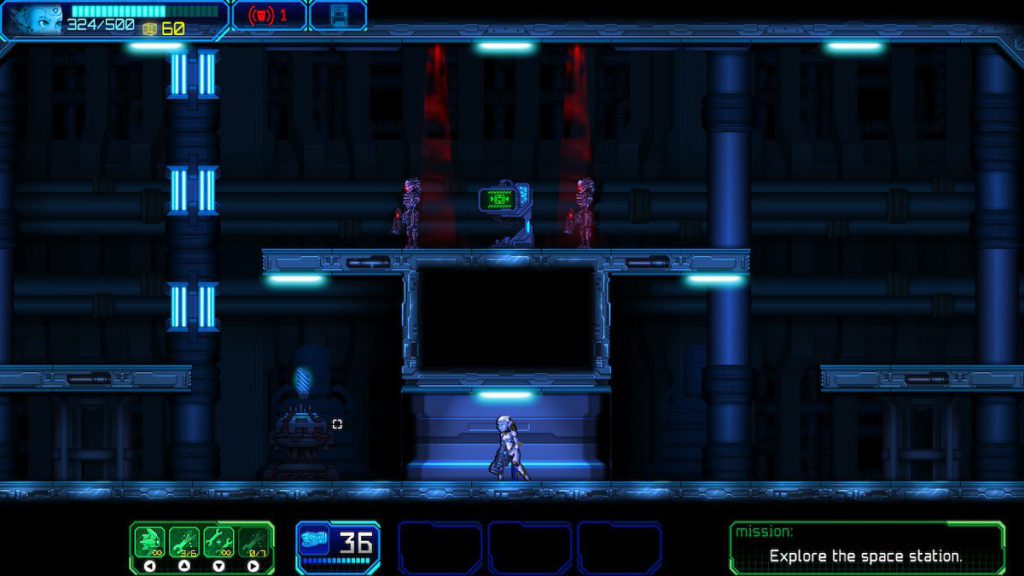 Value was high with this game.  I got it on sale for only 4.99 and it took me over 15 hours to finish the story line.  That was mostly following the plot, but I did go back and earn more energy for upgrading a few times which took up a good chunk of time.  If you really wanted to get every weapon and upgrade them all, you could probably spend 20 hours plus at least playing from start to finish.