April’s been a bit of a rough month for me, between being out of town and getting sick so I’m finally getting back to my regular reviews this week with a look at a new series by an old favorite. A few years ago, I read a series written by John Layman and illustrated by Rob Guillory called Chew. It was a delightfully odd, twisted tale of a food detective and a massive conspiracy and I very much enjoyed the series. So when I heard that Guillory had his own project, one that went the idea of a farmer whose very special crop just so happens to be home-grown human organs, I couldn’t resist. And if the title sounds familiar, I mentioned the new series last year in one of my monthly round-ups of new comics that I was excited about. Farmhand is written and illustrated by Rob Guillory, with colors by Taylor Wells and is published by Image Comics. The first issue came out back in July 2018 and the series finished its first arc with the fifth issue, all of which have been collected into the first volume, which is what I’ll be talking about today. 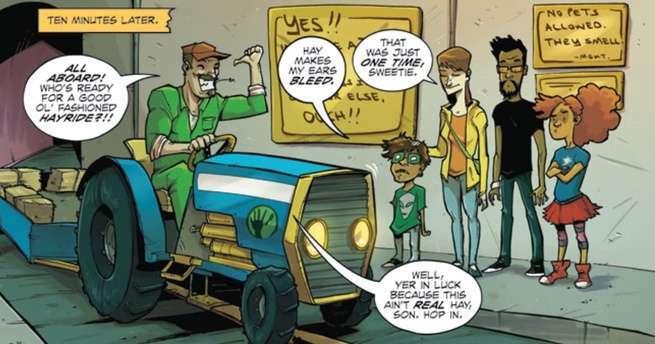 Not your usual kind of farm tour however.

After leaving his father’s house as a young man, Ezekiel “Zeke” Jenkins has returned home to Louisiana with his family while he struggles with both his own demons and the lack of a job. But the Jenkins Family Farm is unlike any farm you may have seen. Rather than growing regular crops like wheat or corn, family patriarch Jedidiah Jenkins and the revolutionary “seed” that he developed years before have led to the development of highly customizable human organs which can be grown in a very specialized group of plants. Jedidiah Jenkins has a bit of a mixed reputation around town, not to mention some rough patches to heal with his son Zeke, but there’s more than just that to worry about. There’s a dark side to Jedidiah’s seed that looks about ready to wreak some havok for the Jenkins and Zeke may have returned home just in time to see it all happen. 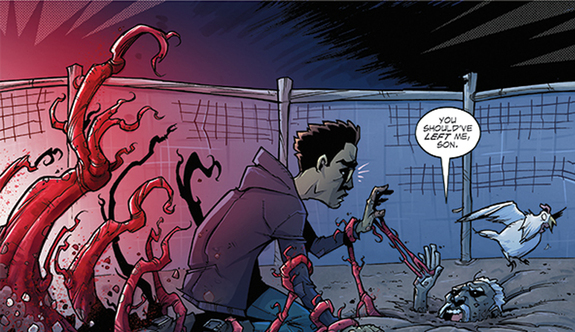 So gross. And yet, I want to know…

As someone who enjoys a bit of horror, particularly when it involves monsters or otherworldly things, I really liked the idea of human organs being grown from a seed which some heavenly body gave to Jedidiah Jenkins. It’s an intriguing concept and the Jenkins family are an interesting group. I appreciated that both Zeke and his sister Andrea have their darker sides and their own needs and ambitions which don’t always line up with their father. And their father has a bit of an under-handed feel to him throughout the story that kept me curious about what was really going on. The first half of the story built really well and had me curious to know more but unfortunately the story stalls out about two thirds of the way through and almost feels like it drags as it gets toward the end of the arc. By the end of the final issue, Guillory lays the groundwork for a potentially very disturbing outcome and it was enough to entice me to read more but I couldn’t completely fall in love with the story.

I really liked Guillory’s artistic style back when I was reading Chew and I enjoyed it just as much with Farmhand. The comic, larger than life way that he draws the characters and the action packed panels made Farmhand a lot of fun. And you know a writer is also an artist when there’s jokes hidden all over in the panel’s art. Wells doesn’t go lightly on the colors either and the vibrancy is a perfect match for this odd, creepy story.

If you were a fan of Chew or even just like oddball horror stories, Farmhand is an intriguing one that I’d recommend, even if I think it might drag a bit. I’ll be very curious to see where Guillory takes the story and whether it can maintain a better pace in future arcs. It has promise and I look forward to some organic mayhem in the next one!