Happy 2019! Now that the stress and business of the holidays are behind us, it’s natural for most of us to look forward to a new, hopefully improved 2019. Even if 2018 was a good year for you (as it was for me), here’s hoping things just get better. For me, the start of the new year means looking back on what I accomplished in the last year and what I want to change for the next one. When it comes to Graphic Reviews, I’m pretty pleased with what I accomplished this year. In total, I read 30 new (at least to me) graphic novel series and kept up with some old favorites. And 2019 looks to be full of more and hopefully just as awesome choices! So for my first article for 2019, I wanted to talk about my three favorite reads from this year and three of the stories which I’m most looking forward to in the new year. It’s a slight departure from my usual first of  the month post but it seemed like the right time to talk about my “best of the year” lists.

Not all of these graphic novel series came out in 2018 but since that’s the year in which I read them, I’m counting them anyway. Two of my three choices have previously been reviewed for Graphic Reviews so I’ll limit myself to explaining why I picked them as a favorite rather than writing a normal review of them. If you’re interested in knowing more, I’ve linked two of the three to my reviews. For the other one, you’ll just have to settle for the shorter review. I am, after all, only human. 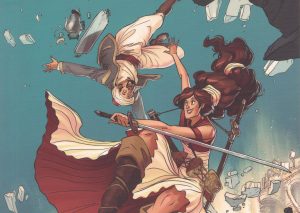 Delilah Dirk follows the adventures of, as you might have guessed, a swashbuckling young woman named Delilah Dirk. In the first adventure, Delilah met and befriended a Turkish man, Selim, who becomes a loyal friend and fellow adventurer. While there are certainly plenty of good adventure stories out there, Delilah Dirk combines humor, adventure and a wee dash of history for a rollicking good time! While often not terribly realistic, the series is fast-paced and fun if you don’t worry too much about the details. In addition, I appreciated that the main character, while clearly capable of taking care of herself, isn’t always one hundred percent likeable. She’s vain, she makes mistakes and she lets her temper get the best of her. While it’s great to have strong female characters, it’s even better when they feel human, with all of the flaws and foibles that that entails. It’s both for the entertainment value and the well-rounded nature of its heroine that Delilah Dirk made it to my top three choices for 2018! 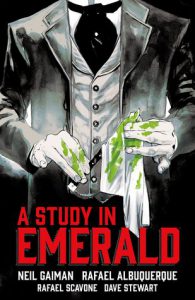 A Study in Emerald is actually the graphic novelization of a Neil Gaiman short story of the same name. In Gaiman’s twist on both Sherlock Holmes and Lovecraftian mythos, Holmes and Watson have been brought in to investigate a bizarre murder which has stumped Scotland Yard and which is directly tied to the Queen Mother herself. To tell too much of this story is to ruin its impact. I went into the story knowing only that it combined Sherlock and Cthulhu and was both surprised and pleased at how well Gaiman blended the two together. Not to mention that it’s accompanied by Rafael Albuquerque’s incredible illustrations. It’s a very quick read but one I would highly recommend to horror fans, particularly those that enjoy the dark, creepy mythos of H.P. Lovecraft. A Study in Emerald will likely remain among my favorite graphic novels because as usual with Gaiman, it’s an excellent twist on a rather dark, fantastic tale. 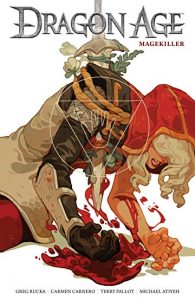 Dragon Age: Magekiller is a mini-series which takes place in the universe of the Dragon Age videogames, particularly the setting created by the most recent game, Dragon Age: Inquisition. The story follows a pair of mercenaries, Marius and Tessa, who hire themselves out as a team which can deal with rogue magical users, for a price. When they are forced into a job for which they have little taste, Tessa and Marius join forces with the Inquisition to try to bring order back to the world. I have made no secret of my deep love for the lore of the Dragon Age videogames but I have to admit that I was surprised at how much this story still remains among my favorites. Whether the creative team meant to or not, Magekiller assumes a base level of knowledge of at least Inquisition, if not the other Dragon Age games. If you read it without that, it’s likely to get a bit confusing. But what I love about the series (and why it’s my pick for favorite of 2018) is how it takes that game knowledge and creates a story which both fits into and expands the lore of the game. Tessa and Marius are not perfect individuals but they work almost perfectly as a team, even if it took them a lot of work to get to that point. They are each tied to beloved characters in the game and lend that much more humanity and history to the events of the game to which they are connected. For fans of the series, it’s a compelling and eye opening story that shows the impact of a group like the Inquisition. If you’re a fan of the games, I’d highly recommend it!

Most Anticipated Graphic Novels of 2019

While there’s a lot of really great stories slated for 2019, I had to narrow it down to the three that I’m most excited to get my hands on right now. Somehow, they all ended up being from Image Comics. Given the great stories they’ve published in the past, that’s probably not too much of a surprise. 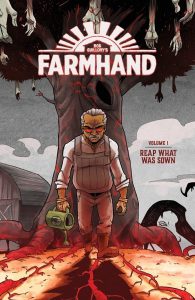 Written and illustrated by Rob Guillory, Farmhand tells the story of a simple farmer named Jedidiah Jenkins. Of course, simple doesn’t mean “your usual crops.” Jedidiah grows organic human organs for transplants that just so happen to be both fast healing and customizable. But the Jenkins Family Farm hides some dark secrets and some of those secrets are about to bear rather dark fruit. I was a big fan of Guillory’s work on Chew (another darkly comedic, food-centered story) so it doesn’t take a lot to get my interest on this title. But the idea of being able to grow organ transplants like one would soy or corn makes it even more enticing. Farmhand promises to be a dark, creepy take on scientific advancements and being careful what we wish for. The first few issues of this series are already out but the collected volume will be published in a few weeks, on January 16th. 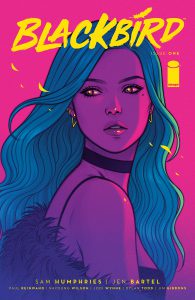 Written by Sam Humphries and illustrated by Jen Bartel, Blackbird introduces readers to a Los Angeles that is both familiar and fantastic. Classified as a “neo-noir fantasy,” Blackbird pits a troubled young woman named Nina Rodriguez against a shadowy cabal lurking just under the surface of L.A. Can Nina track down the truth of the cabal before she gets herself in even deeper trouble? I’m not familiar with the previous work of either Humphries or Bartel but I’m a sucker for noir and fantasy seperately and deeply intrigued at the idea of the combination. The gorgeous look of Bartel’s art certainly doesn’t hurt. The first few issues of this series are already out but the collected volume will be published in May 2019. 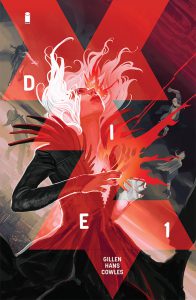 Written by Kieron Gillen and illustrated by Stephanie Hans, DIE is the story of a group of friends dealing with what Gillen himself calls “Goth Jumanji.” Now well into adulthood, the friends must deal with the return of a horror which they faced back in their roleplaying days as kids. They barely survived the first time, can they really face it again? Even without reading it, DIE makes me think of some weird lovechild of It and Stranger Things and just thinking about that made me feel more excited about reading it. I haven’t universally loved Gillen’s writing and Hans is completely new to me but I would probably commit murder to get my  hands on DIE. Nerds + roleplaying games + fantastical horror = a salivating Cait. The first issue of the series was released in December, with more to follow this year!

So those were my favorite and most anticipated reads for the new year! If you haven’t read them, I hope it might inspire you to add them to your own lists. Did I miss any that stole your heart in 2018 or that you can’t wait to get your hands on? Let me know in the comments and I’ll add them to my list! Until next time!