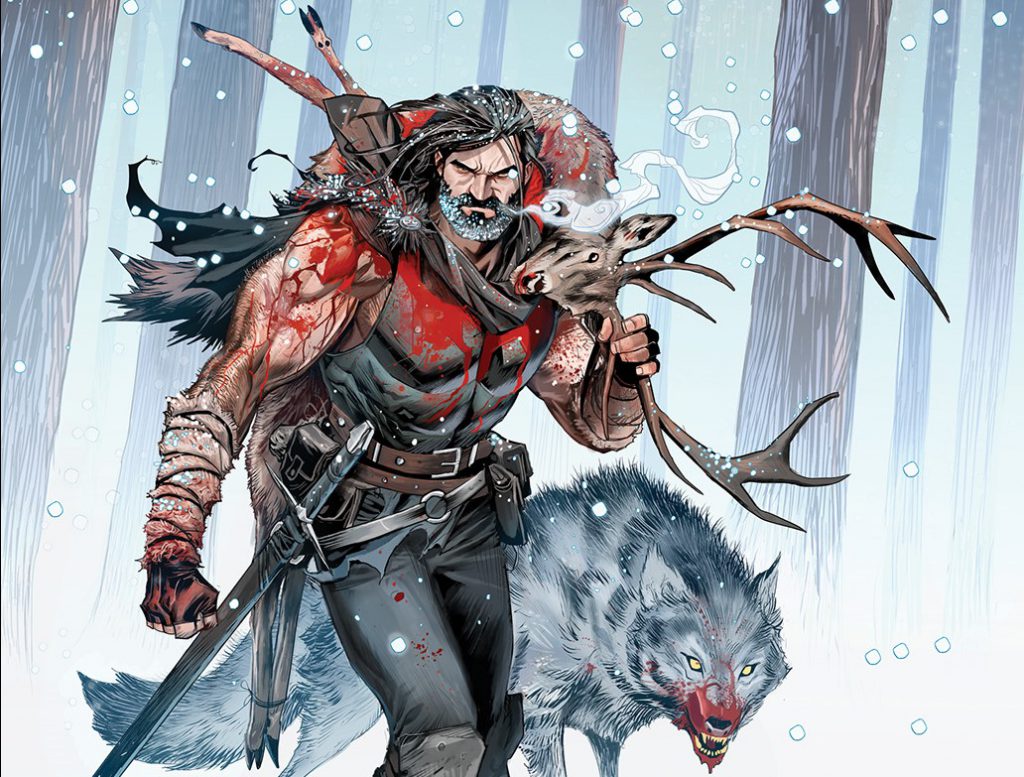 Ready or not, it’s coming…Christmas time! That time of year that we all desperately shop for the perfect gift, get together with family members and friends whom we love (and perhaps those we don’t) and cook extravagant feasts. Or, that’s what the story books tell us anyway. Christmas of course means different things to different people but at heart, I think many of us still enjoy the idea of Santa Claus, even if we no longer believe. There’s just something about a jolly old man who exists largely (pun intended) to spread joy and happiness that’s hard to resist. Although I’m a bit partial to Death as the Hogfather myself. In the series Klaus, Grant Morrison and Dan Mora give us a slightly more epic version of Old Saint Nick. Since I’m also a proponent of “Die Hard is a Christmas movie,” I figured that the week before Christmas was a perfect time to introduce this recreation of the Santa myth to y’all. In this review, I’ll be talking about the original Klaus mini-series which was published by BOOM! Studios from 2015-2016 as well as the two one-shots, Klaus and the Witch of Winter (2016) and Klaus and the Crisis in X-Masville (2017). Onward to the holiday cheer! 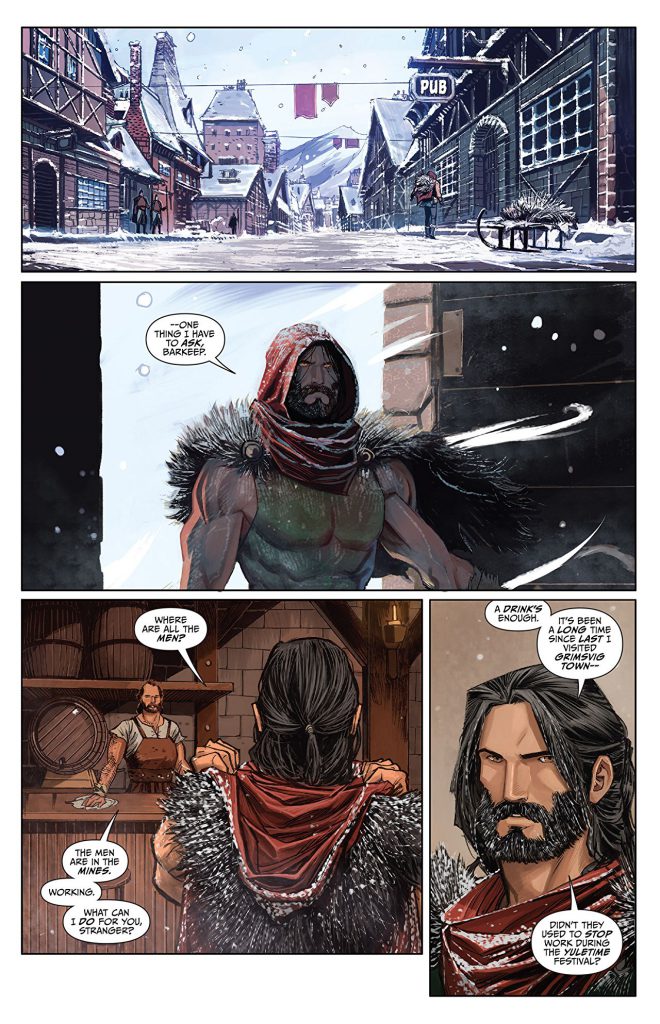 He is perhaps a little more Geralt-y than you may remember.

Klaus opens with the arrival of a wild man named (as you might have guessed) Klaus in the medieval town of Grimsvig. While the town was once a cheery, fun sort of place, it has quickly taken on more of a Game of Thrones quality. Since the death of the old king, a tyrannical rule has settled over Grimsvig, denying its people all manner of pleasures, down to outlawing the very existence of toys. In addition to being a rather bummer of a town, the men of the town are forced to work in the mines for a secret project of King Magnus, who appears more and more unstable as the years roll by. When Klaus discovers the depths to which the town he used to love has fallen, it’s up to him and his loyal wolf Lilli, to set it right. And thus begins the story of Old Saint Nick, if a bit more badass than you might remember. 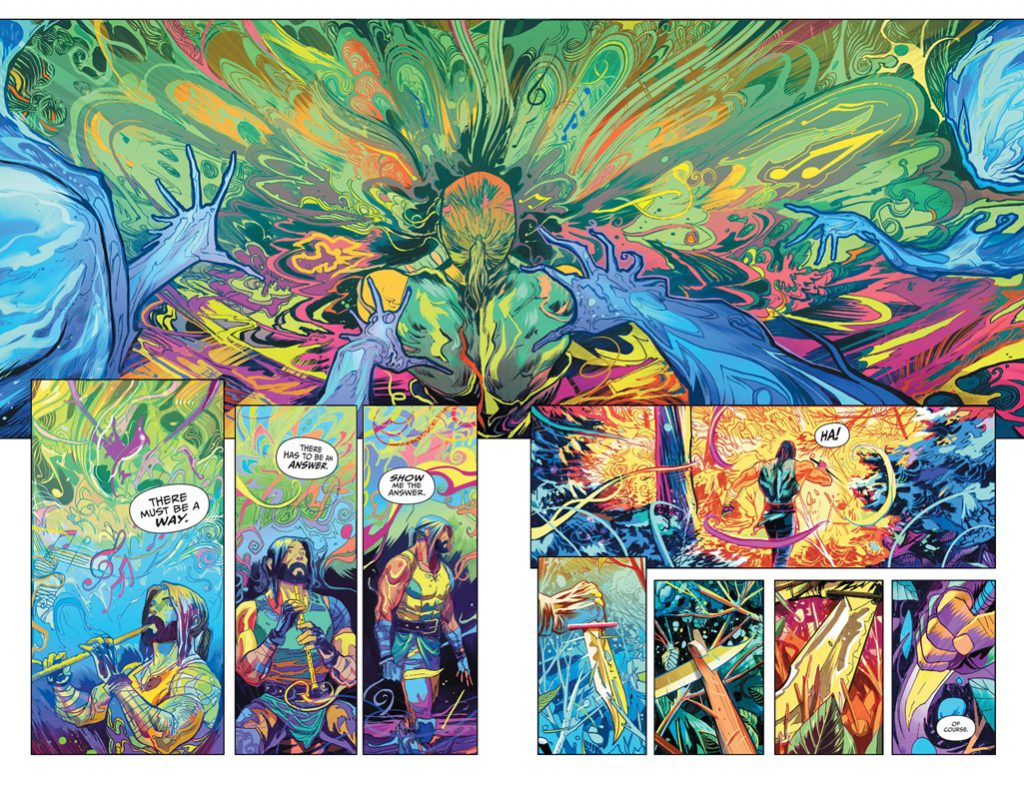 It wouldn’t be a Morrison story if it didn’t have weird aliens in it somewhere.

The original series by Morrison and Mora reads very much as a Santa Claus: Year One. Over the course of the story, readers discover Klaus’ history with the dreary town of Grimsvig and how his old love of it shapes his determination to not let it go to ruin. The tone of the story is part epic action, part holiday heart and part insanity. There are references to all sorts of winter holiday myths, from Disney’s beloved winter movie Frozen to the ever creepy, child-stealing Krampus. Throughout, it strikes a balance between silly and entertaining that it largely manages to maintain without becoming too over-the-top or gimmicky. When I originally picked up the series, I’ll admit that I was expecting it to be terrible. And while Klaus isn’t the pinnacle of storytelling, it’s pure, cheery fun in a way that I think many graphic stories have forgotten they could be. Klaus gets compared to superheroes a fair bit in reviews but I think Klaus’ appeal is largely in that it’s a story of heroes rather than supers with capes, and a man who can’t turn his back on a town he loved. There’s heart along with all the action in Klaus and I enjoyed every bit of it. Although I will admit that the bit with the aliens was simultaneously strange and jarring. The art however is fantastic throughout. I wasn’t very familiar with Mora before picking up this series but Mora’s art is a perfect complement to the tone of the story and he well deserved the Eisner nomination in 2017 for his pencilwork. 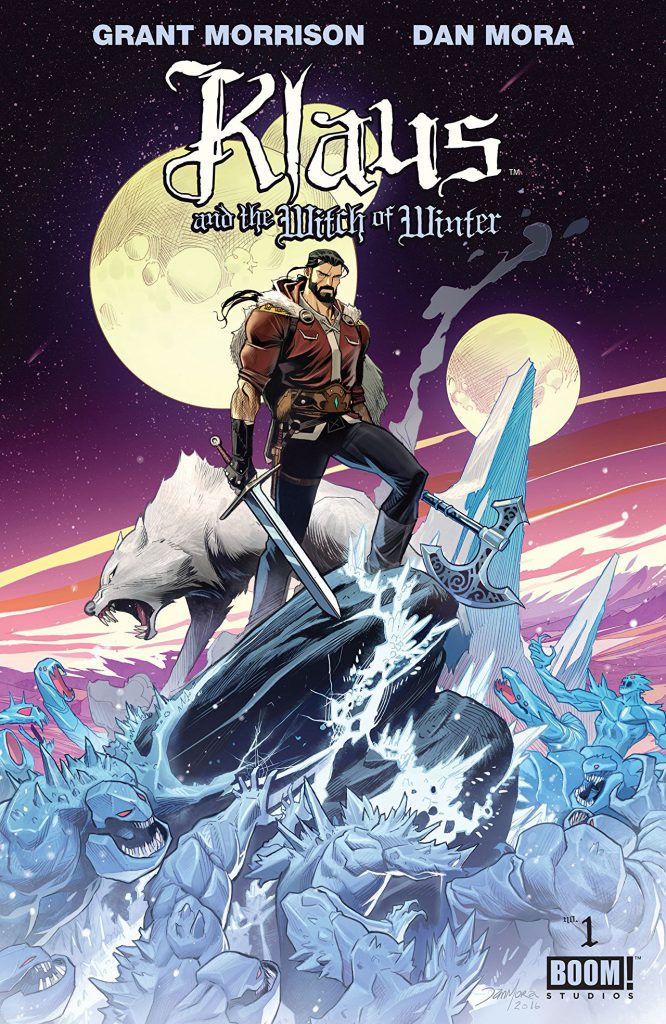 The first one-shot, Klaus and the Witch of Winter, takes place in roughly present day as Klaus returns to Earth after decades imprisoned on the moon and discovers that a witch is stealing children. After promising to get them back, he and his wolf Lilli follow the witch’s scent back to one of his first workshops. Lying in wait is the Witch of Winter, and she has some rather icy plans for Santa Klaus (and the rest of the world). It’ll be up to Klaus and some old friends to put a stop to her.

The second one-shot, Klaus and the Crisis in X-Masville, takes readers back to the 80’s, when Klaus is summoned to help a family in trouble. The family has disappeared in a town in which it is always Christmas and is populated by some super creepy Santas. As Klaus and Lilli investigate, they discover the other side of Klaus’ coin: an evil Santa who has made a deal with an equally evil corporation to gain power for himself and his alien allies. Yes, you read that correctly. And no, it doesn’t make much more sense when you read it. 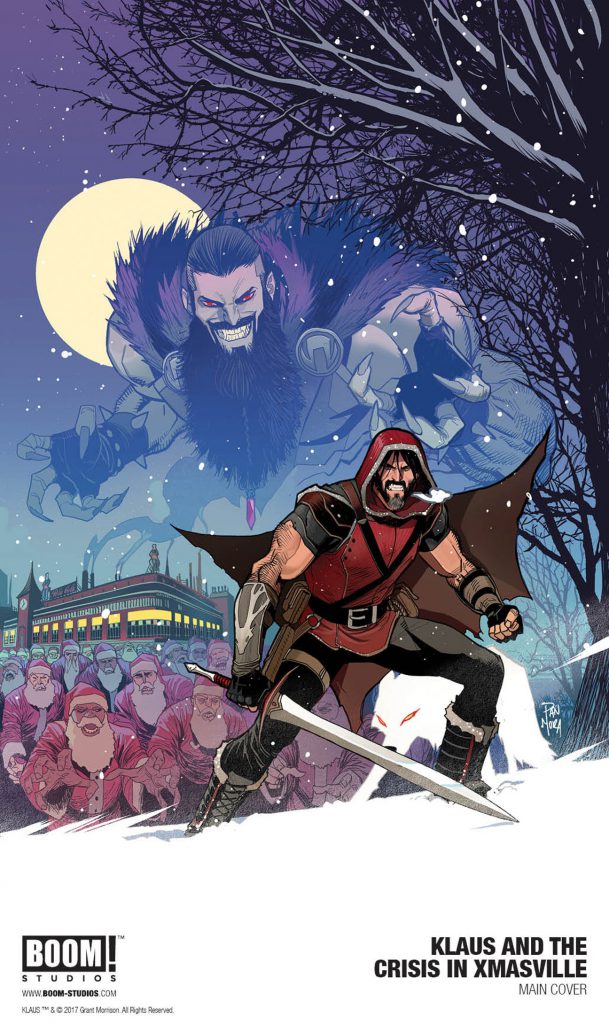 In the one-shots, Mora continues his fantastic art but unfortunately the story loses some of its magic. The Witch of Winter felt rushed and the connections were more tenuous, less fun. It’s not a terrible story and it’s still got some of the heart of the original series but it felt more contrived. Rather than a fun take on Klaus, there were parts of the conflict that were resolved in two panels and other parts that seemed more silly than fun. It might be a personal preference thing with this one-shot but I didn’t enjoy it nearly as much as the original. And The Crisis of X-Masville takes that lack of fun and spins it right on into crazytown. Managing to be both rushed and nonsensical, it was a slog that was the opposite end of the entertainment spectrum from the original series. While this isn’t exactly a series that takes itself real seriously, The Crisis of X-Masville takes it to a strange and ridiculous degree. I’m really hoping that the most recent one-shot, Klaus and the Crying Snowman, will turn around this trend in the series. The first issue in that series was released yesterday so with any luck, it will prove better than its predecessors.

If you’re in the mood for a fun Christmas story, Klaus is an easy recommendation. It’s a fun twist on old Saint Nick and the original mini-series has more heart and cheer than I expected. Rather than being completely over the top and ridiculous, it reminded me of why I enjoy Christmas and gave me an epic adventure with a man and his wolf. I’ll admit that I’m also partial to the faux-medieval dressing and bits of magic. Unfortunately the two one-shots that followed couldn’t keep up and are more properly endured than enjoyed. But here’s hoping that the series will return to its fun, adventurous roots with the most recent one-shot and bring us all an action packed Christmas read!