It has been awhile since I have been truly excited about a game expansion…who am I kidding? I get really excited about game expansions. But there is one I saw a spoiler for today that I am very excited about. The spoiler in fact made me so excited that I wanted to talk about the base game and how much I love it! If you couldn’t tell from the title, the game I am talking about is called Disney Villainous! It is, surprisingly, produced by Ravensburger games and showing up at big box stores like Target. 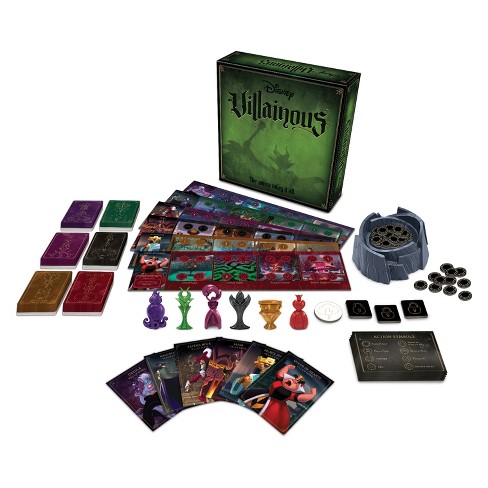 The cool coin bucket and the plastic markers really play into this games theme!

In Villainous players all take on the role of one of Disney’s famous villains, duh. They can choose from Ursula, Maleficent, Captain Hook, Jafar, Prince John, and The Queen Of Hearts. In order to win, each player must accomplish their own personal goal while the other players will be trying to halt their progress by causing heroes to muck up the works. Each player has their own unique deck of cards that will allow them to accomplish their goals. Each turn a player will choose a location in their realm board to occupy and perform the action on the board. Gain power (the game’s currency), play cards, defeat heroes, alter the fate of opponents by making them draw from their fate deck, or any number of other things the game may allow. All of these actions will allow you to get closer to your overall Evil scheme coming to fruition! 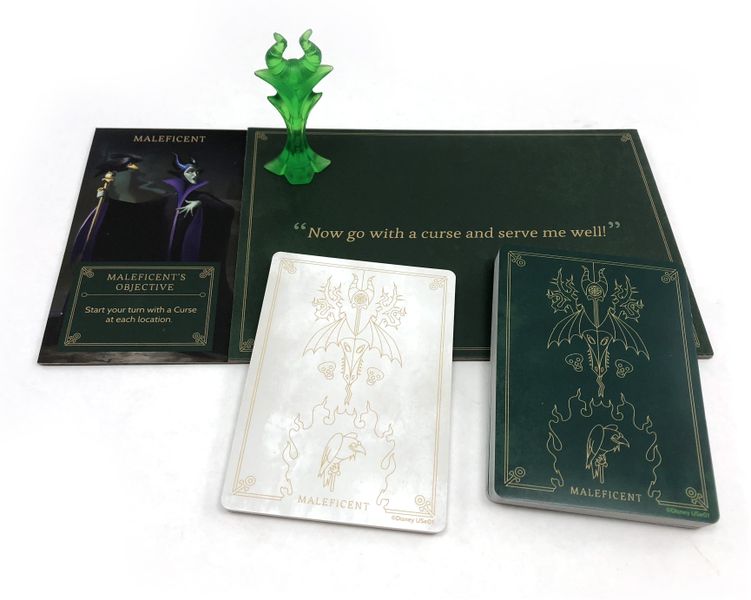 So right off the bat we get tons of replay value from asymmetric game play, as each villain has their own cards, goals, and fate deck that make the game different every time you play. Whether that be with a different number of people or as a different villain, there will always be fun to be had in this game. Also the game is very cutthroat, which is thematically appropriate. Villains would totally screw over other villains if given the chance. That being said some villains have WAY harder goals than others but it is really all about what you drawn and how the cards come up. It kind of feels (and I use this comparison as lightly as possible) like Munchkin, if it were to have a better rules set and dynamic and interesting game play. So I guess in the end the only thing it shares with Munchkin is the cutthroat nature but hey, I was never good at comparison! Once you play this game you will understand how awesome the capacity is for expansion and how awesome it would be to see all the villains available to play against each other.

That is precisely why I got so excited seeing the expansion spoilers for Disney Villainous: Wicked to the Core! We will get to play Hades, Dr. Faciler, and The Evil Queen! Three new villains to choose from, all with new decks, realm boards, and player pieces. One of the best parts is that if you don’t have the original game this expansion is Stand Alone! That is a fantastic way to build a game expansion. If you can get people to play your game from any inlet you have won! It is also good to see a game get an expansion so soon after release and I hope the cadence continues.

If you have not played Disney’s Villainous I would pick it up and give it a shot. It is easily available and super awesome. One of the only things I hate is the way they packaged it. They didn’t wrap it in plastic, they used stickers to lock the top and bottom of the box together. FAIL Ravensburger games, true fail. But hey, pobodies nerfict so check it out anyway!

What do you think of Villainous? Hate it or love it, let us know in the comments. Thanks for stopping by and I will see you next time.