So this week I would like to write something for the readers who are new to the gaming world! Today we will take a look at some common terms used in gaming.  This is the first of a few lists of gaming terms I want to do and today’s list is focusing on the jargon for different types of games as described by their mechanics.

The first two I want to brush over, on purpose,  are the categories Euro and Amerithrash. These two are the all-encompassing categories that a lot of people use to generalize games.  Euros being more of the bottom up mechanic to theme (or sometimes not even that), games like Agricola, and Amerithrash being the opposite, creating mechanics to accentuate the theme, like Eldritch Horror. 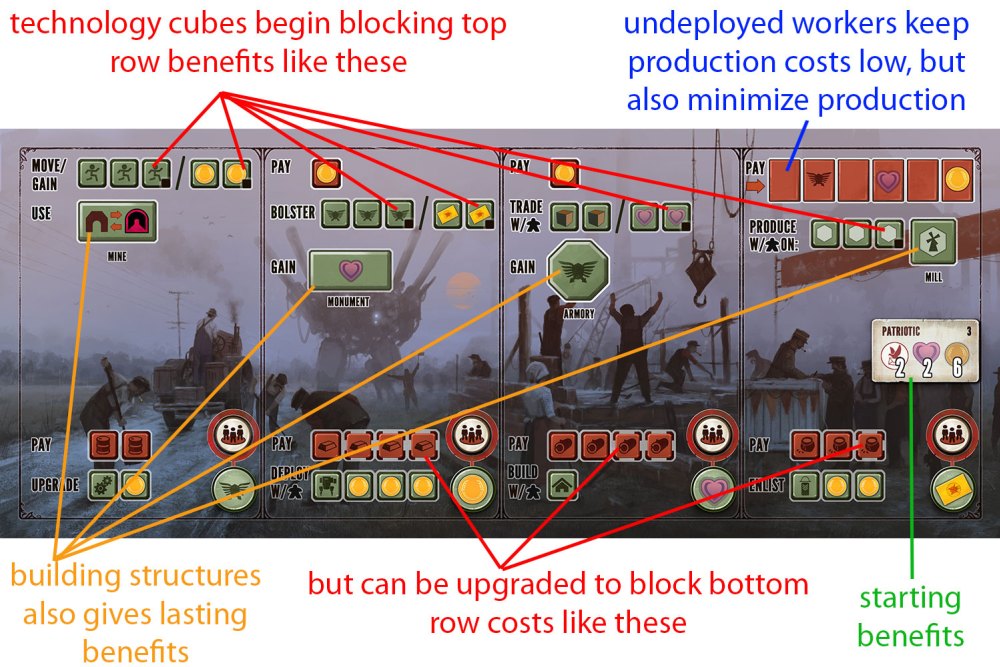 This is the Scythe player action board. Scythe’s action selection is the only part of the game. It makes the action so intense that you need a diagram to explain them! Source

Action selection games are games in which the players take turns selecting an action to perform or all choose actions to perform simultaneously. Usually these actions comprise the core mechanics of the game and all other mechanics revolve around or are a result of them. In the same vein are games where the players have a set amount of actions and if they use them they cannot use them again until a certain point in the game. A few examples of games in this category are most 4x games like Twilight Imperium, Race for the Galaxy, Scythe, Heroes Wanted, and Concordia. 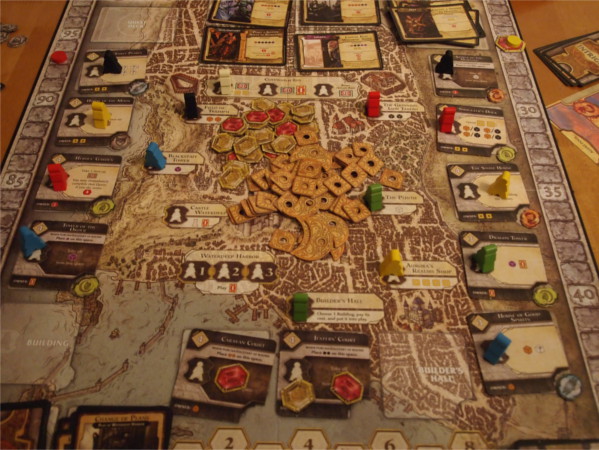 This is what a healthy Lord of Waterdeep board looks like at the end of the turn. The hustle and bustle of rainbow colored workers doing the bidding of their masters and making sure not to cross each other paths. Source

Worker placement games are sometimes also thrown into the same pool as Euros but I think the mechanic itself has garnered enough fun and awesome games to merit its own category. These games are similar to action selection but usually have more choices than the others listed above. Also these games typically inhibit two players from taking the same action whereas the action selection games do not. Some examples of these types of games are Caverna, Agricola, Lords of Waterdeep, and Alien Frontiers.

Not only do you need to work about collection sets of things based off their points but in Sushi Go you have to worry about what is the most cute choice as well. Source

Now by putting these two together I don’t mean to say these two mechanic based games are always together but usually drafting is the colloquial term for games in which victory conditions are based around collecting sets of things! In these games players take turns selecting cards, chits, or any number of things in order to collect and match sets for points at the end of the game. The drafting aspect is where you select these items from a secret pool of choices then pass the pool to the other players one at a time until no choices are left. Examples of games in this category are 7 Wonders, Sushi Go, Medieval Academy, and Seasons.

This is probably the category most people get their first exposure to due to the fact that these games are very light on rules and very good to play with groups. Social deduction typically involves each player getting a role and the other players trying to figure out who is who to make sure their team wins the game. Some examples of these kind of for games are Coup, Avalon, Werewolf, Shadows over Camelot and some parts of Battlestar Galactia.

This is what a healthy Kemet board looks like at the end of the turn. The hustle and bustle of rainbow colored soliders doing the bidding of their masters and making sure to battle each other…Wait this seems familiar. Source

Dudes on a Map

Also known as territory control games, this mechanic is all about numbers of figures representing power. Players focus on controlling territories with troops, vehicles, and whatever else they can muster up and fighting each other for control to win the game. These games typically involve the most frustration for people as they are the most directly confrontational games that people play. Examples of games like these are Kemet, Forbidden Stars, Risk, and Game of Thrones.

I know there are probably a few I missed but feel free to leave them in the comments. I want to do more of these lists so keep an eye out for the next one. Thanks for reading and I’ll see ya later!