I have a bimonthly table top RPG group. We have run through many different pen and paper RPG systems. From Dungeons &Dragons 4th edition to Warhammer 40,000: Dark Heresy, we have played and learned a lot. The main problem we run into is that table top RPG rule books are basically rule encyclopedias. This causes issues when you only have one or two books for 6 or 7 people to learn from. This requires the GM (and it.always should when you play these games) to have a vast and deep understanding of the rules. As much fun as it is to learn a brand new system, these 300+ page rule books are difficult to navigate and hard to quick reference to say the least. Secondarily, our group loves to play with miniatures. Both of these things together have lead me to think about utilizing campaign style board games as our next RPG and today I would like to discuss what I view as the pro’s and con’s of replacing pen and paper RPGs (PRPGs) with Campaign Style Boardgames (CSBs).

Yeah that kinda explains it all…

Both types of games have a propensity to cover a table but as far as utilizing table space, CSBs take the cake. With game tiles, minis, card decks and chits, CSBs have the tendency to take up multiple tables. A PRPG will need space for a board if you are using minis but typically it can be a 4′ x 4′ table. You will never see a game like Shadows of Brimstone able to be played on a card table. The board grows too much, the players need space for their player boards, and that is even before placing all the necessary card decks on the table. The cards on the table are stand-ins for lots of the things a GM would be creating during the game. Encounter cards, monster stats, effect reminder text, and weapons stats are all things you will find on the cards in CSBs, whereas PRPGs on the other hand…

Is Your Rule Book a Freaking Encyclopedia?!

If only core rule books were printed to look like an old Sumerian text of daemon summoning!

…have large books. Yeah that is all I was gonna say there. While you can store most of the stuff for a CSB in a box, the amount of books you need to utilize for a PRGP can be staggering. If you really like a system you may amass a whole library of 4th edition books before you know it (even though everyone hates that game…no I am not bitter). Along these lines I feel it is appropriate to also mention that a lot of PRPG Core Rules books have the WORST indexes you will ever find. By no means am I saying that all CSB rule books are better but I would much rather look through 15 pages to find how a single keyword works than 150. “But Kyle?” you ask, “How can you ever expect the player to be able to truly roleplay if the rules are not set out for every scenario?” “If I could scoff any louder you would hear it through the internet,” is my response.

“…And then I sprayed the children with a vine dog things from my mouth!”

One of the main concerns with the smaller rule set that is found in most CSB’s is players not getting to roleplay and while I said I scoff earlier, I do acknowledge it as a concern. However, my main argument here is that the players already are role playing in their heads. The cards utilized in CSBs to tell the story for the GM are not there to take away immersion, they are there to supplement it. Encounter-on-a-Card systems are literally already being utilized for random encounters in PRGPs at this very moment! To me just because an individual didn’t choose to directly put themselves in a situation doesn’t result in a need to break immersion to roleplay out of it. Games like Kingdom Death Monster have a fully fleshed-out town phase in between fighting horrible creatures. You can develop your village, build new town buildings, have kids, and do tons of other stuff. Despite the example of Kingdom Death Monster, the robustness of the rule set will probably be the most controversial aspect of replacing PRPGs with CSBs in most groups just because of the traditionalists who really, really like to have spreadsheet characters. People like what they like and change can be hard. So kick them out because of the comparison! 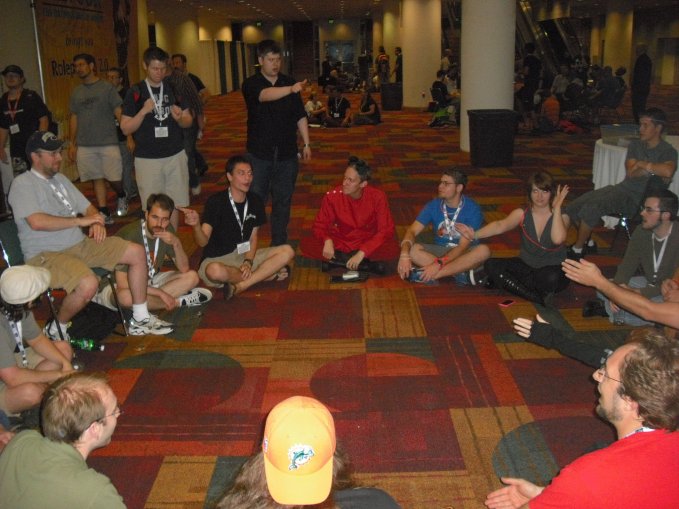 Of course Werewolf can handle 20+ people, they don’t even have a character sheet!

All jokes about kicking individuals out of the group aside, CSB always tend to have a smaller player count that any RPG can. I say “can” because I will never GM a group of 7 ever again in my life. For most PRGP groups 4-5 is the usual size so transitioning between a PRPG and a CSB isn’t hard. But our group typically has between 6-7 players including a GM. This can cause issues with the ability for everyone to play, and let’s be real, the main reason to play an RPG or a boardgame is to be around your friends. Some games provide (or have fan-created) rule sets for incorporating more players but balance can be a large issue when adding players to a game that was meant for fewer. Also there is the tried and true fact that more players means more down time between turns, which can kill interest. While richness of a rule set can be a hindrance in transitioning into a CSB, I think the player count issue is the true hurdle.

In essence a CSB is like an easier to learn RPG with a bunch of premade content in the box. I feel that, depending on your group, sometimes a CSB is a good change of pace and can give people who may want to sit out one story arc the ability to do so without seeming like a jerk (thank you low player counts). My ideas for my group so far are: Shadows over Brimstone, Imperial Assault, or Kingdom Death Monster. Any thoughts or suggestions of games I didn’t think of? Let me know in the comments. See ya next time!