To start off I know the picture is of the Emperor, but a corpse god sitting in a defamed throne is exactly what this deck aims to accomplish. Today I want to do my first deck review! I built a Warhammer 40,000 Conquest  deck using Smasha Gun Battery in Chaos and I really though it was fun. Although I played it for the first time in a multiplayer game, it ended up doing very well. The one problem it ran into was Chaplin Marvos and the unstoppable specialization. So without further blathering I give you… The idea was originally to try to utilize Calamity and Smasha Gun Battery to kill everything that was left on the board after Calamity by using Smasha Gun Battery during the next deploy phase. I spent a few days thinking about what cards would work well with the idea that I needed a few big units to survive the Calamity and be able to take damage. Also the idea that I could potentially first turn bloody someone’s warlord made me all the more excited. However I had to keep in mind that the card also does damage to me. So naturally I choose the one warlord that loves having damage on himself, Ku’gath! Ku’gath allows me to utilize the fact that my warlord at some point will have damage on him. If the deck is working correctly (as it did), most of my opponents’ units will be killed in the deploy phase via Smasha.

Another thing you will notice is that most of the units cost 3 or more. This should be pretty obvious as Calamity is a thing but also you will notice that most of them are Daemons. That is a bit trickier to explain. So the idea is that I need to be able to dump my hand so Smasha does not do to me what it is doing to my opponents. However the fact that most of my units need to be outside of Calamity means I will not have a very strong command game. As our meta figured out long ago, cultists allow Chaos to stay out of the resource game for the most part if you have the daemons to utilize their sack effect. I am resorted to calling this the cultists’ suite (a hold over from Netrunner terminology). It consists of the 3x Splinter Path Acolyte and 3x Promise of Glory in combination with a set of daemons that support what your deck play style is (usually for me this is 2x Possessed, 3x Soul Grinder, and 2x Vicious Bloodletter). This is a nicely supported by Throne of Vainglory in this deck especially since I have twenty-six 3+ cost cards. More cultists, more fodder for the Smasha as well if I am not getting my daemons! If yos ain’t as cunnin’ as de ovar Orks, the supports in this deck are where the name comes from ;). As far as some of the other units go I like the idea of a Virulent Plague Squad getting stronger every time my opponent has to kill their command units and it is also a target for Fetid Haze. The latter is also the logic for the Gleeful Plague Beast over the Vicious Bloodletter. Xavaes Split-Tongue is in there for for 2 command icons and more cultists. And lastly Heretic Inventor is in the mix because he is easy to play and has a huge butt. (3 hit points yo!). I do not care where he goes because he is a damage sink and if I Calamity him I get 3 more damage to put out on to a non-important unit with Smasha! 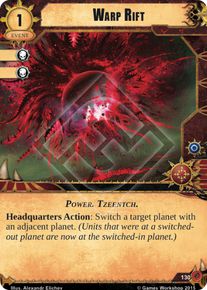 As far as attachments go, you can see that I included Slaanesh’s Temptation. This can be a huge tempo hit to my opponent and keep cards in their hand. Since I am usually playing the deck by letting my opponent get all the card draw planets and trying to limit their resources, this can be very painful. Also two shields! The events are a bit random to the casual observer. Calamity and Promise of Glory are there for reasons we have discussed but Warpstorm and Warp Rift, huh? Well Warpstorm is a  great event in Chaos and it keeps my 3+ cost count higher, so it is an auto-include in Throne decks.  Warp Rift is a new inclusion though. First off it has two shields, yusss. Secondly it gives us the ability to modify the planet set-up for a prolonged game. This deck may need that since a bad hand can hurt your ability to take out all of your opponent’s units, so I find that exceptionally helpful.

Generally I mill to a Smasha because it is the crux of how the deck functions. If I cannot get that out, Ku’gath can usually bully command units and Warp Rift should buy me some time to dig. I was debating putting Ammo Depot in but I didn’t think going to 52 cards was a good idea. If you think of anything feel free to put it in the comments. Thank for reading everyone, see ya next time, Living Card Guy out!