Today I would like to focus on one of my favorite topics in card games: Big Cards. The ones that you see and you think,”Holy wow! That is a lot of (insert game’s currency here).” Today I want to talk about a few and try to give some ways to use them in-game. Here goes nothing… 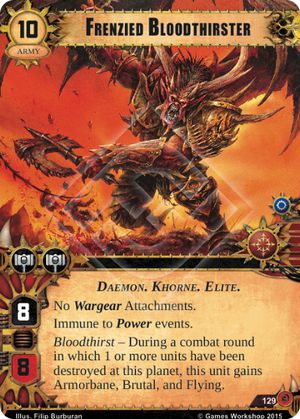 The Rub: This guy is a BEATSTICK. He gets a bunch of useful keywords during a combat, is immune to some of the most powerful events in the game, and has enough HP to survive the round to get the effects to kill a warlord in one shot, but he is expensive and only gets the effects during that round (One round of units exhausting for combat).

The Strategy: Use cultists (Promise of Glory and Splinter Path Acolyte) and Master Warpsmiths to make this guy super cheap. One of our local players has a deck that has gotten this guy out regularly. Use some event recursion like Colosseum Fighters, Succubus Warriors and Sslyth Mercenary for command, and Gut and Pillage and Archon’s Terror because they are just amazing. He is terrifying and you will have a hell of a time getting him off the field. Can also try to utilize Corrupted Teleportarium to toss him around the board.

The Rub: So I am kind of new to the Netrunner game and this may not be novel but I am thinking this guy could be awesome with The Professor on account of the programs you can put in.  If you can get a ton of cards in your grip this card could be bonkers on how many clicks it saves you.His limitation is that we need to stay in faction while trying to accomplish this.

The Strategy:  Here is the idea: Motivation + Eureka. As a back up, run Freelance Coding Contracts and Modded which will help us as well, with Levi AR Lab Access to get the programs back. We could also slow roll it with Personal Workshop if we really want to be dirty about it. I think this deck should also run some cards like Public Sympathy and Beach Party to really take advantage of Monolith’s abilities. We also have Diesel and Quality Time in faction to keep our hand strong when the time comes. We could throw a Tyson Observatory in there if we really wanted to but that and the programs are all up to you folks. 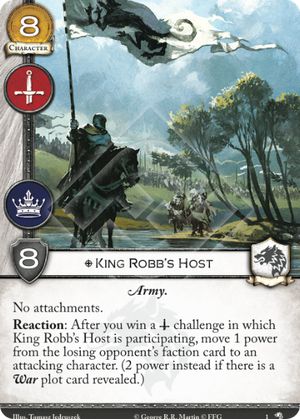 The Rub: Oh look a big expensive Stark card. This is not something that is foreign to players of 2nd edition for the Wardens of the North, but this guy has a very powerful swing effect that can really save your ass if you are in trouble and are playing War plots.

The Strategy:  I am thinking we play a pretty normal Stark Fealty deck due to the fact that the card is loyal and try to utilize high gold plots like Trading With the Pentoshi, Fallen from Grace (since sacrifice helps Stark a lot already) and Calling the Banners. Then we run three war plots for the turns when we want to capitalize on the ability. The three being Heads on Spikes, and two Marching Orders. Then for balance we toss in a Wardens of the North. That should help us get this beast out and then we can really make a turn go crazy with a Winter is Coming.

I hope this gave you all some ideas on how to think around bigger cost cards in LCG’s. Let me know if i missed anything or if you play another LCG that you have a big card you have built a deck around! Living Card Guy out!