Skip to content
Home » The LCG: New Life for Nertunner

Android Netrunner has been falling by the wayside for me due to my mostly bad experiences at worlds last year playing the game. At the time, the game was in a spot where only a few decks were competitive. I will stop the train right here and say that was almost two cycles ago and the game is in a different spot. But you still see the same old Id’s being used because of their efficiency. That is not a point of debate as most people who want consistency and to gain competitive advantage have no real choice but to play Kate and Account Siphon or Engineering the Future (ETF) and Astroscript. However, FFG just recently shook things up by not only announcing the cards for the newly implemented rotation but they are also revising the core set and removing some cards that were causing stagnation. Below is a list of cards no longer playable due to the new core set rules.

Yes, I will let that sink in for a second. But not all is lost as the new core set did also pull some previously abandoned cards from the first two cycles back in with the revised core set. So take that for what you will as I want to talk a bit about why rotation is good and why I am excited about it in Netrunner.

Rotation is a great way to keep things fresh. A lot of other card games use rotation to keep their most popular formats interesting. Netrunner has had the same cards for a LONG time relative to some of its other card game counterparts like MTG. Netrunner has had the same cards since it’s rebirth (see what I did there) in 2012, which is a very long time and has created a huge card pool. These both have created multiple barriers to entry surrounding getting all the necessary cards to play and a bit of a feeling of betrayal when their hombre decks keep losing to NBN all the time. While the Most Wanted List, Eratta, and even a new core set are barriers to entry as well, they are different, more acceptable forms. Someone may end up buying an old non-legal core set, but a good FLGS and community can stop that from happening and educate around errata and a restricted list of cards. It is a bit harder for a store or a community to support a huge card pool or stagnation. I think these changes are great and the cards that are now out due to rotation make deck building interesting again. 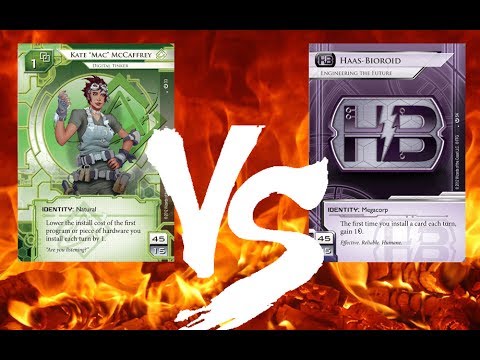 This is probably one of the most common youtube event coverage thumbnails! Source

With the removal of cards like I mentioned earlier (Kate, Account Siphon, ETF and Asctoscript) we gain new options or previously unplayable cards. We can see the potential for things like Xanadu, Whirlpool, and Stronger Together to see more play or use in more decks. Perhaps even Burke Bugs may see some play… just kidding. I just like the idea of the new and I am very excited for Netrunner to be updated with rotation rules so I can start building again!

If you were nervous about rotation I really hope you can now see why it could be a good thing. If you noticed something I missed or see more potential for new cards that you wanna build with let me know in the comments. Living Card Guy out!