Skip to content
Home » The Hyperlane Report: My Obsession with Rebel Trooper

My Obsession with Rebel Trooper

For the last few articles I seem to really be enamored with feature images of Rebel Troopers. They seem to be as close to expendable in the movie as Stormtroopers, so we see lots of them. In that same light I guess that is kind of why they are the iconic rebel solider. So I figured I would do a Rebel Trooper article, and of course a deck build! Short intro but let’s get into it! 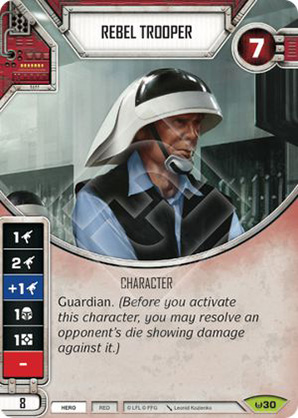 Rebel trooper is actually a pretty solid non-unique card. Three damage sides, a shield and a resource mean it is on par with a lot of the standard villain non-uniques, like First Order Stormtrooper and TIE Pilot. The guardian keyword is interesting on him and that is what I based the build around. Guardian is nice because it has the potential to keep a character alive that has a powerful effect or great die sides. So I have two builds I want to share today based around protecting a powerful character. 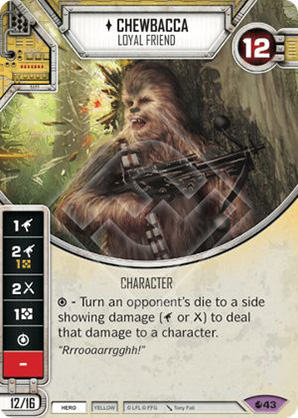 This deck is based around protecting Chewie so he can use his ability without needing to worry about dying. We have Second Chance which is nice to see on Chewie, but also can be moved to the trooper with the Battlefield. If you couldn’t tell, the battlefield is really all about moving good upgrades around so they can be heavily utilized by other characters. Also we have tons of damage output from the upgrades we play, so while we’re absorbing damage we can output some as well! Jetpack and Overkill add a lot of ranged damage alongside our characters and Bowcasters. Hoping to also use Redeploy to great effect here due to the Troopers dying. The events are mostly based around removal and control, to make sure my opponent doesn’t have too much they can do on their turn.

Big Worries: Getting my upgrades discarded with my own battle or not getting it. Also there is no way to activate a trooper directly after you use his special side, so that is dangerous as well.

For Queen and Country 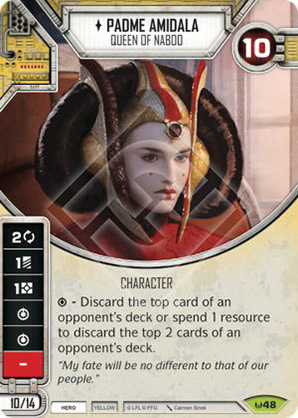 This deck is quite a bit different than the previous one with similar colors, which is a pretty cool aspect of this game. It is a bit low on health, but I think it can run pretty fast and Lone Operatives should help. The main idea is to get money and activating special sides. One kind of cool combo revolves around special siding Lone Opp a turn after Guardian triggers. Double Dealing and Outmaneuver are all-money in this deck. Specifically Outmaneuver as it means I can always have the resource for Padme’s ability. Thermal can trigger Rebel for other Thermals and Cheat is also a thing. “Fair” Trade and Logistics are for money events before your supports show up.

Close Cuts: Imperial Armory and fast hands for speed but I dunno if either fits.

Big Worries: Not getting a support out soon enough to start getting value and not having enough event-based control.

I really think Rebel Troopers have the potential to be annoying. I also really think there is room for Wingman or Squad tactics in either deck to Double Down on Guardian activation in one action. I’d looked at blue characters, but all of them are a bit too expensive for two rebel troopers, so I didn’t make one. I very much think either deck will be fun and each would play pretty differently. To all the gunned down, exploded, crushed, and otherwise killed Rebel Troopers in the movies, this article is for you. Time to jump…