Sounds like a really cool video game right? It is, in fact, the new Star Wars Destiny Expansion called Legacies. The box is all white to let people know it is part of a new or different series than the first three and we will be getting two new starters as well! Today I want to focus on the Starters from the new set.

One of my favorite parts about this game is the ability for FFG to reprint the same character more than once because it allows for us to feel the theme through the cards. Our heroes are pretty legit. If we have money for it we can get an extra value from Luke’s sides once a turn using his power action, a once a turn action on new units in this set. Han lets us get a free reroll on ANY die when he activates. so running him with red to get Feint could be a thing. While not a super efficient way to reroll, we still get it once a turn which isn’t too shabby. Both have pretty decent sides otherwise, giving resources and damage. Most importantly they are both 11/14 which means finally eHan and eChewie is totally a thing! 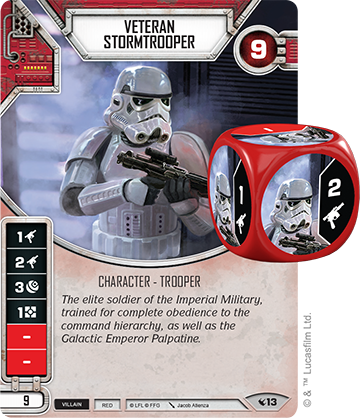 I also feel like it is awesome that we see what I would refer to as leveled up versions of other characters. In a very morbid way, Boba is also a “leveled” up version of Jango, he has better sides than his father and his special is very useful against heavy hitting targets like Vader and Cad. The veteran Stormtrooper is also a great example of that we can see that for 2 more points we get 2 more health, three pure damage sides and a resource side for that delicious Bait and Switch to a 3 indirect damage side, which brings me to another new thing from this set, Indirect damage.

Indirect damage is a new side of the dice we are getting in Legacies. when resolved, it forces a player to deal that value of the die to their characters as they choose. They cannot deal more damage to a character than it has a life though. I think this card makes things like Vader’s Tie and Bossk a bit better than they are currently. Also as quoted by FFG:

When you deal indirect damage to an opponent, they choose how that damage is dispersed among their characters. Indirect Damage is powerful but unfocused—sometimes great effects can even see you dealing indirect damage to yourself.

So dealing your own units damage could be a very important thing in the future. I am not going to focus too much on that today as I want to speculate more on the sweet dice we also see in the starter boxes.  In the Heroes set we see a new blue R2-D2 die and a different looking Millennium Falcon die. Most likely they are more supports, but I am very excited to see what sides they have. In the Villains set, we see a very familiar looking Slave One die which makes me wonder if they are putting legendaries in the Starter boxes. Probably not, but then what does it all mean?!?!?!

This new set already looks exciting and new starters mean we can potentially have more custom limited play styles work out. How do you feel about the new starters? Is it too soon after the Empire at War release to care about new stuff or are you as excited as me? Let me know in the comments. Time to Jump!