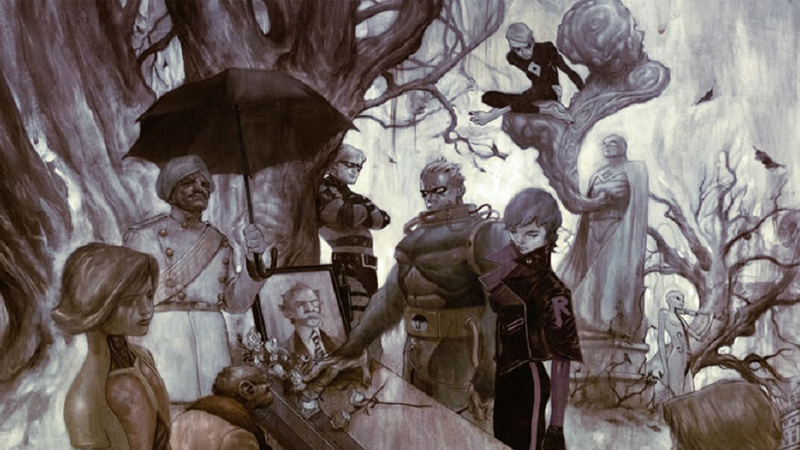 In the last few years, it seems like we’ve been seeing more and more comic book adaptations end up on the silver screen or the slightly smaller screen of streaming services like Netflix, Hulu and Amazon Prime. While not every single one is an instant success, it’s a great way to expand consumption of series that might otherwise remain unknown to a larger audience. The Umbrella Academy is an odd little series that got a lot of attention when it came out back in 2008 (when it won an Eisner Award for Best Limited Series) but it’s never really gotten a lot of name recognition outside of the world of indie comics. I’ve been reading comics for quite a few years now and even though I’d heard that it was good, it was one of the ones I had never managed to get around to reading. Once Netflix announced its adaptation though, I knew I had to finally see what the source material was all about. So this week I’ll be talking about the first two volumes of Umbrella Academy, though there is a third volume which is due out in July of this year.

Umbrella Academy is the story of a strange, dysfunctional superhero family which generally does it’s best to save the world. Even when it’s mostly themselves that they need to save the world from. In the first volume of the series, Apocalypse Suite, introduces the seven children of the Umbrella Academy. The brainchild of eccentric inventor Reginald Hargreeves, the Umbrella Academy is the training grounds for the children, who were all adopted by Hargreeves after their mothers gave birth to them under very strange circumstances. Each of the children except one has a special talent and while Hargreeves is far from an excellent father figure, he does train them to use their abilities. He does not however train them to be functional people and after he dies years after the team has disbanded and gone their separate ways, it forces the dysfunctional family back together again. Just in time to have to save the world again! The second volume of the story, Dallas, picks up where Apocalypse Suite left off and continues the mad, violent adventures of the Umbrella Academy. None of them will quite ever be the same again. 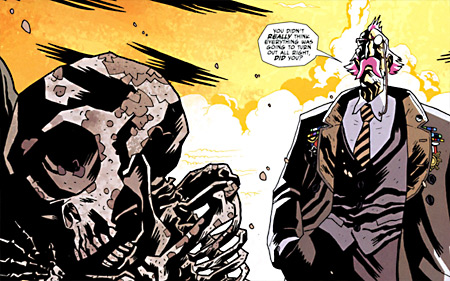 After reading the Umbrella Academy, I’m intensely curious to know which direction the adaptation will take with it. The series is frankly a bit of an odd duck. Written by Gerard Way (lead vocalist and co-founder of the band My Chemical Romance), the series is every bit as bizarre as you might expect. In the first volume, that’s a bonus. It’s quirky and strange and darkly humorous in a way that surprised and delighted me. The family members of the Umbrella Academy were strange and awkward as children but growing up with a group like that for your relatives was bound to make adulthood even worse. They constantly snarl and bite at each other with rather snarky dialogue and a level of angst more appropriate to teenagers than adults. The result is a family that’s a complete trainwreck but one that’s impossible to look away from. It also has sudden bursts of mayhem that take you by surprise after all of the family drama and it sets a pretty quick pace, particularly towards the end of the first volume, that made it easy to stay hooked on the story. Unfortunately, the second volume incorporates a fair amount of time traveling and plots within plots that make it kind of obnoxious to follow. It loses some of the quirky charm of the original for a story that doesn’t feel completely fleshed out. The one consistent piece of Umbrella Academy is the fantastic art of Gabriel Bá. I wasn’t overly familiar with Bá’s style since I haven’t read some of his more iconic comics (Daytripper and Two Brothers being the most well known), but I loved how his cartoony style managed to be both elegant and violent at the same time, a lovely fit for the quirky writing of Way. It helps to set the strange tone of the series in a way that seems distinct to Bá and it’s hard to imagine anyone else in that role.

The Umbrella Academy isn’t necessarily a series that I would recommend to anyone and I think that’s part of why you don’t see it on more “must-read comics” lists. It’s strange and dark and delightful in a way that won’t appeal to everyone. It incorporates a dysfunctional superhero team, mysterious supervillains, an awful father figure and time travel into an odd, fun and funny adventure. It’s unfortunate that the second volume doesn’t quite live up to the standards set by the first but I am very curious to see how Netflix deals with that. Have you seen the new adaptation or fall in love with the comic book series? Let me know what you think in the comments!