Comics and The People That Make Them!

Last year (my first year at Denver Comic Con), I was so amazed and overwhelmed at the experience that I ended up only getting to see a few panels. This year, Pop Culture Classroom offered so many great panels on comics that it was truly a struggle to decide which ones I could attend and how many I could cram in over the course of the day. Without further ado, here’s what I was able to see:

Cover Artists – Can They Critique Themselves (Part II) Since I enjoyed the previous round of Cover Artists – Can They Critique Themselves so much, it was pretty much a given that I’d attend round 2. This time, the panelists were Jamal Campbell, Brandon Peterson and Matteo Scalera, with Matt Strackbein back as moderator. Gabriel Hardman was listed to be on the panel but unfortunately wasn’t able to make it. Just like yesterday, Strackbein had chosen a cover for each of the artists that he considered to be some of their best work and, according to him, absolutely perfect. When some of the panelists were a little nervous about such high praise, he challenged them to find something they didn’t like about the piece that he chose. 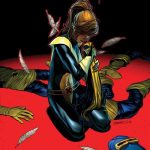 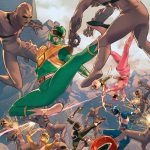 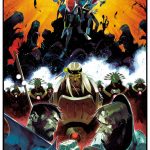 The great thing about this panel is the connection with and understanding of cover artists that it gives viewers. For many of us, covers are what gets us to buy issues or graphic novels but we don’t necessarily know much about how these covers are chosen and the amount of thought that both editor and artist put into the process of making them. With each of the artists that appeared on the panel today, we got some pretty awesome behind the scenes stories about the art. Brandon Peterson talked about how the cover that Strackbein picked actually had had another feature that had to be removed because it made it look like the central character (Kitty Pryde) had had an “accident” instead of just kneeling on the puddle that was now Iceman. Peterson remarked on how he was so focused on the way that he could use that puddle to create a reflection that he didn’t even think about how weird the placement of the puddle looked. Jamal Campbell’s story was about how much he loved Power Rangers as a kid and how his love of the action scenes inspired him to make his cover as if watching Power Rangers through the eyes of a five year old. And Matteo Scalera gave us insight into the brilliantly collaborative nature of co-creating a series like Black Science with Rick Remender and the ups and downs of working with someone else that closely. Not to mention a little bit of gossip!

While it’s great to have someone who is both a fan and a leader of Pop Culture Classroom as the moderator, this panel felt a bit more like a private conversation between Strackbein and the artists. While it was still a great experience, only a few minutes were left for audience questions at the end so the audience didn’t get to participate as much in this round. It would have been better if the panel could have been made longer or if time had been budgeted more to allow for more audience participation. Truly my only gripe about what I think is my favorite series of panels that DCC has offered so far.

Cover Artists – Can They Critique Themselves has been truly an eye opening, educational and immensely entertaining series of panels that I will be eternally grateful to PCC for offering at DCC this year. It introduced me to a few artists that I wasn’t previously aware of and allowed me to learn more about artists who were already among my favorites. In future years of the con, I very much hope that this panel, and others of its type, are continued and expanded upon.

Marvel Comics – Then And Now To be honest, I wasn’t entirely sure I wanted to go to this panel. The longer I read comics, the less interested I am in the Big Two comics publishers: Marvel and DC. But, without them, the comics industry wouldn’t be what it is today. And I mostly have lost interest because I just can’t keep up with the amount of material that they put out. The intent of this panel was to put a diverse group of Marvel creators, two of whom had been around since Stan Lee was young and two “newer” talents (both of the later two have still been with Marvel for several decades) and have them talk about the changes that Marvel has undergone. The two veterans were Allen Bellman and Vic Carrabotta and the two current artists were Alitha Martinez and Mike McKone. Allen Bellman started out illustrating backgrounds in Captain America in 1942 and has had a long, illustrious career with Marvel. Vic Carrabotta did a lot of work for Marvel’s 1950’s forerunner Timely Comics and was involved with Marvel during the congressional investigations spurred by Dr. Werthem in the fifties. Alitha Martinez has been working for Marvel since the 90’s and is most well known for her work on Black Panther: The World of Wakanda and Batgirl. Mike McKone is an English artist (whose work was featured in the first Cover Artists self-critique panel) and has worked on several Justice League titles for DC as well as rendering covers for Marvel recently. It was an interesting mix of talent between new and old, American and international.

Unfortunately, with such a diverse blend of experience, this panel needed a much stronger moderator than Matt Wisniewski was able to provide. I mean no disrespect to Matt, who runs a geek-related YouTube channel and seems like a very decent dude. The trouble is that both Allen Bellmen and Vic Carrabotta had trouble following along with some of the questions and wanted to talk about the Stan Lee era. While we all loved hearing about it, there was an unfortunate tendency to start talking about the current political climate, on which the panelists were certainly not in agreement. When you go in expecting to hear about Marvel, having the panelists start arguing about Trump was not really ideal. I think Matt was a bit too much in awe of the panelists to really step in like the room needed and the panelists ended up cutting off the conversation themselves.

Despite the atmosphere of the room getting a bit tense and awkward when politics came up, it was still interesting to have the perspective of the veterans, who clearly believed that technology had interfered with the ways that artists, writers and editors collaborated, and Alitha and Mike who both seemed to feel that the technology had increased their ability to work on comics. Hearing some of the stories about Stan Lee was also neat for someone who is a relative newcomer to the industry and wasn’t familiar with some of that history. All in all, it was still an interesting panel.

DC Comics – Then And Now

Taking place immediately after the Marvel Comics – Then and Now panel, the DC Comics panel was moderated by Ryan Frost and the panelists were Aaron Kuder, Tom Raney and Chad Hardin. This panel had a much more relaxed, congenial atmosphere and it was clear right away that these guys knew and were comfortable with each other. Aaron Kuder is well known for his work on Green Lantern: New Guardians and Superman (Action Comics), Tom Raney made his name with several X-Men series as well as Outsiders with DC, and Chad Hardin has worked on a number of different series for DC but is perhaps most well known for having been the artist for the Harley Quinn series for the past eight years.

This panel had the same pitfall of reticent moderator that the Marvel Comics panel dealt with but fortunately the artists were very much capable of handling it on their own. Since the floor was almost immediately opened to audience questions, all three artists ended up talking about what it was like working for DC comics, the timeline they usually had available once they were given a job to work on, the amount of collaboration they had had (and what they preferred to have) with the writers and editors and the ways in which to learn to become a good artist in the comics industry. The personalities of the three seemed to mesh really well and they struck a good balance of humorous and helpful that made the panel very entertaining to watch and learn from.

Those were my choices of the comics panel offerings for Day 2! Hope you enjoyed hearing about them and let me know if you had thoughts on these panels or any others! Tomorrow I will be attending a few panels on the different styles that artists bring to the table when illustrating comics and am looking forward to reporting back tomorrow night!