If you have never read any of my articles, you may not know my previous feelings on Games Workshop. So let me tell you right now:

So if it is not clear, I didn’t really like them much. Emphasis on didn’t. Recently I have come to see some of their decisions and products in a new light and I would like to take some time today to discuss why I have changed my opinion on their company and products. New packaging is not the only thing they did, but it sure does look a lot better!

First of all, they started repacking and repricing their starter kits to allow more people to get into the games. What was once an army set is a now a starter collecting kit at a lower price! They also started developing board games that get you their sweet models. In the last year or so we have seen games like Warhammer Quest: The Silver Tower, Lost Patrol, and Gorechosen. These are all pretty decent games that use a separate rule set than the Warhammer 40k and Age of Sigmar rules, so there is no need to buy anything but the box they come in. But if you do wanna use those models in their appropriate game universes, there are rule sets for them online. 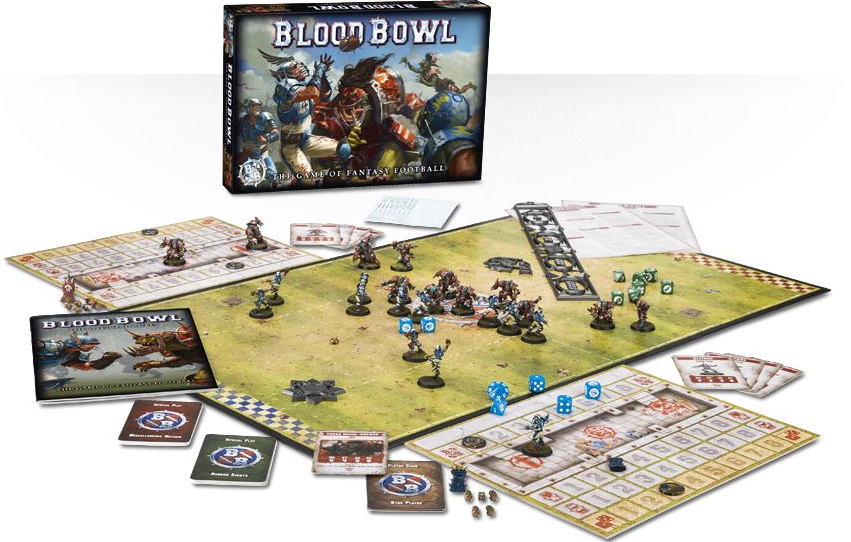 In an unprecedented move, GW released a product with all the things you need to play in one box!! Jk, they have done that before, but this is still awesome.

GW isn’t just repricing things, they are also revving some of their most popular franchises. Bloodbowl, Necromunda, and Warhammer Quest are a few. These games were immensely popular, but losing official support from GW for one reason or another. Recently GW has been releasing new rule sets and starter boxes for these games due mostly to popular demand. Bloodbowl is a very popular game that draws people in from all over the gaming community. Warhammer Quest was one of the most popular dungeon crawling games as it pulls from Hero quest’s rule set and set it in the Warhammer universe! All fans have left to wait for is a remake of Battlefleet Gothic, GW’s fleet spaceship battle game. All of these re-releases have new sculpts and new components, which makes them look better than ever. Some people still kind of view this as a money grab, but in reality it truly seems different. What I mean is that if they base a game in their fantasy universe, such as Warhammer Quest, those models can be used in most of their other games’ sets in that universe, mainly the Age of Sigmar table top strategy game. This means all the non-flagship games’ models pull double duty with free online rules for the other games they can be used in.

Cards and Minis together?!? HERESY!!

Finally, I am very impressed with one game in particular, Warhammer: Underworld Shadespire. This game is a small squad tactical minis/ card game set in GW’s fantasy universe. It is fantastic, fast-paced, and very fun. The main reason this game stands out to me (besides me really enjoying it) is it sets new precedent for GW. It shows they can commit to and support a game with a low price point. It only costs $60 for a core set and $30 for expansions which include a full new team and new cards. This is way cheaper than most GW price points for entry even at their new prices. It also shows they can support a game with a way faster play time than their flagship games. By this I mean they have balanced the game fairly well and they also provide organized play and Store Championship support. This is a very rare thing but fits well and shows a lot of Promise for GW. Finally, we also have the ability to use any models in this game in Age of Sigmar if we end up not liking how the game grows. Fantastic!

I used to be in a very strange spot with Games Workshop. From them cutting ties with FFG, to their business practices seeming shady at best, I was not very happy with them as an entity in the gaming community. Suffice it to say that has changed and I am now buying fully into some of their games and proud to say so. Maybe I am finicky or maybe I am just a bandwagoner, but I feel far more comfortable supporting a company that takes some chances with their IP by creating new games. Further more, I like the idea that they are using games like Shadespire and the upcoming Bloodbowl Blitz to get people who are not usually into minis games due to cost and complexity at entry point. These games are light versions of their other games and easy for non-heavy gamers to get into without fear of over commitment. Good on you GW! How do you all feel about Games Workshop? Have they been improving in your mind or were they fine to begin with? Let us know in the comments and I’ll see ya next time!

One thought on “Boxed Culture: Approaching a New Age with Games Workshop”