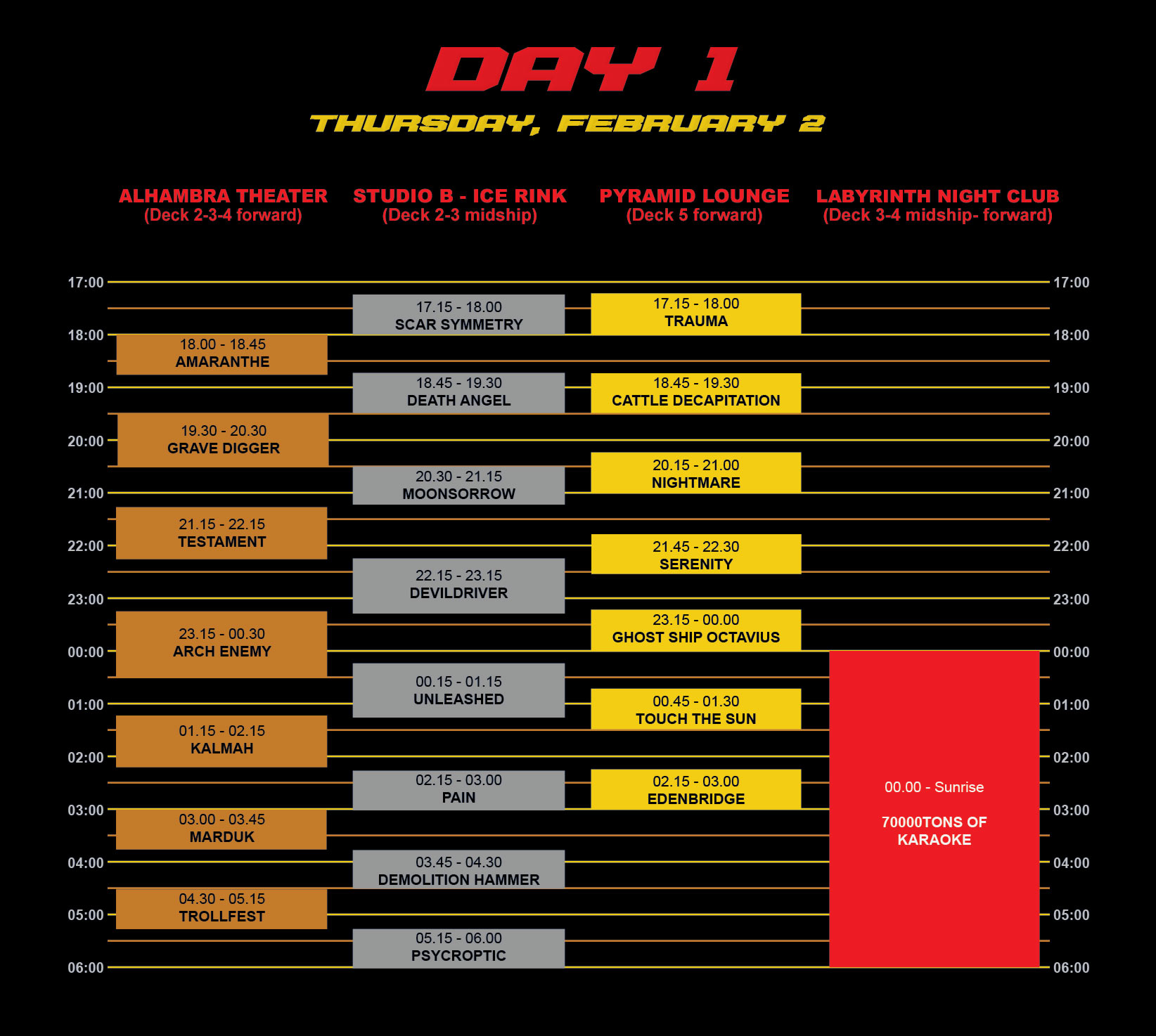 Scar Symmetry is a band that I saw in 2010 and wasn’t super impressed with.  I don’t know if it was me or just the timing of the performance but I didn’t really consider them again until a couple years when I learned that Christian Alvestam used to sing for them.  “Holographic Universe” is a fucking masterpiece and will pretty much forever remain untouched.  Listening to the albums since his departure are not quite as satisfying but I do really enjoy their songwriting still and this performance was very good.  My only gripe was that the clean vocalist’s microphone didn’t seem well checked.  I still had a great time listening to them perform and I was bummed that their second set conflicted with another band I wanted to see.

AMARANTHE (SWEDEN) FROM THE THEATER

I was curious about this band because of their poppy nature.  I knew many people who actively avoided them and many who attended their sets from sheer curiosity and also because they legitimately found their sound to be something they really liked.  I had a decent time watching them perform.  I was happy to see “Drop Dead Cynical” as well as a few of their other more famous songs.  I did not catch their second set, but I was content with seeing this one.

I had never seen Cattle Decapitation before and I was super stoked to check them out.  Unfortunately, Travis, the singer, was unable to be on the ship because of a family emergency so Riley from Allegaeon filled in for some of their songs.  Additionally, they had people from the crowd come up to do the songs that Riley was more unfamiliar with.  The lounge was super packed and the crowd was loving it.  I had a great time watching this performance and I was almost bummed I couldn’t see their second set.

MOONSORROW (FINLAND) FROM THE STUDIO


I wasn’t entirely familiar with Moonsorrow prior to this trip but I knew enough to know that I would like to see their set.  This was the only set of theirs that I saw but I am happy to say that it was a pleasurable experience for me.

SERENITY (AUSTRIA) FROM THE LOUNGE

Serenity is another band that I wasn’t super familiar with.  Less so than with Moonsorrow, because they didn’t even trigger a memory of their name when I heard their announcement.  Their performance was pretty good, if you’re into this sort of thing.  The male/female dynamic with the symphonic and power metal elements can be a bit much for some fans but I found that they did a good job live.

As stated in my preview posts, I gave Devildriver another chance and I decided to see them perform one set.  It was not awful.  This cover of AWOL Nation was particularly amusing but also not terrible.  I did not come see their second set but I did see a moment of it on the way to get food and it seemed like the crowd was digging it.

I had never heard of this band before they were announced but I was excited to find that Van Williams (formerly of Nevermore) was drumming for them as well as members from Warrel Dane’s solo project.  This was really fun to see and I think they did a spectacular job and really made a mark on the cruise.

ARCH ENEMY (SWEDEN) FROM THE THEATER

I saw Arch enemy two years ago on the cruise but grew a stronger appreciation for them over the last two years, especially after listening to the “War Eternal” album that was released in 2014.  Jeff Loomis, as always, absolutely killed it on the guitar.  He and Michael Amott have this chemistry that is unparalleled between guitarists.  The kind that you would expect to have developed over years and years of playing together.  they have this mutual respect that is exciting to watch.  They played classic songs like “Revolution Begins” and “Ravenous” but also played new songs like “War Eternal” and “As the Pages Burn”.  I did see their second set later and though it mostly the same songs, it was still really cool to experience them on the pool deck again.

UNLEASHED (SWEDEN) FROM THE STUDIO

Unleashed was great to see live.  I’ve been a fan for about 14 years and this was a bucket list band for sure.  I don’t know their discography super well but I did appreciate what they played.  From what I understand, their second set on the pool deck was even better, but I was watching the All-Star Jam at that time.

KALMAH (FINLAND) FROM THE THEATER
Kalmah was a band that I was pretty stoked for despite not being as familiar with them as I would like to be.  Unfortunately, the sound of the theater was not doing so well for them and their performance wasn’t as great as it could have been.  I wanted to see their second set from the pool deck later on but I was unable to due to time constraints.

PAIN (SWEDEN) FROM THE STUDIO

With Pain’s announcement, I was REALLY hoping for a Hypocrisy announcement.  Despite not receiving one, I was still beyond excited to see them.  Out of all of the bands announced, I think this is the band that I was the most familiar with as far as their material goes.  They played “End of the Line”, “Call Me”, and “Shut Your Mouth”.  The latter being an anthem-like song for the crowd.  Peter was much heavier in his delivery and his showmanship was pretty incredible.  I had a great time watching them and I made sure I saw them again in the Theater on Sunday.At the end of the show, the guitarist jumped into the crowd off of 12 feet of speakers.  It was awesome.