A long time ago a friend and I were discussing B.F. Skinner and how his theories apply to some of our favorite games. Skinner developed the psychological theory of operant conditioning. The idea was that classical conditioning was not complex enough to describe human behavior. How does any of this apply to games you ask? Well that is what I am going to talk to you about today, but first we need to define some terminology. Brown rat being trained by Physcologist Dr. B. Frederic Skinner, to press the lever and be rewarded with food. (Photo by Nina Leen//Time Life Pictures/Getty Images)

Operant conditioning revolves around the ideas of reinforcement and punishment. Reinforcement is the promotion of behavior via a stimulus. If you read this article, I will give you a high five! Now you will always want to read my articles and I have reinforced that behavior. The opposing idea is called punishment. If you read this article, I will call your boss and tell him that you have been reading articles online instead of working. Now you would not really want to read my articles and I have diminished or stopped the behavior. It gets a bit more complex when we realize there are positive and negative reinforcements. The example of reinforcement above is positive reinforcement. An example of negative reinforcement is if you don’t read these articles, you will have to buy me lunch. Now I am still promoting the same behavior but only by making it less appealing to do the opposite of it. There is a fine and kind of wobbly line separating negative reinforcement and punishment. Typically the thing to keep in mind with punishment is that the event is “adversive” meaning that it is not something people want to happen, like getting in trouble with your boss. 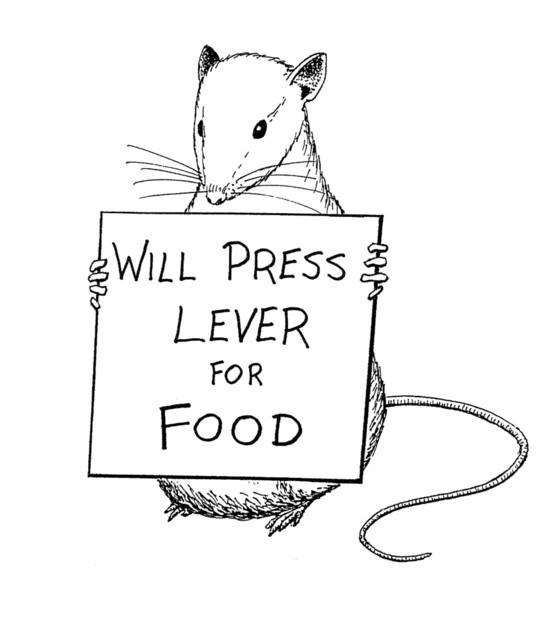 So many packs with so little reward… Source

CCGs have a propensity to replicate a Variable Ratio Reinforcement schedule. You buy a booster pack and you never know if you will get a needed card or a money card. This is great for companies who want you to buy booster packs or casinos who want you to keep gambling till you owe them your first born. In a CCG you also have the choice to buy singles. However, there is a negative reinforcement associated with buying singles, as in you have to give up something (money) to get what you want (the card you need to make a deck work). This tends to be viewed as continuous reinforcement, which does not take much energy but requires lots of reinforcement to function. In short, the enjoyment of playing the game makes buying expensive singles worth it. If you stop playing, then you are less likely to want to spend money to buy the cards. Knowing what you are getting is a good way to have reasonable expectations! Source

LCGs more similarly replicate a Fixed Interval Reinforcement. There are regularly released expansions that you can expect to come out at a certain time. This means you need to spend a moderate amount of energy doing the certain behavior and it requires a moderate amount of reinforcement to reinforce. You need to remember when the cards are coming out to get new ones and since there is no gambling to getting what you want, you are able to play the game less to reinforce your behavior of enjoying cards. Lately, however, LCG suffer from more variable term reinforcement. This is due to the fact that a few of the LCG’s recently (Conquest, Star Wars, and A Game of Thrones) have had problems getting their packs out on time. This should replicate more of a Variable Interval Reinforcement, but something doesn’t quite match up. This type of reinforcement schedule should more closely replicate the CCG booster model due to the unknown nature of packs being released. The main reason it doesn’t is because the contents of the expansions are known before the release. This may come off as strange because you could say that people know the full set of a CCG as well but the cost differences are really what shines here. It is far less expensive to purchase an Android: Netrunner Expansion than it is a full block of a Magic Expansion.

I personally think it is very interesting how buying into these games so closely emulates these operant conditioning schedules, but I probably shouldn’t because it is a very common topic in psychology. The important part is that I think this comparison is the main reason I prefer LCG’s over CCG’s. I have never been to Vegas, I have never been into gambling, so the idea of buying packs to get money cards is kind of a fun thing I participate in from time to time to support my FLGS. How do you feel about the argument made here? Do you think I am full of it or do they make sense to you? Put your thoughts in the comments. Living Card Guy out!