I have been playing Arkham Horror The Card Game for a long while now. I would even say it is one of my favorite games at the moment. Each aspect of the game is designed to make you feel like you are living the character you are playing. From having to make a thematic decision during a scenario to being forced to include weaknesses in your deck, the game connects you to it. My favorite part is building your character. Typically a game either sticks you with a pre-built character and abilities or forces you to know a ton of rules to build a character (Dungeons and Dragons). The elegance in this game is that you can take a single card and maybe two rules and build a character to represent who you are, starting some of the most dangerous investigations you will experience in your life?!?…in game. Today I want to take you through some of the characters I have played and what I liked and disliked about them. 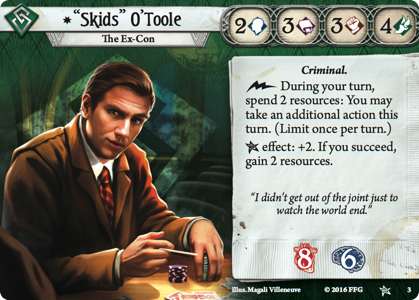 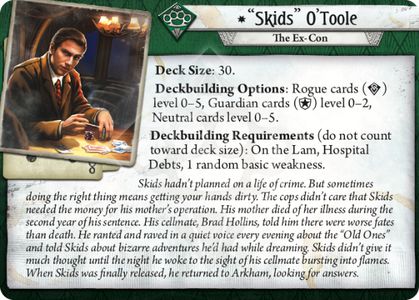 Skids is the character I played solo for The Night of the Zealot camp. The thing I liked most about Skids is extra actions! His deck can have Leo De Luca, The Golden Pocket Watch, Quick Thinking, and Ace in the Whole. At the time of playing, I only had access to Leo De Luca, but that was still good because Skids gets to sue his ability to pay two resources to get extra actions. Getting five actions a turn can mean the difference between killing a very important monster before they kill you or investigating all the clues necessary to get past a given act. One of the downsides of Skids is his lackluster Willpower stat. This is one of the most important stats in the game to staying alive, and his low sanity can make it a challenge to stay alive. He can have guardian cards, which helps him stay alive better, but low sanity and willpower is a big thing to get over. Speaking of guardian cards, that is another thing I really enjoy about Skids. Since he can Hot Streak for cash, he can also play Dynamite Blast very easily, and that is satisfying. 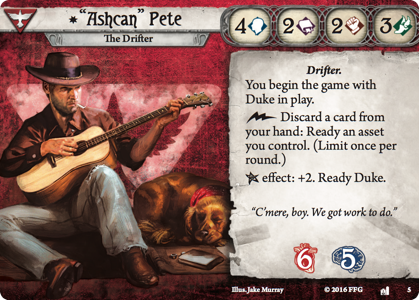 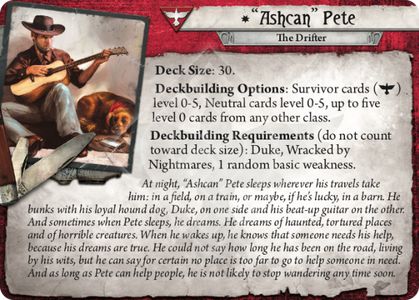 “Ashcan” was the character I played through a two-player Dunwich Legacy campaign alongside Roland Banks. I build a very interesting deck around Pete. The main card was Dark Horse. In order to play off this card, we used things like Fire Axe and Forbidden Knowledge. Both get rid of excess money and get money in a snap. The main reason Dark Horse ends up being great is that it modifies Duke’s ability to investigate and fight things! Being able to do a 2 damage attack with a skill of 5 is a very solid way to consistently remove threats. Also, we find out that using Duke to investigate at 5 is fantastic! On top of this, we see that Pete has a high willpower stat and some extra base health and sanity because of Duke! We don’t want Duke to die though for a multitude of reasons (he is your greatest companion, he makes you stronger, and doesn’t count as an ally), so we throw Peter Sylvester in there to take a licking and keep on ticking. The main downside of “Ashcan” is that if you do not get a good set up, you are in a bad spot and there is not a lot of good ways to mitigate that besides just drawing and getting set up for a few turns the beginning of the game. Also, if your assets get hit with bad treachery, you will have to hope you are close to completing the game. I think this kind of Pete plays great with two people because he is great at being well-rounded when there are fewer threats. 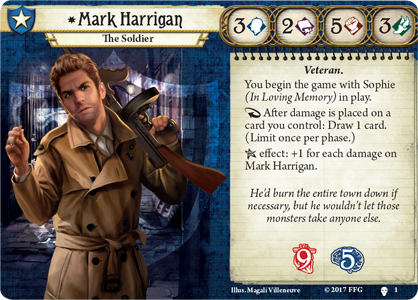 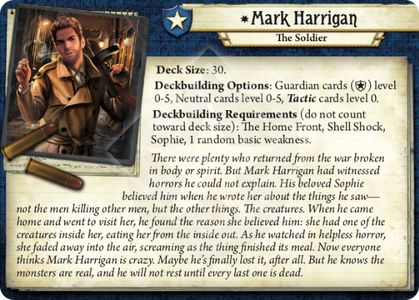 Mark Harrigan was who I played when we did a 5-person game with a group of my friends. 5 player games are usually pretty hard because the game is not really balanced for it (5x the investigator symbol gets rough) so we just used 4 players for any of the investigator reference symbols and still pulled an encounter card for each investigator. That being said, he was still a lot of fun. I build the deck around his response ability. Drawing cards is powerful as it helps you get set up if your mulligans are bad. Mark is also a pretty hefty tank. Nine health and five might is nothing to scoff at. So using a machete and his starting asset Sophie to get a lot of serious threats off the board. The major downside of Mark is that he has very restrictive deckbuilding rules. Normally not having a class restriction on cards you can include in your deck is a great thing but unfortunately for Mark, there are not a lot of tactic cards in the game at the moment, that are within his means (i.e. they are expensive). However, not a lot of investigators are going to say no to Sneak Attack, except for Mark who is only marginally good at evading enemies. Playing Mark was very one-dimensional as he only really does one thing well, with the exception that he can use Sophie in a pinch to pass most tests.

While the title says “Best”, I only know from my experience, and these are some of the investigators I have had a lot of success with. I know a lot of people really like Rex as he can draw a lot, but I have yet to play him so I didn’t want to talk about him here. Who is your favorite investigator of the game? Let me know in the comments! Living Card Guy Out!