There are a lot of characters in Star Wars Destiny, but we don’t always get to see all of them when reading about the game online, watching tournament videos, or even playing in events ourselves. One of the best things about this game is that even with such a small card pool, we still have decks surprise us in our local meta. Where villains once stood supreme, heroes are now slowly showing their might. So today I would like to talk about some of the decks I have been playing around with and why I like them. 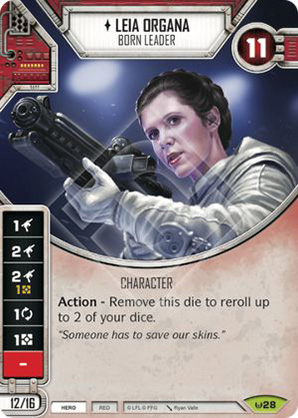 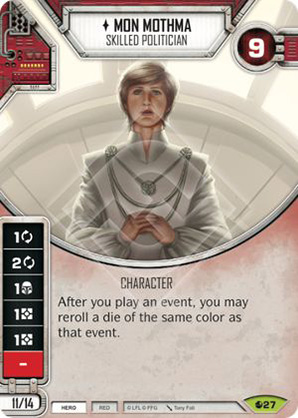 At first I was not convinced this deck would do well, due to it being a single color deck and having two not-so offensive heroes. After playing it however,I am pleasantly surprised by its speed and ability to roll an obscene amount of dice. Starting off with 4 dice on two characters is amazing and the exact reason why it plays Carbon-freezing Chamber. It has just enough guns to be dangerous with Leia’s sides and since the deck is mono red, Mothma’s ability is fantastic. The deck also has a fantastic event suite, with Suppression, Rebel Assault, and many other cards you can control the battlefield, get ambush actions, and reroll your dice. The last thing I really liked about this deck was the amount of dice manipulation. Both of the character have ways for you to get the faces you need on your dice, so consistency is pretty high. 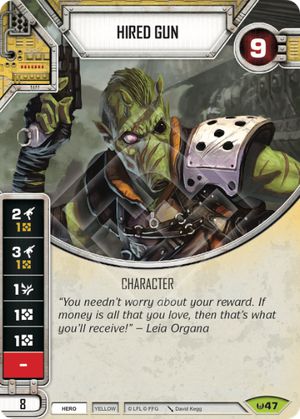 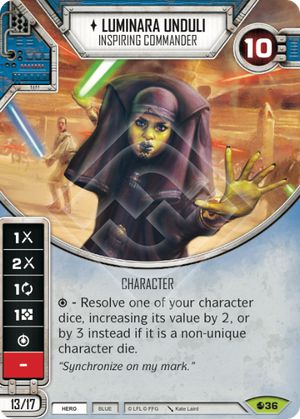 Since the dawn of time player of Destiny have been looking for a way to allow Luminaria to increases a die’s side by three. Today we have found it! This deck definitely looks a little unstable due to high cost of the cards, but you actually get a ton of money. With a Cunning in your opening hand you have a very high chance of getting at least 3-4 resources on the first turn. This means you can drop a Bowcaster on turn two and be ready to deal a crazy amount of damage even without Lumi’s ability. There are a lot of upgrades in this deck, but I think it is well founded. The idea is to use Lumi to make your Hired Guns brutal killing machines and keep them alive, so the progression of the turns becomes an upgrade fest. I would highly suggest trying this deck out mostly because it feels great doing 13 damage to a character in one action. I will let you figure out how it happened ;). 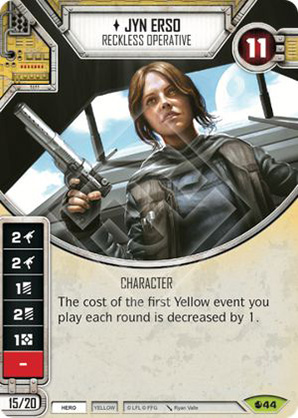 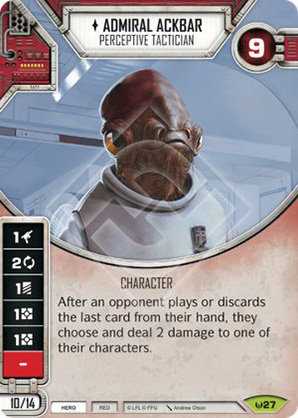 This is a poorly named creation of my own. I really like Jyn’s dice, especially since she works well at both milling and killing. I figured if I was milling, why not add Ackbar so I could do some extra damage from my main win condition. The rest of the deck revolves around manipulation of my opponent’s hand with events, Scout, and Maz’s Goggles while also milling them with Con Artist. C-3PO also makes this deck annoyingly good. Being able to get a 2 value side of any symbol is a great ability, which fits right into the toolbox of this deck. Lastly, the events in here are a bit weird, but it is mostly because Jyn lets you play the first one for less. So a 2-cost Reversal on a 2-3 damage side is great as a follow up action to your opponent’s opening roll.

I really hope we see more decks come out from the hero faction. As much as I like eHan/eRey I think I find myself gravitating toward the villain affiliation more often than not. Nothing in particular changed to make these hero decks fun except me really just trying them and falling in love. The hero faction does feel a lot like the heroes in Star Wars. They are underdogs which strange and inventive strategies. So next time you are looking for a new deck to build, look at your heroes first. Time to jump!