Skip to content
Home » The Hyperlane Report: The Tools of the Trade

The Tools of the Trade

Star Wars Destiny, like many other card games, allows players to have certain sets of cards that will go in most decks of a certain affiliation, color, and type. In previous LCG’s I have played, those sets of cards were called suites. In Android: Netrunner specifically, when a set of ice is used, seemingly independent of the other cards around it, it is referred to as a suite. Today I want to look at some of the suite-like sets of cards in Destiny! 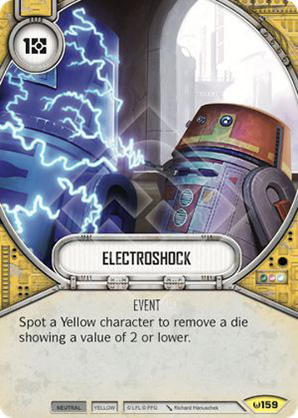 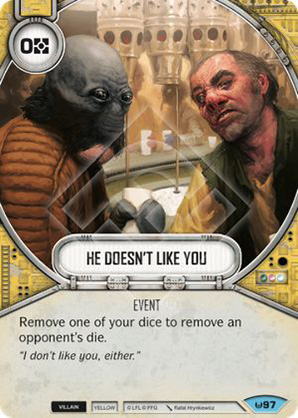 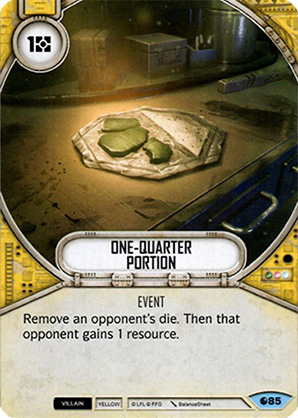 This first suite I wanna go over is a set of events typically associated with yellow villains. It centers around very efficient dice removal. Baddie Rogues have some of the best removal in the game and as we will see later, this suite very often coincides with others to make a deck that can lock your opponent’s choices down. One-Quarter Portion is great especially in a disrupt/Salvage Stand deck, but even without disrupt, the ability to remove any die by giving your opponent a resource is great. He Doesn’t Like You is amazing if you have initiative, and Electroshock is the best neutral yellow removal outside of villains. 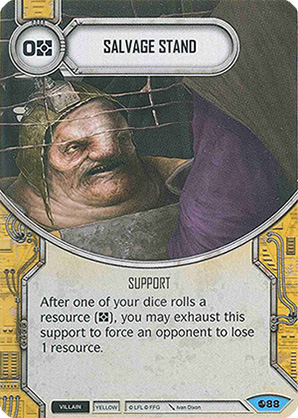 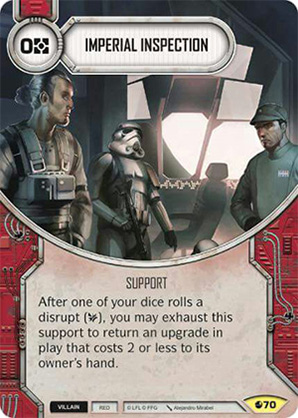 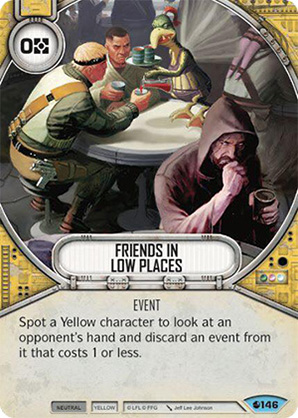 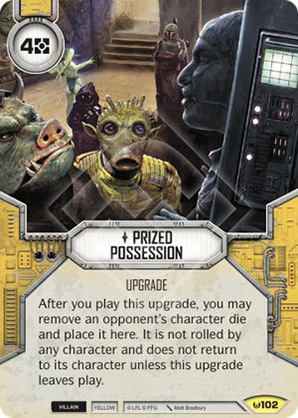 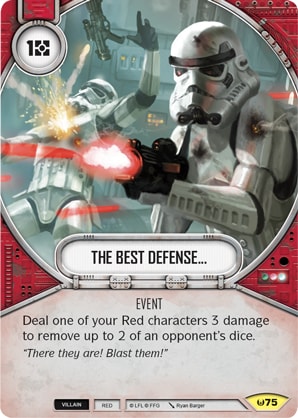 This next suite really shines in control decks. Right now that usually has Unkar at the helm and at least one red character, and after Thrawn comes out, we will probably see some crazy control decks with those two, since both of them can be eliet at 30 points. Imperial Inspection and Salvage Stand are the real heroes here. They bounce your opponent’s key attachments and keep them light on resources. Some decks get around this now, but they are still solid cards as they are free to play and can push actions when necessary. Friends in low places is in here usually to target cards that have functional importance to the opponent’s deck. It also lets you look at their hand which is ever-so underrated, even more so when Thrawn arrives. We round off the suite with Prized Possession and The Best Defense for some seriously effectve dice control. All around this is probably the most annoying suite to see in the game, right up there next to seeing a Planatary Uprising…on turn one haha. 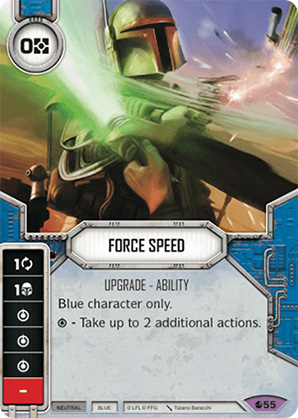 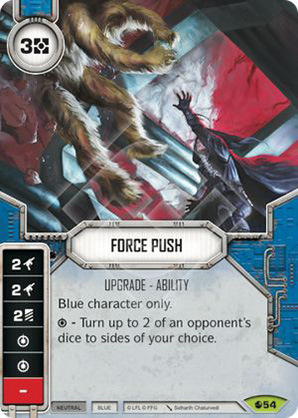 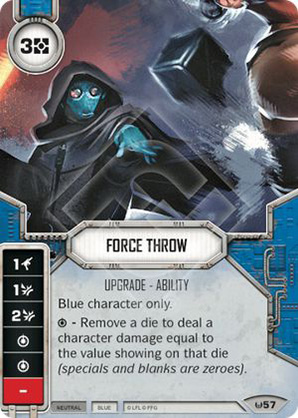 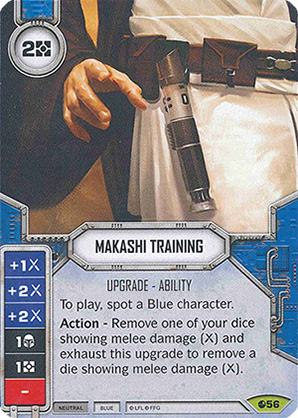 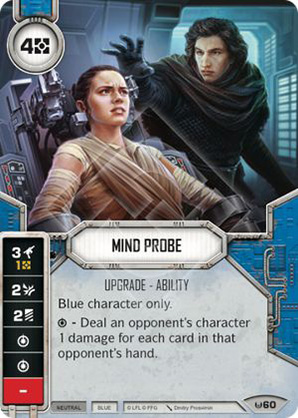 These are the cards you will see in almost every mono force user deck, regardless of affiliation. These are the neutral force abilities that are used around the specific ones for the affiliation you are running. Each ability has a very interesting use but they all center around controlling your opponents game state and dealing damage. Force Speed is there to make sure you are doing all that stuff as fast as you can. Think of it like a toolbox where you play what you need at the time. If you run villain, you add Force Lightning or Force Choke, usually not both. if you are running hero, you don’t run anything else usually haha. Some people running heroes will add Lightsabers, Force Training, or One With The Force, but there are not many other excellent force hero cards. 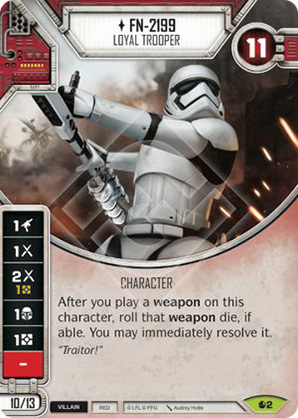 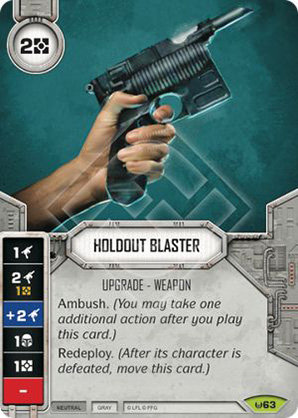 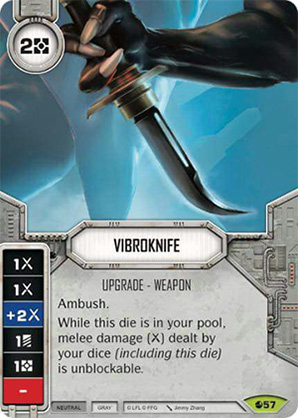 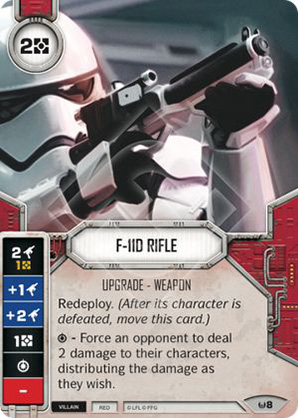 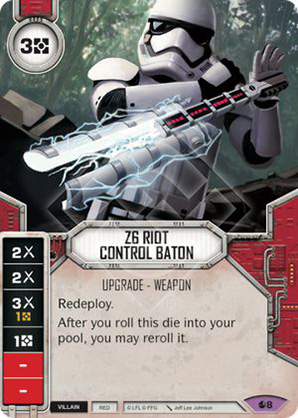 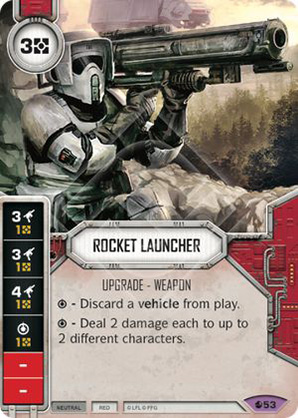 This suite is one of the true suites of this game. Meaning is can exist independantly in a deck. It is a set of cards that revolves around a villain that can be put with a number of other villains to form a pretty solid deck. FN-2199 (Nines) is a great character and adamage output is crazy. Whenever he is one of the two heroes you will see 5 specific upgrades in the deck as well. Holdout Blaster, Vibroknife, and F-11D Rifle are the base. These cards can be played on turn one and rolled twice to get some damage going. If they roll a resource, then they can be easily replaced with the big guns, Z6 Riot Control Baton and Rocket Launcher. Again, Nines outputs some serious damage and it is nice because he can do it almost on his own. When paired with rogue teammate Nines loves Vibroknucklers and Flame Throwers, as they add melee damage and vibro has ambush and a pay to increase side ability. When Nines has a force based ally, Lightsaber is the go-to because of it’s heavy damage sides. Either way Nines is a great team mate for any build. We have seen him shine in both control decks (European Championship with Unkar) and rush decks (Nines and Anakin).

So there are some of the card suites I saw in this game. Not all of them are true suites in the way that we see in other games because they cannot exist in ANY deck, but they are pretty close. So did I miss anything? Do you have a card suite you like to play? Let me know in the comments. Time to jump!