Skip to content
Home » The Hyperlane Report: How Special Can You Be?

How Special Can You Be?

Sometimes the best parts about playing games are learning about the complexities of the rules. I know it sounds weird to praise a game for its complexity which is generally talked about for its simplicity, but there are some things that just have to be explained. Also sometimes it is nice to take a step back and realize that not everyone that plays will know all the rules. Today, I am going to talk about resolving special sides and the complexity that can sometimes arise within.

A good place to start here is to talk about how dice resolution works. When you take an action to resolve a die you can resolve any number of dice in your pool in any order you want. This means if a die were to enter your pool with a special showing you now have one more die you could resolve, as long as you were already resolving specials. 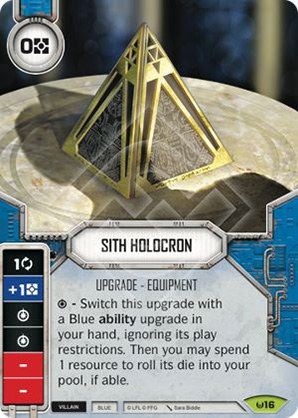 First, I would like to focus on the Sith Holocron special side. Rolling a new die into the pool seems to confuse some people as to its validity to be used. Unlike other games, dice can be used any time they are in your pool, which is awesome. So for the case of Sith Holocron, if you roll in blue ability’s special you can use it right then as part of the same special resolution action! Pretty neat right! 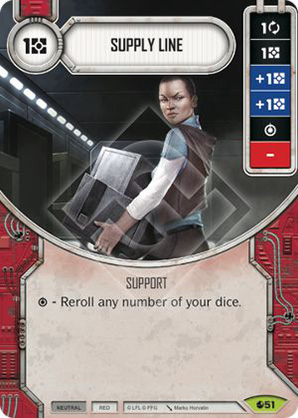 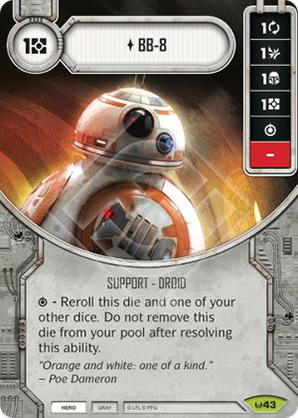 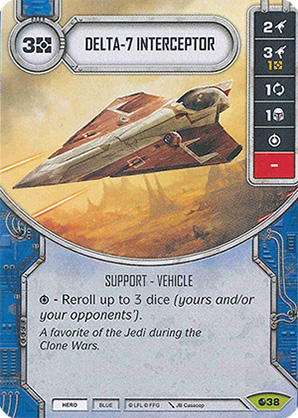 Another really interesting card is Supply Line. Since its special side lets you reroll all your dice, you can swing from having no specials to having a bunch more! Nothing better than rerolling 5 dice and being able to resolve some more of them in the same action because you rolled special sides! BB-8 and Delta-7 Interceptor also fall in this category of rerolling one or more dice and using them right after if any of them rolls a special. 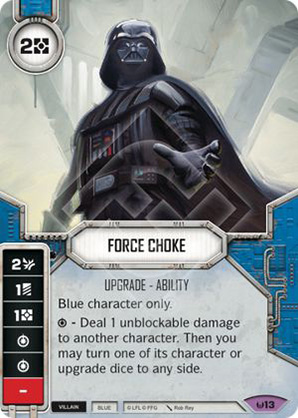 Another interesting special interaction is using Force Choke on one of your own characters to be able to resolve a special side in the same action. This works well for getting a special side on a character (Kylo or Baby Vader) or getting one of their upgrades to its special side (various lightsabers, other force abilities, etc). 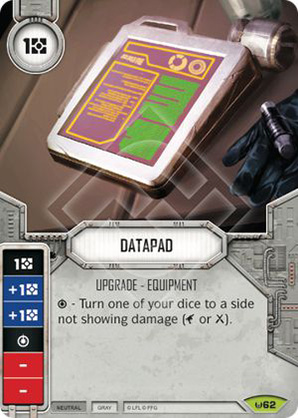 All these other cards are pretty awesome at getting your special sides all resolved at once, but nothing does it quite like, Datapad. Datapad’s special could be used in place of a lot of the combos we saw today and it can be used to start them as well. All in all, Datapad is the most consistent when it comes to triggering special combo action chains, as it lets you turn dice to a side without much of a downside in terms of dealing damage, and since it is an upgrade you get to use it each turn to keep the combo chain going! Suffice it to say I am a fan and am using it in a support deck to get some real killer value from firing Supply Chain’s special side.

Special action chaining is a real thing. Not only does it signify a good understanding of the rules, but it also is a hallmark of top tier players. But it also feels really cool to pull off some of these crazy combos and watch your opponent’s jaw drop. What did I miss? Did I explain something wrong or incorrectly? Did I just flat out miss a good card here? Let me know in the comments. Time to jump.