Star Wars Destiny is a game of many parts, there are characters, dice, tokens and more, but one key component of any game is the battlefield. Where you fight your battles not only sets the theme and feel of the match, but also allows the players access to special abilities! Today I wanted to go over some of my favorite battlefields. So in no particular order here we go! 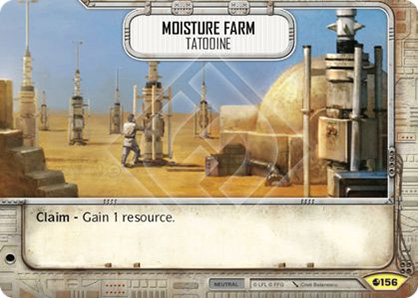 I have been running this in my Triple Death Trooper deck and it is really a solid battlefield. Not only does it give me money, but it also is not something that is a HUGE boon for your opponent upon claiming the battlefield. I am a fan of running this in decks where I don’t really need a battlefield, but don’t have to stress about my opponent claiming on turns I am running slow. So unlike the next battlefield, I am going to talk about this one as relatively safe. 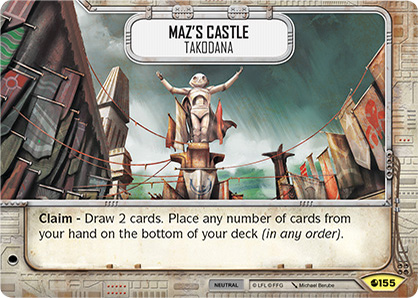 The castle is a great battlefield for fixing your hand, and it is an equally good battlefield for saving your hand from discard effects! Since you get to draw two, you get to decide if you wanna keep cards for the next turn and ditch the rest, or if your opponent still has dice but you wanna save yourself from being milled, you can just pitch your hand and draw all the cards at the beginning of your turn! I personally find the latter very satisfying. 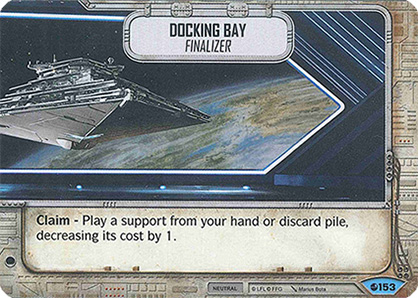 If you like to live more dangerously, perhaps Docking Bay is more your style. This little beauty is one has been played in some of the fun decks I have been running. It is really nice at getting back a card you may have earlier pitched for rerolls or as a final action to drop a cheap support and get ready for the next turn. Strangely enough, I tend to not use this for high-cost supports and instead works really well with cheap sacrificial supports! This one also is moot for your opponent most of the time, which is also good!

This battlefield, on the other hand, is not moot for your opponent. This one is fun but dangerous and you wanna make sure if you run it you are gonna be claiming 90% of the time. Really good to get some serious extra damage out there, but with the upcoming set, you could see it used to resolve a Lando die to get some money as well. I like the idea here and that is why I have it on this list. Resource costs look like they are going to be a big deal in Empire at War so this battlefield is a good complement to that. Consistency is a dream state in a game about rolling dice. Especially when you are having to use extra actions to activate all these darn supports. Being able to reroll each support you activate means you are saving cards and being more consistent, Huzzah. Suffice it to say I am looking forward to using this in a support heavy deck, maybe one based around vehicles. *winky face*.

I like that the game has one single type of card that has to be included in a deck. Much like MTG’s EDH and Netrunners Corp/Runner Id’s the battlefields help define how a deck can potentially work or are there to support an archetype that is fun to play. Either way, the battlefield is one of the most important yet subtle aspects of the theme in the game and I totally dig it! What other battlefields do you like? Did I miss any strategies you like with any of the cards seen today? Let me know in the comments. Time to jump…