Skip to content
Home » The Hyperlane Report: Are All Uncommons Created Equal?

Are All Uncommons Created Equal?

Being back in the realm of a CCG means a few things for someone coming from the LCG world.

This last one has really been the hardest for me. Especially when talking about valuing cards. Commons are usually ones I give away to new players, but the uncommons seem to be used more often and are better for trade fodder. You still only get one per pack, so they are pretty much like rares. This brings me to my article today. There are a few uncommons that I have not seen used in very many decks. I want to look at them and see what we can do. This card is one you see and think, “I want to do that!!” But then you realize that when you mostly only ever deal 4-8 damage a turn with other card effects, it is really hard to show 10 on your dice. Don’t worry, I have a plan. Accept the fact that you will not be claiming and don’t resolve your dice until you have exactly what you need. How do you get high number faces? Play some seriously brutal supports like an AT-ST and/or a Slave One and it will be really easy to show 10! 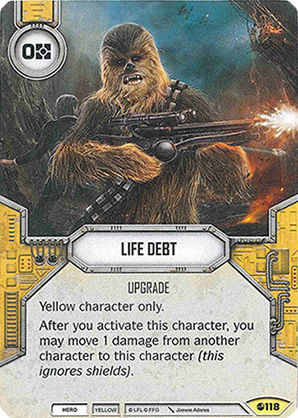 This card would work great if you could force your opponent’s characters to have a Life Debt to you, but you cannot. So I am thinking we use this card to keep one of your prominent characters alive. If we put this thing on an Outer Rim Smuggler or a Hired Gun we can get some more mileage off your eObi, eJyn, eLuke, or even eMace. Weirdly enough it may actually be a good thing the movement doesn’t take your shields away, that way your small guys can stay around longer. 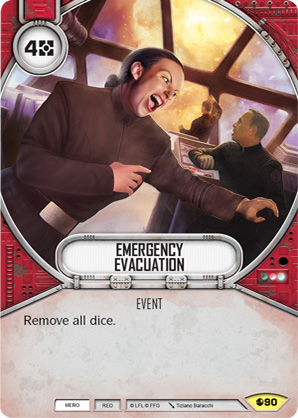 Four resources is really expensive and the fact that you have to remove all dice means everything you have gets reset as well. So why don’t we try putting this in something like a mill deck, where we are relying on our ability to survive a long time. If we let our opponent roll out then play this card, we don’t have to deal with their dice at all and get to roll ours. When they inevitably claim after we play Evac then we can get a control of the battlefield using something like The Day is Ours. How we get the four resources though is still a bit of a mystery… 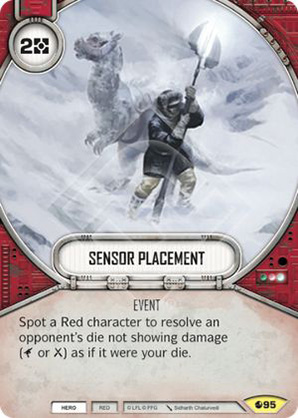 The two resources you spend on this card are the big wall here. It is still pretty good removal though and even gives you the benefit of the die getting resolved. So this card is all about setup. If we can play a reroll card with ambush or give a reroll card ambush, we may have a shot of using this card well. Unpredictable, Doubt + Swiftness, etc. would all be good setups if you have the money. 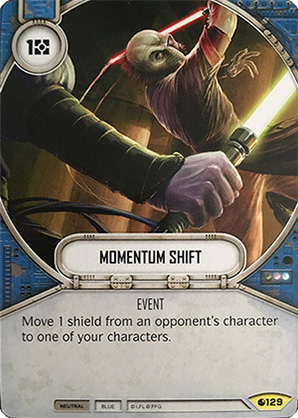 Universally panned as a bad card, I think Momentum Shift has promise. In fact, I was even inspired to ask Lukas about how this interacted with Qui-Gon for a deck I was building. This card does allow Qui-Gon to deal damage with the movement of a shield and that is pretty awesome. Now you can either pay one for a large Riposte set up or you can pay 1 to deal a damage to an opponent’s character. 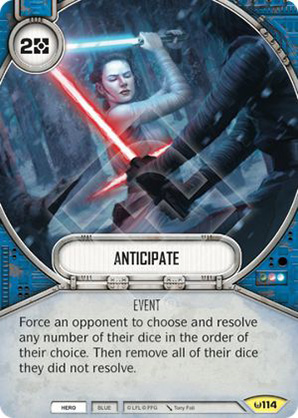 For two resources you can give your opponent as many actions as they want to resolve their dice! Yeah it doesn’t seem good at first until you realize that since they are resolving them with card ability they cannot use modifiers. That can be very clutch in the right scenario. One would be your opponent is rolling mod damage sides on Lightsabers, Knives, or Holdouts. Another good scenario is it being a surprise when an opponent doesn’t have enough money to resolve all their dice. I think it merits play as a one-off in any deck that has the extra resources for it.

As you can see most of the uncommons that aren’t seeing play are from the Hero affiliation. Now if that is because heroes just aren’t seeing as much tournament play or they are not as well loved as villains I don’t know. I can say that some of these cards getting overlooked could mean you may take a tournament by surprise, even with such a small card pool. I urge all players to try to take jank builds to events and try to win, because nothing feels better than punishing a meta that isn’t expecting you. What do you think of these cards? Do you have decks with them or are they in your “do not use” box? Let me know in the comments. Time to jump!