Skip to content
Home » The Hyperlane Report: A Pilot and a Pirate Walk Into a Bar

A Pilot and a Pirate Walk Into a Bar

There are lots of decks flying around the game of Star Wars Destiny, but one seems to be talked about a lot more than the others. ePoe/eMaz is the build and it has people in a tizzy. It deals lots of damage all at once and with the wrong rolls (or right rolls for your opponent) you can get burned down pretty fast. So how are people dealing with it? What is the best strategy against a deck that cheats out damaging sides and does it fast! Let’s talk about that today on the Hyperlane Report.

So let’s start with a pretty common deck list for ePoe/eMaz. This build placed top 8 in the EU championships and shares a lot of commonalities with what most people are running.

The battlefield, upgrades and supports in these decks are pretty common, as they all support Poe’s special side resolving very fast. The events tend to be all about speed (Hit and Run) and control (All the yellow events). There are a view variations, but the build is pretty standard because it is efficient.

So how does this deck win? Generally it will kill you before you can even react. There are two main causes of this. 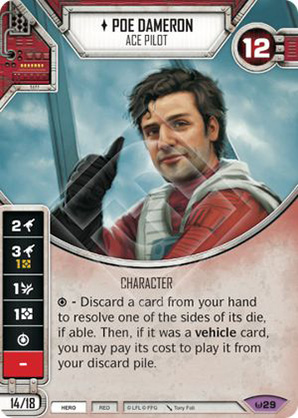 Most of the deck revolves around resolving Poe’s special side as it allows you to do some pretty powerful stuff. Since you have two of his dice, you can resolve his special side twice a turn and pick the side of the die you are dealing damage with. You can get a very good damage/action ratio. Rocket Launcher, DL-44, U-wing, Falcon, and Thermal are your heavy damage dealers, and if you have the money you can even play two of those five after you use his special side. The other upgrades are there to make sure Poe’s special side goes off as often as possible. Maz is also a big deal here, since she lets you resolve two of your dice after activating her. You get some seriously-good optimization out of this effect. As you roll, Maz gets a focus side and then you use the focus to turn a Poe die to special and resolve it all in one action. All of this speed also helps you claim early. A good turn is: activate Poe, activate Maz and resolve two dice (one being one of Poe’s), claim and resolve Poe’s other die. That is where Planetary Uprising comes in. 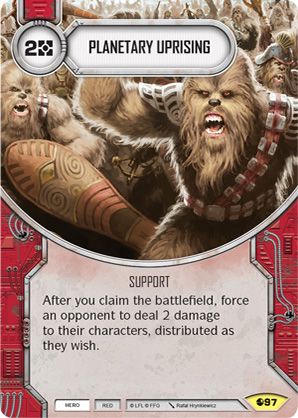 This card is a pretty good card in most decks. It doesn’t require you do much other than claim, and if you have two, you are doing 4 damage to you opponent’s characters. This means in the ePoe/eMaz deck we get an extra 2-4 damage when we claim to use Poe’s special die. If you think about it further, this deck can deal 8 damage that is basically non-interactable. If you claim on a turn, you can simply claim as your first action on the next turn as well to finish off characters. This is brutal combined with the speed of this deck, since you will be claiming first most of the time.

On a good turn this deck could deal 8-10 damage in only a few actions and have first action in the following turn. So how can we deal with this deck’s seemingly overpowering speed and efficiency? 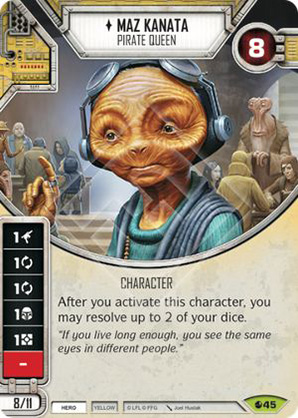 Maz’s ability is actually very important to the flow of the deck. She is also very easy to kill with one good turn of damage output. Eight health isn’t a lot and she doesn’t protect herself that well. If you can throw her off the board in the first two turns, you may have a chance of slowing down the deck enough to get a foothold in the game. Jango/eAurra decks are doing a pretty good job of this and No Mercy/Palpatine openings have been particularly useful at accomplishing this. I think there is a decent amount of decks that can hit really hard, and therefore generally will be good plays against Maz. 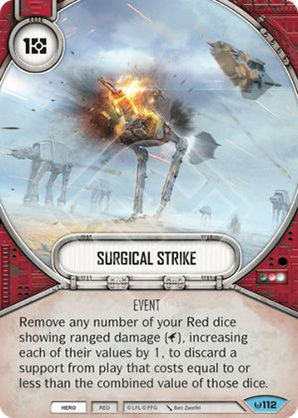 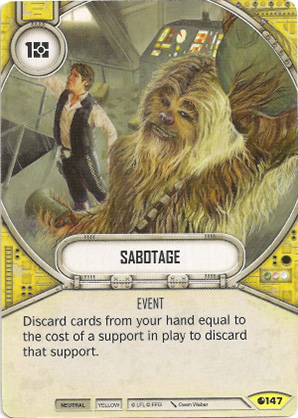 Getting rid of Planetary Uprising is key to stopping attrition. Supports are not easy to get out of your discard pile so getting rid of them is essential. I really like Surgical Strike, but hardly ever play Red Heroes. Other than that, everyone has access to Sabotage. It works well against a lot of meta supports mainly, Imperial Inspection and Planetary Uprising. 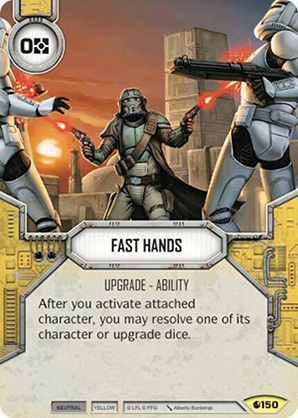 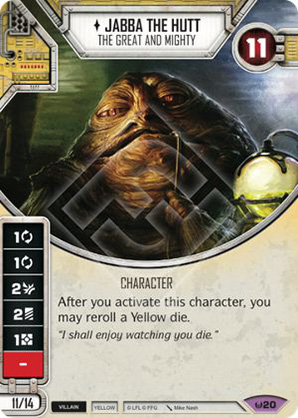 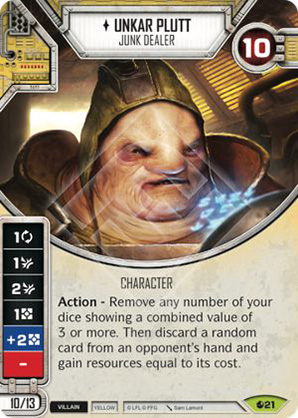 Yes, getting cards out of your opponent’s hand is always effective. but against ePoe/eMaz, it is particularly an advantageous strategy. Fast hands on eJabba is very scary as it will allow you a lot of chances to hit there hand hard. Since the player controlling Jabba gets to choose the order in which effects resolve, you can reroll with Jabba before you resolve fast hands. This is even before you think about putting two fast hands on Jabba Unkar’s ability. It will not only let you hit their hand, but also lets you get money, and can be used multiple times a turn. I was thinking of talking about Blackmail here as well, but ePoe/eMaz will have the money to force you to remove the die as they generally don’t care about playing anything but free or cheap upgrades.

All of these are just generally things that should help you battle against the seemingly overwhelming forces of an Ace Pilot and a Pirate Queen. The deck is good but it can generally be beaten. Some people on the web believe that ePoe/eMaz is kind of an auto-pilot deck, that doesn’t require much skill to play. They claim it can be beaten by a a better player with a more control-style deck. Whether you believe that or not is a topic for discussion and I am sure it has been talked about elsewhere. How do you feel about ePoe/eMaz? Is it an unbeatable monster that is breaking the game or a good deck benefiting from Empire at War not being released yet? Let me know in the comments. Time to jump!