I’m Kevin, most call me Kev.  I have been playing video games for 25 year or so and just recently thought it would be cool to write down what I think of them.  I’m no writer so hopefully these get better the more I do.  Enjoy them and let me know if you have feed back or just want to talk about the games.

This is the action-adventure you’ve been waiting decades for. After a lab accident, a scientist awakens in a mysterious, alien world. Is this a distant planet? The far future? Or a complex virtual-reality computer simulation? 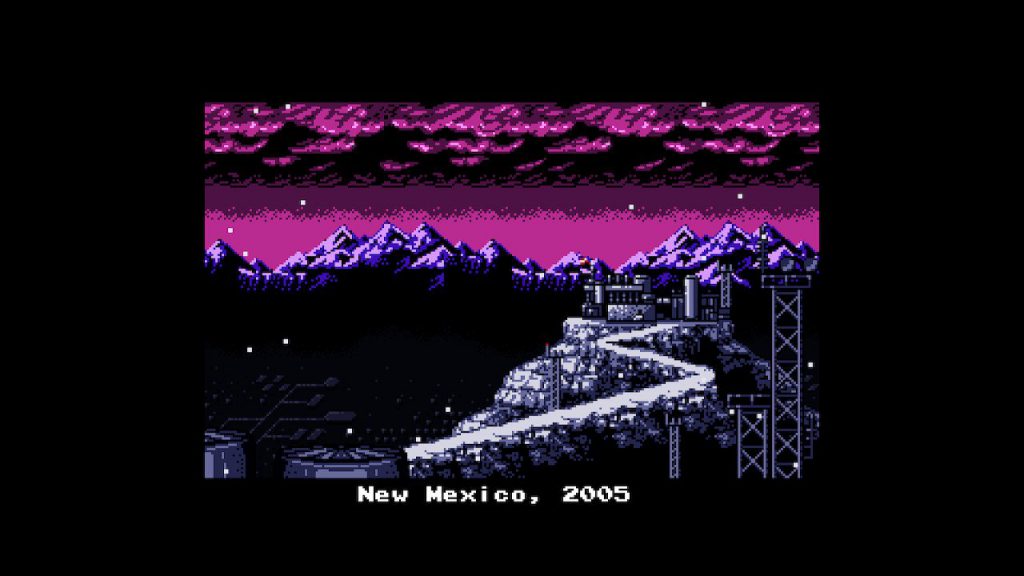 Axiom Verge (AV) starts out in 2005 in New Mexico.  You are a scientist, named Trace. Something goes wrong and the building collapses around you.  You wake up in a pod of some kind, in a strange place with a dark figure telling you to grab a gun in the next room.  From there the story gets really interesting, especially if you look into it and gather every note.

Basically you are injured enough to nearly die and you become paralized from the waist down.  But you turn your mind to science and actually figure out how to travel to a world between worlds and unlock that worlds power.  There are massive beings called Rusalki and the world is in ruins. I won’t spoil the game if you want to play it yourself, but there is time travel of sorts and you find out some crazy stuff.  It is a really cool sci-fi story. 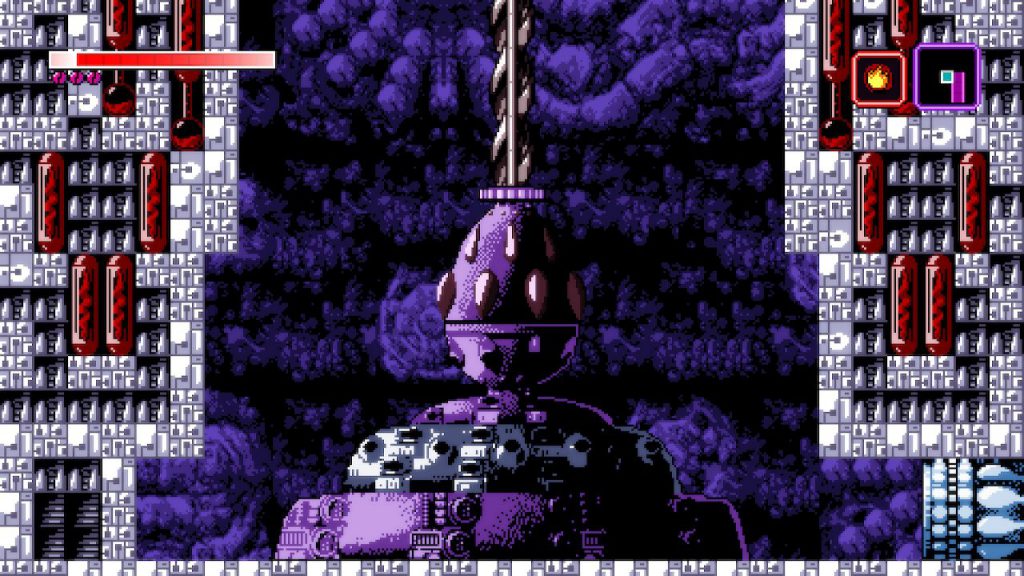 Like a lot of the indy games (independent, or developed by a small team of people.  This one was made by one guy!), the graphics in the game are modern retro, it looks like it would be at home in the 8/16 bit era, but with modern touches like widescreen.  The colors are nice, but pretty dark. It gets more interesting later on when you get further in the game and start to go outside and see different areas and terrains. Trace looks really awesome.  The more upgrades you get, the better he looks. Later he wears a badass lab coat that allows you to phase through walls and things, but the cool part is you can see the trench coat and it changes as you upgrade it.

Your weapon will get more addons that you can see and you will get mutations that give you extra arms that pop out of your back like Doc-Oc.  The sound effects and music are also pulled from the 90’s with dark chiptune tracks and simple laser type sounds for weapons and enemies. Most of the music is more or less background noise, not in a bad way, more just as ambience.

I really like the way the game looks, the pixel art in the cut scenes and all of the playable areas look awesome.  The bosses and Rusalki especially are amazing. 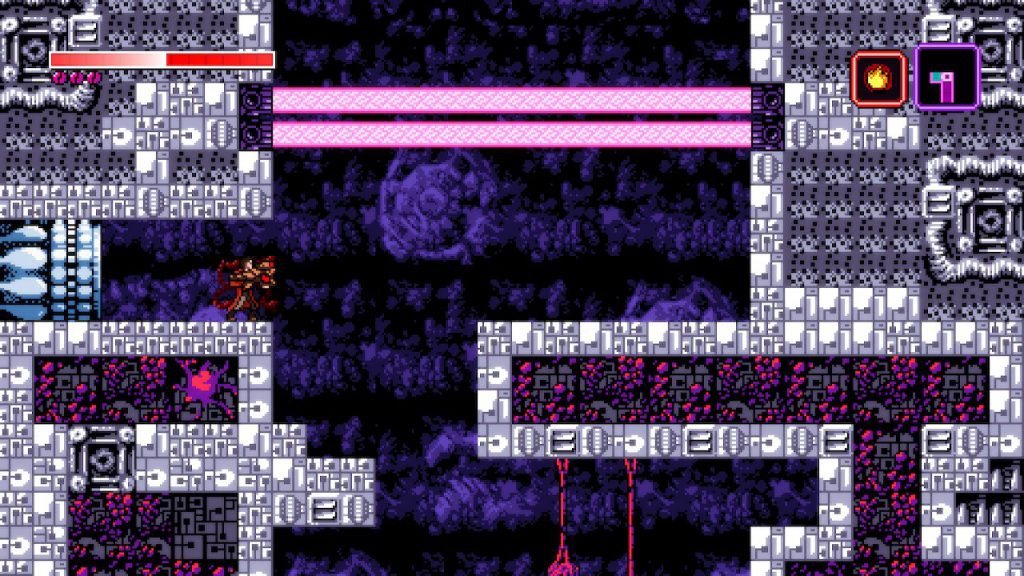 Some don’t like the term, but this game is solid metroidvania.  You start off with no upgrades and a basic weapon and slowly gain new abilities.  As you track though, you will often find areas that you can not access and eventually an upgrade will allow you to get there.

Difficulty wise, it’s not extremely bad, but a few of the bosses do put up a good fight.  I found some stretches between save points (which refill your health) were nip and tuck all the way, barely making it out with a sliver of health left.  There is always a save point near a boss so you can easily go in with full health and if you die, you are close to re-try it.

The game also has platforming sections, but nothing ever to crazy difficult, I would say it more focuses on combat.  Although there is a point later in the game where you get a hook shot type of thing and it takes a bit of fidgeting to get used to.

Upgrades and weapons add-ons come pretty regularly and I found that if I was having any trouble at all with enemies or bosses, switching out weapons was usually the solution.  There are tons of different weapons in the game ranging from your basic blaster, which fires a single projectile ever time you hit the button to shotgun blast electric guns. There is a massive variety of firing types.  Also it felt like the better the weapon, the harder it was to find. The best weapons had nice long range and some even fired through walls, which made some of the enemies much easier.

Bosses are a blast in AV..  Many of them are huge, taking up a massive room.  To accommodate for their size, when you get in the room it zooms way out.  So Trace looks tiny on the screen and the boss takes up most of it. With the higher resolution and pixel count, even when Trace is tiny on the screen you still lots of detail.  I thought it was a really cool mechanic and it made you feel like you were taking on a huge massive monster with just your tiny self. 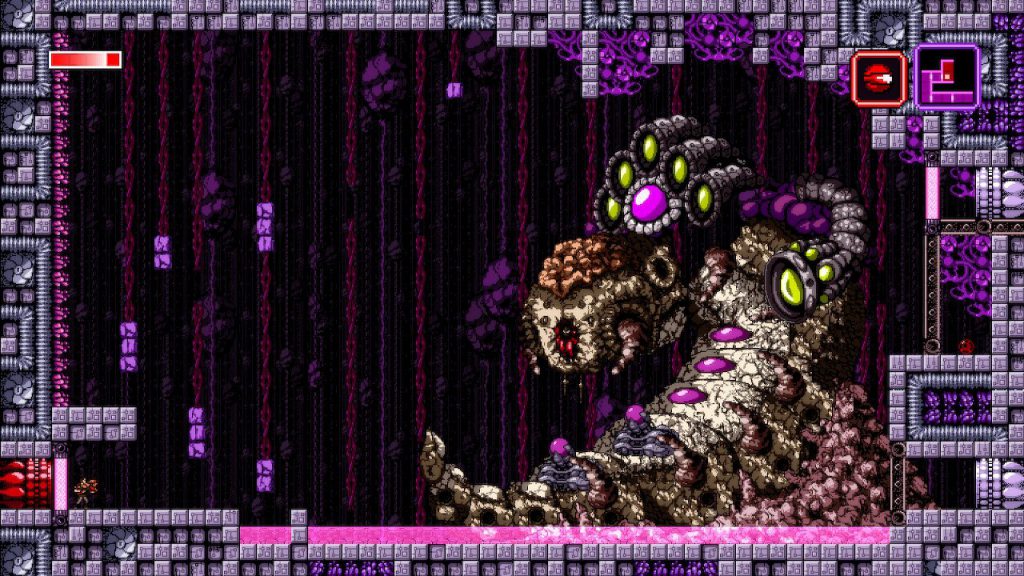 I paid 14.99 for this game, and have got over 15 hours of playtime for one run through, so the value is pretty solid.  There are no expansions or anything. Also I went through very quick, if you spent some time collecting every weapon, health and damage upgrade and notes (also translating them) you would probably have 20 or 25 hours in.  That is pretty good for a 15 dollar game.  I enjoyed the game, it was really fun to play.  If you like any of the old school Metroid games, this will be one you need to play through, it is very much worth your time.