The Future of Card Games

Well folks, GenCon has just wrapped up and now we have a bunch of new board games to talk about. However, I am a lot more interested in a few of the new card games that were introduced at GenCon this year. I know typically I don’t cover CCG/TCG stuff on Boxed Culture, but these new card games don’t really have any place. So today I wanna give my thoughts on two: Keyforge and Warhammer Champions 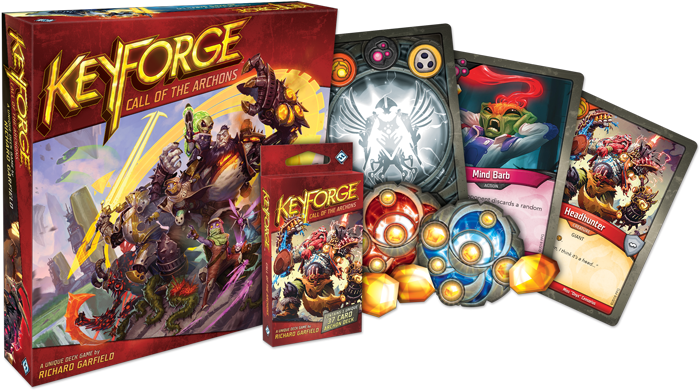 This game was present at the annual GenCon In-Flight report (and even some decks were giving out there!) and is the brainchild of Richard Garfield. The game is what Richard wanted MTG to be where each deck that is played is unique and every game is new and different! In Keyforge each player is an Archon who is battling in the Crucible. The Archon who forges three keys first is the winner. It is quite easy to learn, but has a ton of depth. Keyforge is not your average card game however… 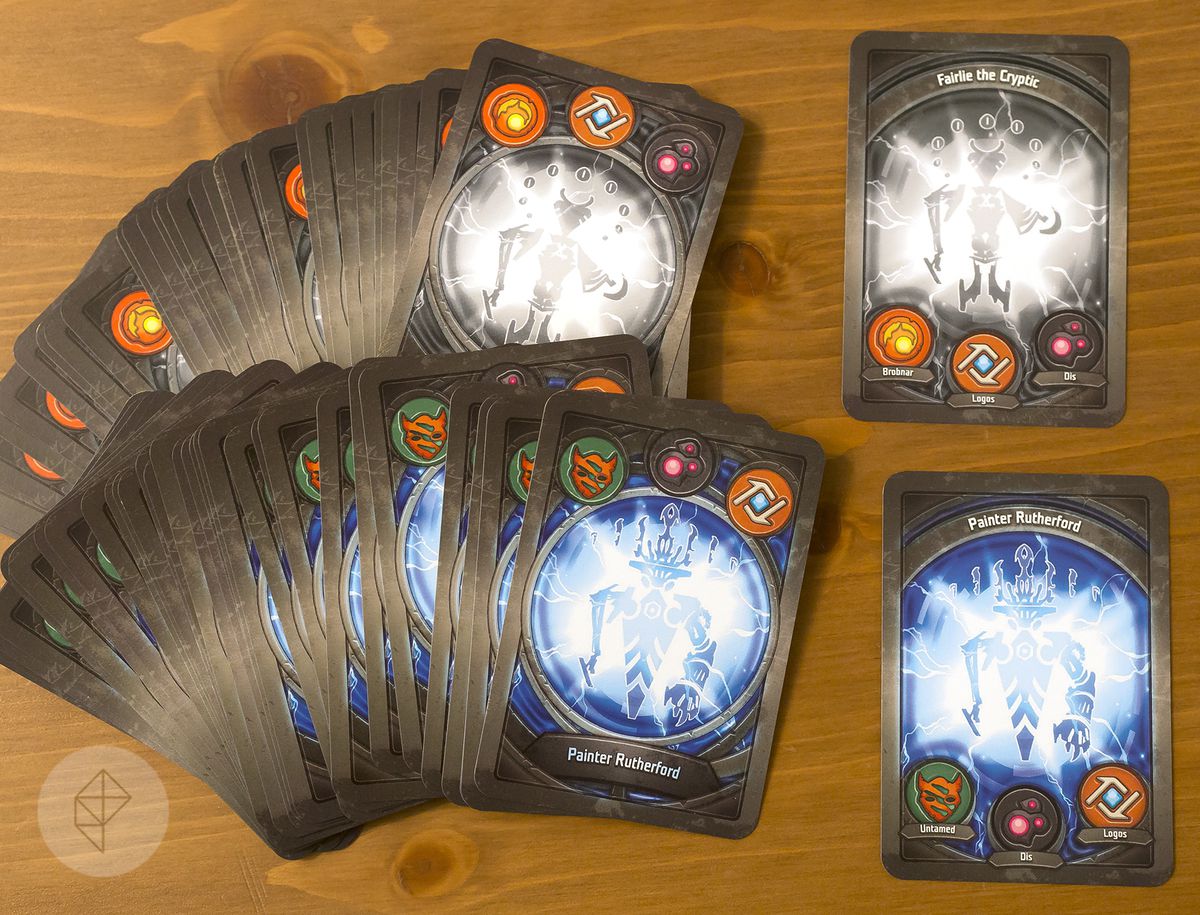 Each deck has a custom backing showing the Archon logo, the faction symbols, and the name of the Archon!

In Keyforge there is no deck building. Each deck is $10 (at the time or writing this) and it is a procedurally generated deck. There are a few comments on how this works, but in summary it will choose three of the seven factions and build a deck using those three. Things like combos, synergy and staples are considered as well. So in the end you will be able to spend 10 dollars to get a fully playable deck, period. Balance issues are handled in a few ways such as tracking deck play and standings. Using the chain system to control card draw for powerful cards, and the nigh infinite list of possible decks, FFG claims there are over 104 quadrillion deck possibilities. Buying new decks can be done for many reasons; you’re bored with your current Archon, your deck is not playing the way you like, or even just to have a bunch of Archons at your disposal. You can also just trade decks for other decks as well since the whole deck is custom themed for that Archon! 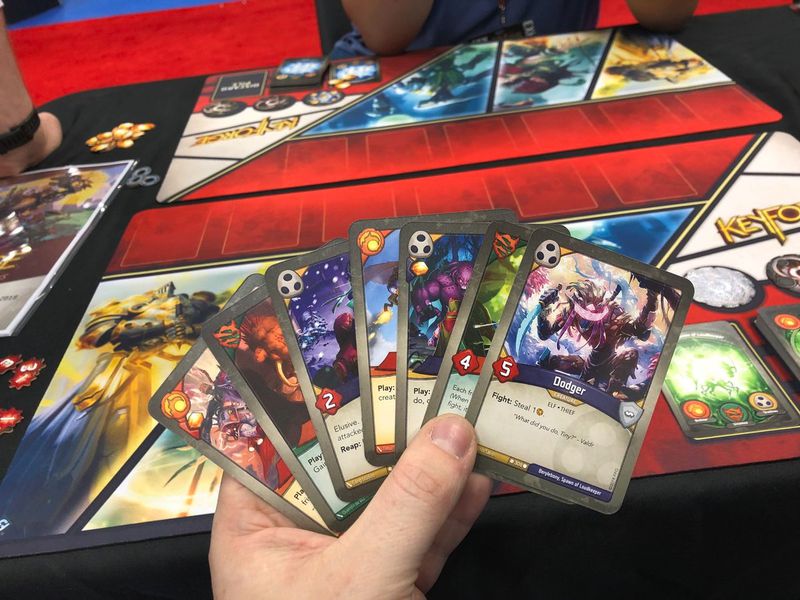 The game play is pretty straightfroward, with each player choosing a faction on their turn to decide what cards they can play or activate. There are no resources in the game, so players don’t have to micro-manage anything. At the end of the turn, characters are readied and the player draws back up to 6 cards at the end of their turn. Certain cards and actions will generate Aember which you need 6 of to create a key at the beginning of your turn. First player to 3 keys wins. Games are pretty quick, but the depth of decisions is huge here. When you use which factions and how to activate your characters is a huge deal. I am very excited for this game in November (hopefully) and I cannot wait to see what happens in the meta and with the community.

Warhammer Champions is a game created by Play Fusion. Play Fusion is a newer company founded in 2011 with seemingly no other big projects under their belt. Their mission statement being:

Creating artificial intelligence and robotics to pioneer the future of mixed reality.

Despite this seeming lack of previous work, Champions was very intriguing to me for a few reasons. 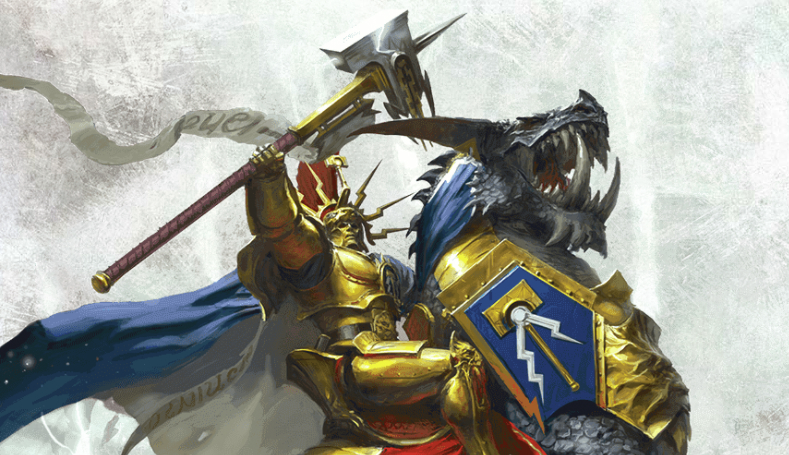 First and foremost, I have a thing for the IP. Warhammer’s fantasy setting is something I love. It is one of my favorite fantasy settings and Warhammer is an IP that is ripe for new card games after (R.I.P) Conquest getting shutdown mid-run. Even though a lot of haters tend to dislike how Games Workshop handled the mythos of Age of Sigmar, I still am a fan, and so seeing all the new art and themes gets me excited. It is also very cool to see one of my favorite IP’s get a new card game. And by new, I mean completely innovative and new.

While it kind of pulls from other games’ ideas and mechanics, it is truly its own beast when you set it up on the table.

That is the second thing that excites me about this game. It is fundamentally a new concept of a card game. No resources, card turning that does not just designate as a card has been used, and table position based effects and abilities. A lot of the things about this game truly lead one to believe it has been designed specifically to feel like you are leading an army into battle. To make a deck, you choose 4 champions that will lead your army (deck), hence the name of the game. Then you will also choose 4 blessing cards that give your champions mid-game bonuses and effects after they complete their personal “quests”! Then your army or deck is made up of spells, units and abilities to fill it all out.  Each player positions their champions then randomly distributes a blessing under each of them. Then the players set their life total. Rounds consist of each player doing the following:

I will say the cards are kind of text-cluttered and have a lot going on. There are quest symbols on champions or damage corners on units and spells. All the key words are highlighted and the text and card borders are kind of plane and robotic. It is like some aspect of the cards’ design are done in a way that ignores ascetics, but there is a method to the madness.

The final thing that intrigues me about this game is the digital consideration that was taken when designing. Play Fusion decided to use augmented reality to let you scan cards for input into your digital collection. Yesd unlike any other TCG, Play Fusions, right off the bat, is allowing players to sync their real life and digital collections. This is awesome for testing decks before you build them in real life and making it so you can play this game all the time anywhere. This also kind of explains the verbiage in the game (highlighted being a term they use) and the stock font and design. Additionally scanning a card someone has already scanned and claimed will allow you quick access to being their friend and something about leveling up that I am not sure about at this time. Finally some of the product will have digital booster cards that you can scan and share with others. The more that scan it the better the rewards you will get from the pack. This digital app is not completely live yet, but it will allow you to start building your collection if you have cards to scan.

Warhammer Champions is a game with a lot of promise for its ability to bring in a wayward IP and creating something very new and very inventive. In a world of people being on their phones, they have utilized that in a way that is extremely satisfying and helpful to the game as a whole. 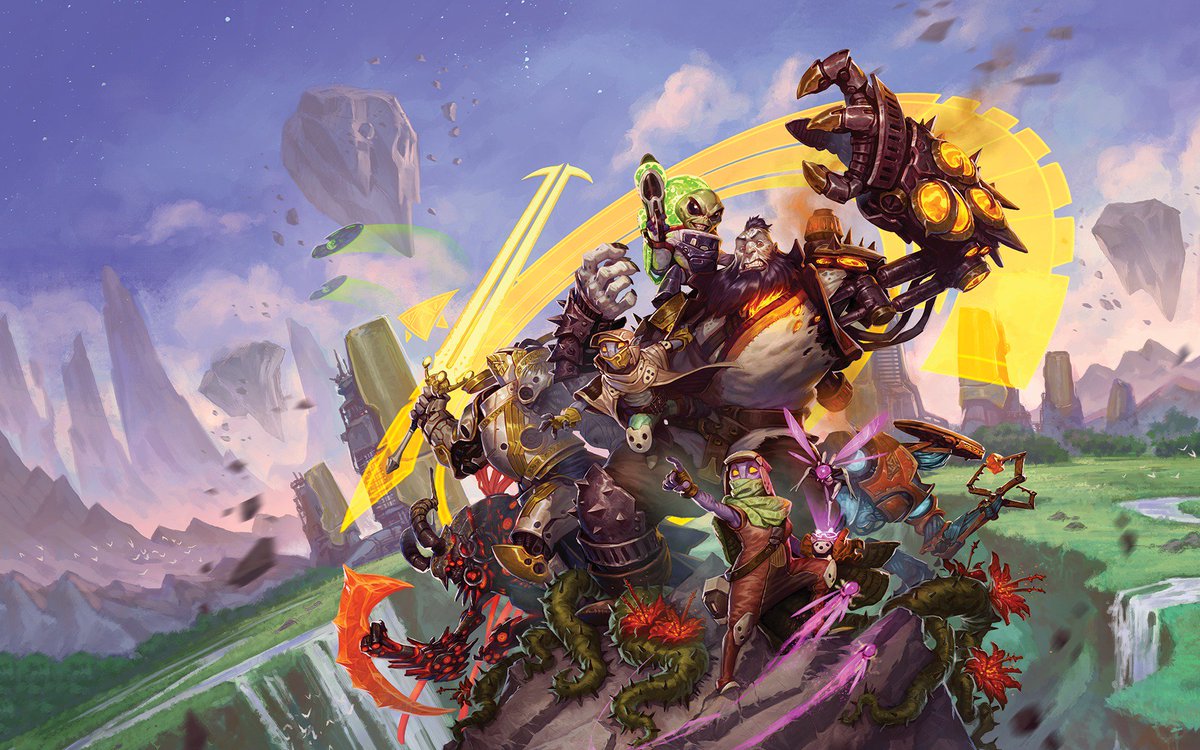 Both games talked about to day are quite different than existing cards games. The idea of no resource play being a huge aspect, along with creative new mechanical design being a close second. It is very interesting as a gamer coming from MTG and Netrunner and the like to see games that come at you with something new and expect you to take the time to learn them. In addition, I am a huge fan of the digital innovation of these games. Tracking deck with QR codes in Keyforge and Digital collection/community in Warhammer Champions is really great for the community and for the companies making the games. Let’s hope they end up being around long enough for a lot of other companies to learn something! How do you feel about these two innovative games? Is it just a splash in the pod or are they gonna be something great? Let me know in the comments and I’ll see ya next time!