Skip to content
Home » Boxed Culture: Cursed by a Catalyst

Cursed by a Catalyst

Over last weekend I bought and played Dragonfire, a co-op deck building game from Catalyst games. This game is a re-skin and update of a game they also made called Shadowrun: Crossfire. Today I wanna talk about my experience with the previous game in the series and how I felt about the new entry upon my first two plays through the quick-start rules.

When I first heard of Shadowrun: Crossfire, I got really excited. At the time I was playing a lot of Netrunner and immersing myself in the Android universe. Also, I had just finished playing one of the new Shadowrun PC games so I was all-in on the theme. When it says co-op deck builder on the box I got even more excited because one of my other favorite games is Legendary Encounters: Alien another cooperative deck builder. Finally, they spoiled Legacies-like features of the game. These were the ideas that as you play you will level up and can add stickers to your character sheets and get that RPG-like feel! All of these things came together to make me super excited to play the game. So I bought it and played it twice and never played it again. A true tale of disappointment from a game getting me so excited I ignored everything else and bought it. 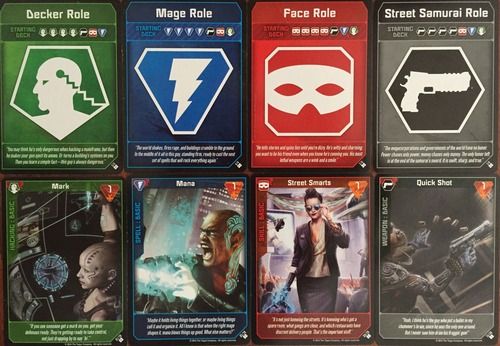 The main problems I have with the game is how they try to balance it with two players (my most likely playgroup for a game like this). In order to explain how they do this, I will need to review some of the game. The way you play the game is by picking characters that are each a given class. These classes determine their starting card in their decks. There are 4 classes /card types in the game and the majority of a player’s deck to start is made up of their class cards, with a few from other classes (4 of your class and one card from each other class). Similarly, encounter cards (the card you are challenged by in the game) have the class symbols representing their life. As you play cards during your turn you deal damage based on the types of symbols you play. If you are able to match the symbols on each level of the encounter card then you pass the level and move on to the next. When an encounter card has no levels left, it is defeated and money is distributed. The money is then used to buy new cards from the market. Seems simple right, but you may already be seeing the issue. 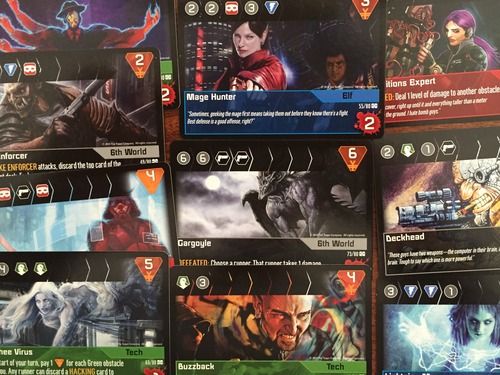 While the player characters are limited to one class, the encounter cards are not. So we were playing with two classes (for two players) but needed cards to challenge all four types of encounters. The way the game combats this is by adjusting how classes work in a two player game. In a two or three player game, each player, respectively, takes on an additional class. Seems great, right? The problem is that the deck composition doesn’t really change based on the second class you take. So while you can buy additional class cards from the market, you can get totally owned by the initial flop of encounter cards. Which is what happened to us twice when we tried Shadowrun originally. This made the game less than fun to play and so we never touched it again.

Flash forward to recently. I was very tempted to try Dragonfire for the same reasons as I was Shadowrun. I love fantasy and magic so it was even easier for me to enjoy the theme for Dragonfire. I was very wary though based on my knowledge that it was based on the Shadowrun game. I actually talked myself out of buying it twice as I could not find any good review that was critical of the game itself, only basic reviews going over mechanics and what they liked. Then a customer at our FLGS talked to me about how they had changed the game so it fixed a lot of the problems with the Shadowrun version. So I grabbed it, and here are my final thoughts. The game seems like it has promise, but I did not see any improvement initially over the Shadowrun version. The quick play rules were more than five pages long which is not really a quick start, a pet peeve of mine. My comrade and I initially got bitter when on the first turn we were already down to 4 health each and the two encounters had only taken a few damage. We died within the first two rounds. Then we tried a second time and died with in the first three rounds again. Frustrated and feeling salty I headed to BBG to try to get a feel for how people are judging this game. I keep finding nothing but great reviews which made me even more frustrated thinking I was missing some rules or something very important. After a bit of google search and reading/watching reviews I found out the quick start is not really designed to be played with 2 players; however, the main campaign is better balanced for 2-6 as was printed on the game box.

I am not sure if I will try it again or if I can even get the right amount of people to play (read 4 players). I hope at some point my feelings toward the betrayal I feel at this game and Catalyst Games will fade. But when your quick play rules are 12 pages long and your quick play scenario assumed four players without saying you should only play four players…I feel like maybe you don’t deserve my focus. Okay, enough of me being salty as a sailor. What did you think of either of the two games? Love it or hate it,  let us know in the comments. See ya next time!