I had the pleasure of going to Denver Comic Con this weekend and while there is not usually a ton of board gaming at DCC, there was one massive booth on the edge of the Merchant Mesa.  This booth was for a company called Archon Games. It was unusually large for a local board game company, but wow was I glad I stopped by. Having a media pass affords some pretty sweet privileges at most conventions. One of the main ones at DCC is getting into the Exhibitors halls an hour early and while most booths aren’t open it allows you to venture through the hall uninhibited. That is when I first saw Archon Games’ massive corner booth and knew I needed to come back and talk to these folks. I approached the booth and immediately introduced myself and I was pointed toward Adam, one of the lead artists and designers of Eschaton, the game featured at their booth. I started off by asking him where the company was located and what they were all about. He informed me that they were a local company from Boulder and they like to make games! Archon Games had a very successful Kickstarter and first print run for Eschaton, but they are not stopping there. They continued by getting booths at C2E2 as well as DCC. Getting the game in front of people at cons and even on Geek and Sundry’s How to Play with Becca Scott is something they are very keen on doing. And rightly so as the game seems super fun to play! 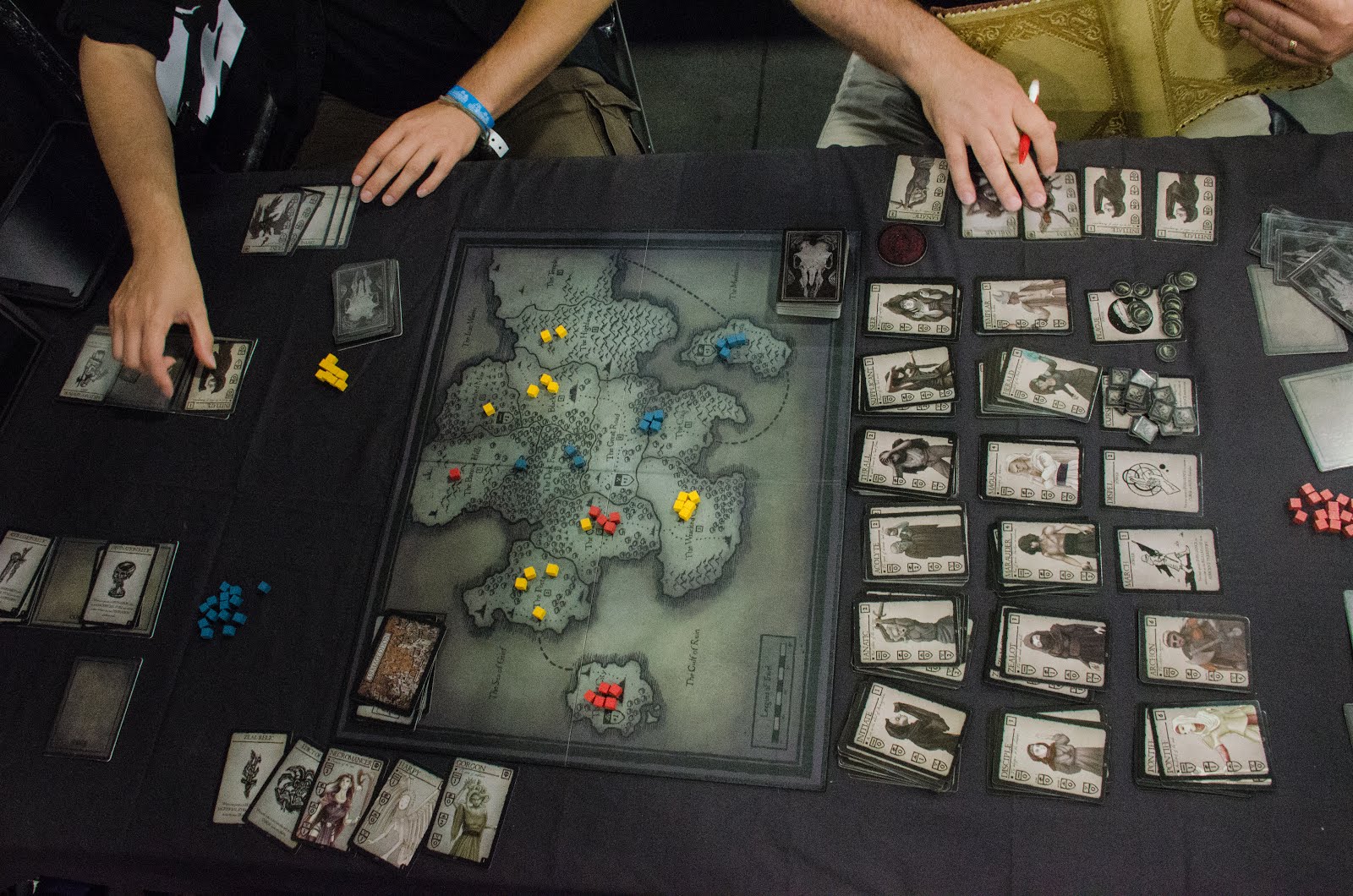 Eschaton is a deckbuilding territory control game fusing the best parts of Dominion and Twilight Struggle into one concise yet fulfilling game. In Eschaton, players are cult leaders who are trying to appease the Dark One before Armageddon. Players do this by obtaining powerful cards in their decks, positioning followers around the land, and completing strategic missions. Players can buy cards for their deck from a number of interesting and useful cultists, use their cards to get cards from the powerful arcana deck, spend influence to use special powers, or use aggression to bolster their regions on the board. When the game ends, the player with the most points is the winner. Overall the game sounded simple to learn but deep with strategy, which Adam confirmed. They did extensive playtesting to make sure that all the directions the game can take you are viable for winning. This made me giddy. From time to time deck builder games tend to end up like solitaire, which is majorly boring. But Eschaton offers tons of player interaction by allowing players to kill other players’ armies on the map, curse other players so that they lose influence, and plaguing regions to decimate their opponent’s forces. Some of these even get a bit more interesting with the upcoming expansion to Eschaton, Sigils of Ruin.

I ended my conversation with Adam by asking him about any other projects that are coming out and he pointed me to a brochure for their next Kickstarter. It is set in the same world as Eschaton and takes place far beneath the catacombs of the citadel. You play as a necromancer trying to farm precious resources from forgotten regions below. But it is far too dangerous for you to do on your own so you summon hordes of skeletons to do your bidding. Adam mentioned this was meant to be more of a worker placement game that was fast-paced, but it is still being designed so it could change. Expect to see more on this Kickstarter in August this year!

The Archon Games booth was an awesome treasure in the midst of t-shirts and pop minis. And in case you were wondering, yes, I did pick up a copy and I cannot wait to show it to my group. DCC needs to step up its board gaming a bit but this was def a good find. Thanks for reading and I will see you next time!