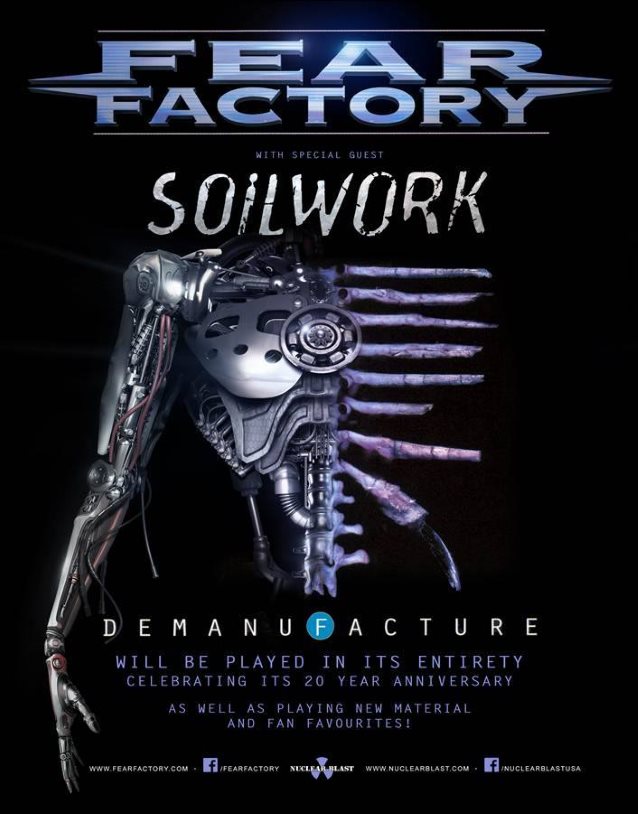 Fear Factory is one of those early bands for me. I remember hearing Obsolete in 1999 just after it came out and absolutely falling in love with it. Fear Factory catches a lot of flak in the metal community for some of their more questionable decisions (avoid the album Digimortal) but, for the most part, I’ve still continued to enjoy their music.

I haven’t been such a fan of them that I would see them without good support, though. Soilwork provided that opportunity for me on the 24th of April. This was my third time seeing Soilwork and my first time seeing Fear Factory. Even though Fear Factory headlined, I’ll be talking much more about Soilwork.

Fear Factory played the entire Demanufacture album from start to finish. It was pure nostalgia for me. Not only because of the fact that it was recorded in 1995 and served as a stepping stone in my musical interests’ progression but also because it’s completely inspired by The Terminator films. The sound was album quality. Burton was perfect in his delivery, Dino was killing it with the guitar and their current drummer was able to hit the double bass just as well as any of their previous guys.

Prior to this, Soilwork played 12 songs. None were played from Steelbath Suicide, A Predator’s Portrait, or Sworn to a Great Divide, but every other album got at least one song (The Panic Broadcast and the new one each got two songs while Stabbing the Drama had three songs).

The set opened with “The Ride Majestic”. Bjorn Strid was standing on the amps, full of energy, intensity, and passion. “Nerve” was next, the crunching guitar and atmospheric keyboards coupled with the anthem-like chorus was palpable. “The Chainheart Machine” was one of the biggest and most pleasant surprises. Unable to reach the same high-pitched vocals of the year 2000, it had a deeper and more aggressive sound. It was also played at a much quicker tempo than the original and the drumming was extremely powerful.

“The Crestfallen” also carried much more power than the studio version. “Follow the Hollow”, the song that introduced me to Soilwork, was great to hear (even if it is played every show). I picked up a three-quarter baseball tee with the Natural Born Chaos album cover and the chorus to the song on the back. “The Living Infinite I” followed the Hollow and had this real cool speaker to speaker movement with the guitar effects. “Whirl of Pain” was another pleasant surprise. Strid’s vocals were very passionate and took on a bit of the feel they have when he sings for The Night Flight Orchestra.

“Rejection Role” was a total nostalgia trip for me, reminding me of my days in high school, hanging outside the school with my friends by the little Russian owned pizza place (shout out to Capri Pizza for still being badass). “Let This River Flow” was definitely the ballad of the night, all of us singing along. “Late For the Kill, Early For the Slaughter” was very fast and aggressive. “Stabbing the Drama” ended the night, all of us singing along to that one as well.

It was definitely a night to remember. I’m seeing Dream Theater on the 3rd of May so you’ll be seeing that update soon.