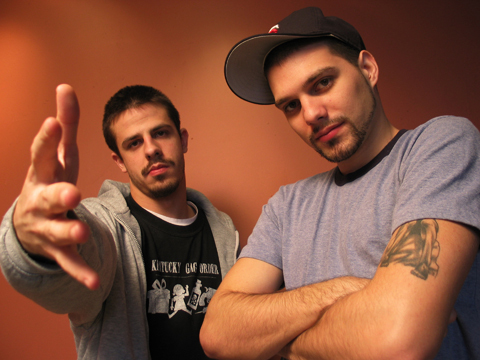 There are many things that Eyedea & Abilities was known for.  DJ Abilities is a well respected DJ who showed time and time again that he was competent on the vinyls and Eyedea is known for being a very smart and talented rapper.  In 2010, Eyedea died at age 28.

I was quite shocked.  I had seen him perform in 2009 twice.  Once with Atmosphere, Aesop Rock, and Murs and another time as a headlining act in a very small venue.  It was right around the time that I saw Sage Francis perform for the first time in 2010 that Eyedea’s death was reported.

Eyedea was known for telling stories, using an expansive vocabulary, and challenging some of the norms of hip hop.  He was also known for being a very vibrant performer with a little bit of a troubled mind.  That much is evident in the music and lyrical content, especially in their final album, “By the Throat”, released in 2009.

I first came across Eyedea & Abilities in 2008 when a friend of mine made a mix CD containing some of their work for a road trip I was taking to California.  It wasn’t long before that final album came out and I got to really appreciate the work they created.  I was absolutely stoked when I learned that he was going to be on that Atmosphere tour.

In 2001, he competed in the Blaze Battles on HBO.  He was still a teenager, but he was going against some pretty big names on the scene (one of them even from New York, where the event was filmed) and he absolutely embarrassed his opponents on his way to winning the championship.  The winner got to sign onto the record label that KRS-One owned, but Eyedea only went to see if he could win.  He chose to remain with Rhymesayers Entertainment and produce the music that he felt would not be as restricted because it was an independent label.

In 2001, Eyedea & Abilities teamed up for the very first album, called “First Born”.  The music is relatively dark and the snares hit very hard.  There are songs about the horrors of Vietnam, about the dangers of rainstorms, as well as just celebrating hip hop in general.  One song in particular that sticks out to me is “Color My World Mine” which talks about an artist and the possibility of paintings telling/predicting future events.  It’s definitely a really cool premise

In 2004, a more upbeat and DJ oriented album, “E&A” was released. The song “Now” quickly became their most famous song. This is also when Eyedea became very well known for his ability to rap very quickly. There are a lot of songs where DJ Abilities seems to have a large degree of freedom to scratch and experiments with beats.

2009 ushered in “By the Throat”, a much more emotionally charged album with a fair amount of guitars and punk influences. This is probably my favorite album from them. “Burn Fetish” has a lot of really cool one liners that I can identify with quite a bit. It touches on the concepts of loneliness and isolation. “Smile” is a song that I have personally witnessed covered by Brother Ali live.

Eyedea’s legacy lives on. Aesop Rock, Atmosphere, Blueprint, and many others have created songs dedicated to him and the type of life he lived. He is still celebrated in the underground circuit and praised for his ability to freestyle as well as his intelligence. I am fortunate enough to have seen him twice and for that I am thankful.

We’ve got a whole slew of album reviews coming in the new few weeks. See you next time!