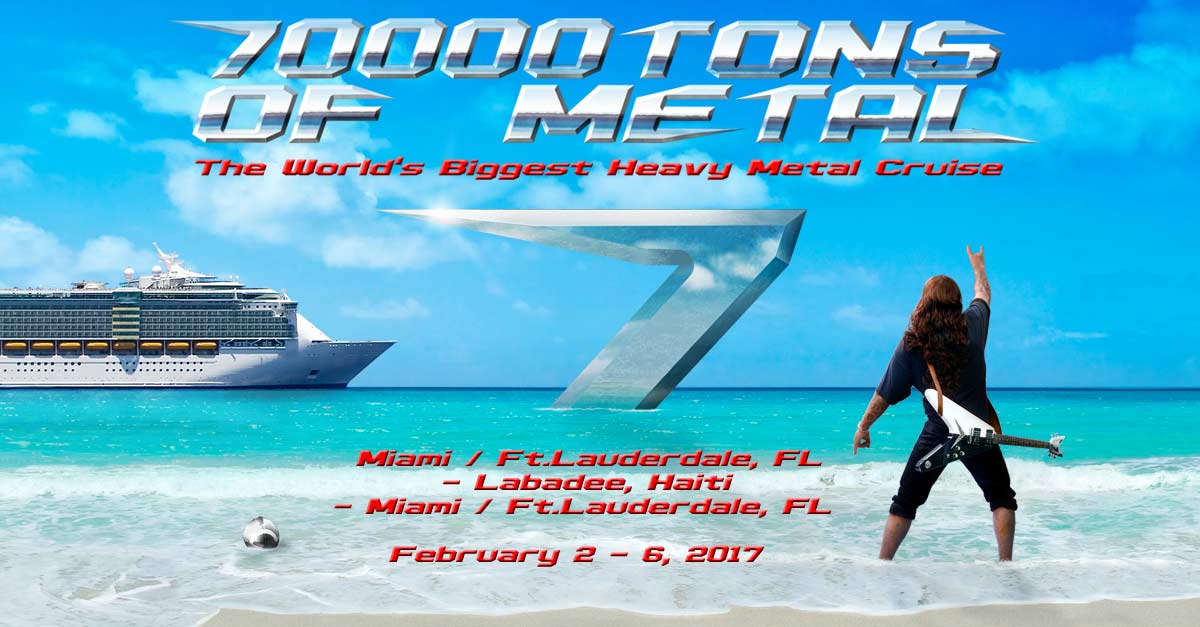 It’s 2017 and it’s January so that means this month is dedicated to prepping up for the next 70,000 Tons of Metal cruise.  This year will be my third year going and I am beyond ecstatic.  As of today (3 January 2017), there have been 45 out of 60 bands announced.  My gameplan is to cover 12 bands every week, except for the final week because at that point I will already be in Florida and not every band will be announced at that point.  The order in which I review these bands will be in the order that they were announced.  I will showcase a song from each band as well as my general impression of that band.  Some of these names will be bands that I am just hearing for the first time.  I will probably just select the first song that pops up on YouTube and make a determination from there.

As is the case with many people I know, I’m honestly not super familiar with their work.  I can definitely pick them out of a crowd and I can successfully identify them when comparing them to other thrash bands.  Anthrax is known for being a part of Big Four, a San Francisco Bay Area movement in the early 1980s that is significant in establishing the thrash genre as well as some controversy because of their name during the anthrax scares in the early 2000s.  Anthrax is a huge name and have enjoyed some occasional success.  Their sixth album charted #7 and their tenth album charted #12 on the Billboard 200 with their most recent album peaking at #9.  I will likely catch at least part of one of their sets just out of curiosity.

Amorphis returns to the cruise after a two year break.  I caught one of their sets but fell asleep for part of it and couldn’t understand why.  I am likely to give them a full set again because I have been told their performances are much more energetic than what I felt I experienced.

I don’t entirely know how feel about this band.  There are three singers in the band.  One is a female, the other two are males who offer a clean/harsh dynamic.  The music takes on a poppy vibe with club style electronics but also a double bass drum and power chord guitars.  It pretty much reminds me is Ke$ha or Rhianna sang in a metal band.  If I see them, it will be just for the lolz or because I’m curious and nothing else is playing.

I am absolutely thrilled that Therion is back for this year’s cruise.  I will definitely see both sets just like I did back in 2015.  Therion is believed to be the first official symphonic metal band, taking their name from a Celtic Frost album (who is believed to have been the first band to use symphonic elements).  Therion is a fluid band, having had a million members over the course of nearly thirty years and some of the live members aren’t even featured on their newer albums.  This was the first announcement that I got really excited for.

Grave Digger is known for being part of the power metal movement in the early 1980s in Germany.  They were on the cruise in 2015 and they toured with Blind Guardian on their last two North American tours.  If Grave Digger sounded like the song I provided more often I would see them this time around but their performance is very Dad Metal.

You know, I was pretty stoked when I heard that Death Angel was touring with Sepultura and Krisiun quite a few years ago but Death Angel’s live performance left a lot to be desired for me.  Many people are excited for them to be on the cruise so I might check them out if nothing else is going on but they won’t be a priority.

I am definitely stoked for this band.  This is one of the first metal bands I ever got into and it’s nice to have a proper folk metal band on board.  I will probably check out at least one set, maybe two.

This is another band that I am particularly thrilled to have on the boat.  While I am not super familiar with their full discography, I know that every time I hear them I have a blast.  I will be checking out at least one set of theirs, maybe two.

Kamelot’s inclusion this year makes me excited for a few reasons.  First, I get to witness Tommy Karevik live again and his vocals are absolutely phenomenal.  Second, there is a large chance that Amanda Somerville will be present and she provides an amazing atmosphere for the band.  And third, Simone Simons of Epica is married to Oliver Palotai, the keyboardist.  She toured with them once as a surprise guest and having her on board the ship again would be fucking fantastic. The fourth reason is that Alissa White-Gluz from Arch Enemy will be on board and I think that she could do a few songs with them.

Suffocation is known for being part of the New York death metal scene as well as an early pioneer of technical death metal.  My first exposure to Suffocation was from a friend who was given one of their CDs by a 50-year-old in 2002 and he showed them to me.  I was pretty impressed despite not being into death metal at the time.  I never fully explored their sound, but I did get to see them recently with Cannibal Corpse and Nile and I was thoroughly enthralled with their cohesion in the live performance they gave.  I will see them at least once this year.

Orphaned Land is another band that I am really excited about.  They have such a wide variety of sounds and I have never seen them perform.  I am not overly familiar with their work but I love the Middle Eastern feel the band has.  I will see them at least once, maybe both times on the ship.

In addition to being known for video game music, Powerglove also does renditions of Saturday morning cartoons.  I am a huge fan of their work and their live show.  I may not be able to see both of their sets, but I will absolutely try to make it happen.  I’m glad to see that they are playing live and hoping to see some new material.

That’s part one.  Twelve bands.  Next week, I will discuss the next twelve bands.  I hope you’re just as excited as I am!